As first reported in Military Times, White Coat Waste Project has just filed a complaint with the Department of Veterans Affairs Inspector General requesting an investigation into new evidence of abuses in dog experimentation laboratories at the McGuire Veterans Affairs Medical Center (VAMC) in Richmond, Virginia.

WCW’s new investigation has documented that McGuire VAMC staff currently conduct experiments on dogs as young as 1-year-old that include:

If these details weren’t horrific enough, WCW’s research has revealed that at McGuire VAMC: 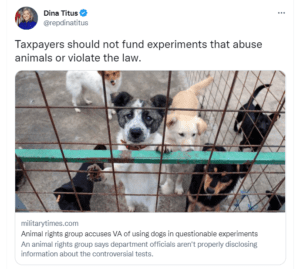 Just as the VA was held accountable for delivering subpar care to our nation’s veterans, it should answer for the possible abuse of animals and waste of taxpayer funds on haphazard research. Members of both parties have asked the federal government to take a closer look at the animal research it administers, in an effort to save innocent animals from harm and reduce expenses when viable alternatives to animal-based testing exist.

The Inspector General has confirmed that the agency will be reviewing the evidence, but we need your help, too. Please join WCW by taking a moment to email your Members of Congress and ask them to end cruel, secretive and wasteful government dog experiments.

please put an end to this

please put an end to this

This must stop…. it is sick inhumane torture. The fact that the VA performs sick experiments on dogs is disgusting!! Animal cruelty is against the law…. for you, me and the Aholes at the VA hospitals.

There’s no reason to use & abuse animals in these unnecessary experiments. You would not treat your home pet like this. Digital means have been proven more effective & less expensive. I don’t appreciate howdy tax dollars are used. STOP NOW!!!