Yesterday, we co-hosted a Congressional briefing on Capitol Hill to publicly launch our new Spending to Death investigative report and an advocacy campaign to expose and end taxpayer-funded government experiments on dogs. A half-page feature in the Washington Post broke the news of our report and the event.

We were honored to co-host the briefing with Congresswoman Dina Titus (D-NV) and Congressman Ken Calvert (R-CA), both of whom are long-time champions on efforts to cut wasteful government spending on animal experiments.

Our inaugural event on the Hill attracted a standing-room-only audience representing dozens of Democratic and Republican members of Congress. 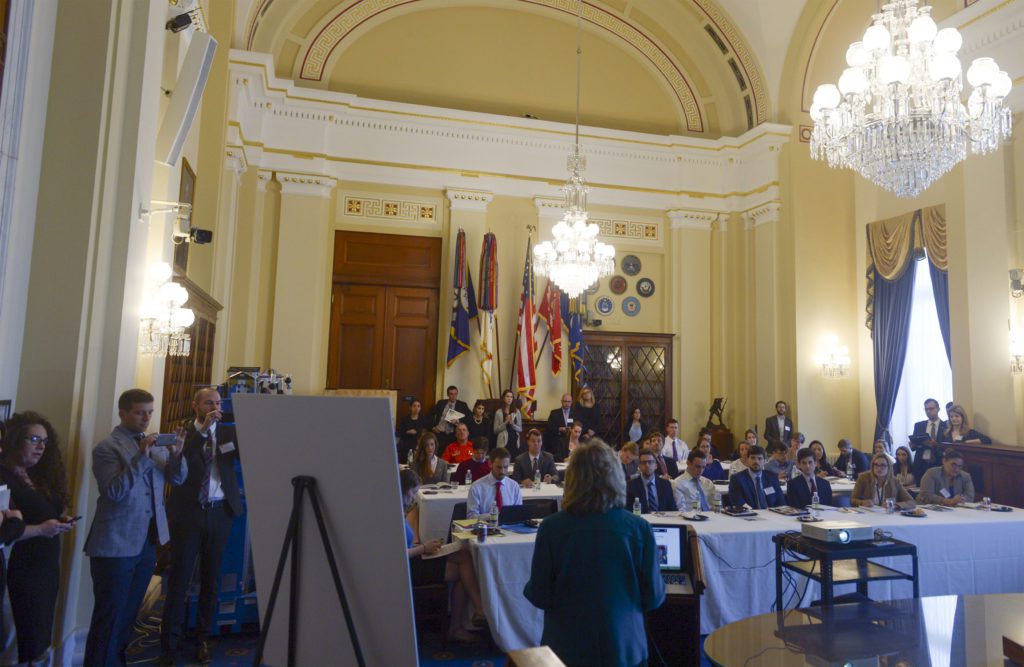 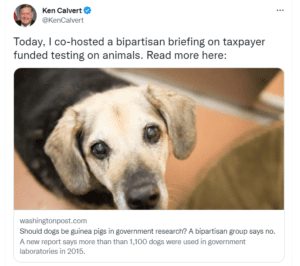 Rep. Titus delivered eye-opening and inspiring remarks about her successful work to expose and end wasteful taxpayer-funded experiments, and why she supports WCW.  A video of her speech is below: 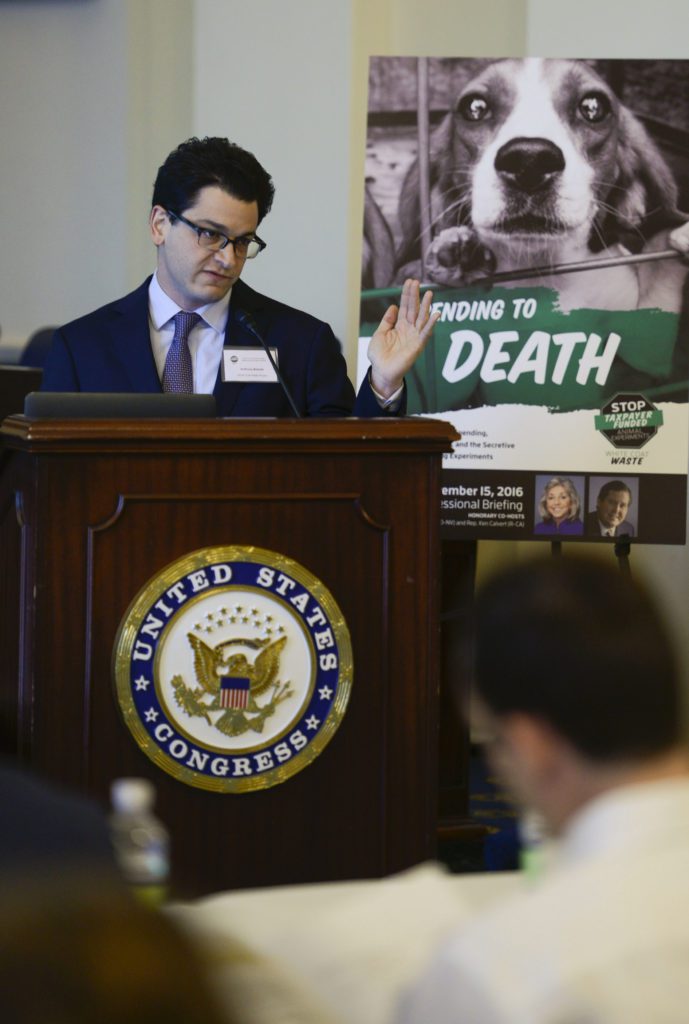 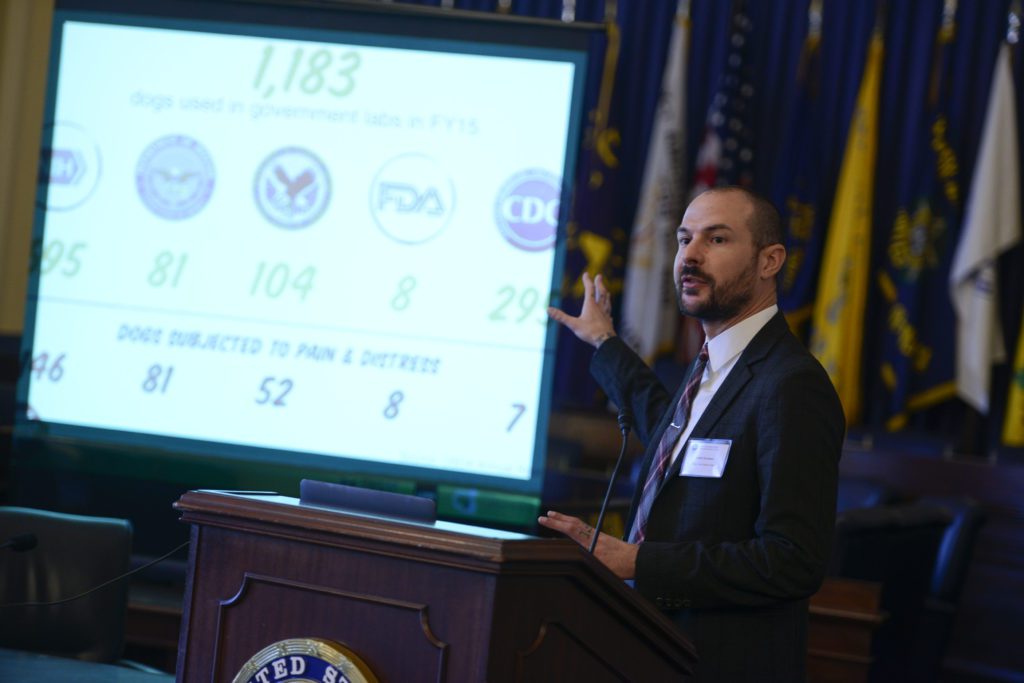 WCW vice president Justin Goodman presented the findings of the “Spending to Death” report and outlined our recommendations for reforms.

We need your support!  Send your Members of Congress an email urging them to end taxpayer funding for wasteful dog experiments in government laboratories.

Please end taxpayer funding on cruel and unnecessary experimenting on behaves and other dog breeds and mixes. We are better than that. The dogs need your voice.

I want the government to stop this horrendous experiments to innocent beautiful beings! Animals deserve a good life in harmony with nature.

Not with my taxes, needless studies, needless death, I’ve read about some of the testing being done and it’s out of control

Please stop the testing on animals. There are is no need for it . Dogs and other animals have feelings of pain, terror, fear..dogs should be loved & taken care of NOT tortured! There is now alternative to animal testing that would be much cheaper and more accurate

THIS IS INHUMAN IT NEEDS TO STOP NOW

It’s LONG past time we stop using animals, ESPECIALLY companion animals like cats and dogs in cruel and totally unnecessary experiments. The people are watching you and how you all take action on this issue. Be our heroes and end this wasteful and heartbreaking practice.

inhumane treatment of animals needs to stop, along with full disclosure to the public

inhumane treatment of animals needs to stop, along with full disclosure being made to the public

My money should never go to ANY animal abuse

Dogs should never be used for medical experimentation. Please, no funding for cruelty.

This is pointless cruelty!

Please stop funding the cruel practice of experimenting on dogs to test out drugs or any other experiments. We are supposed to be a civilized country not a place for such cruel acts!

Stop this cruel and unnecessary experimenting on dogs. How archaic!

Such a sad example of a complete lack of humanity.

This seems to be an arcane practice! I don’t any of my tax dollars to fund it.

I don’t want any of my tax dollars to find these experiments.

I don’t hold out much hope. By the time the FAA gets around to making a decision the technology will have changed. Wo28#n&dlu17;t it make more sense for the FAA – and its compatriots around the world- to set some standards. Then the gadget makers could pass a test rather than wait for a test.

Thank you to Congresswoman Dina Titus (D-NV) and Congressman Ken Calvert (R-CA), both of whom are long-time champions on efforts to cut wasteful government spending on animal experiments. Keep up the good work.
Personally, I AM HIGHLY OFFENDED AND ANGRY THAT THE U.S. GOVERNMENT CONDONES ANIMAL “RESEARCH” AND USES MY TAX DOLLARS TO DO SO. CRUELTY TO ANY SENTIENT BEING IS NEVER OK.
GANDHI:
THE GREATNESS OF A NATION AND ITS MORAL PROGRESS CAN BE JUDGED BY THE WAY IN WHICH ITS ANIMALS ARE TREATED.
I HOLD THAT THE MORE HELPLESS A CREATURE, THE MORE ENTITLED IT IS TO PROTECTION BY MAN FROM THE CRUELTY OF MAN.