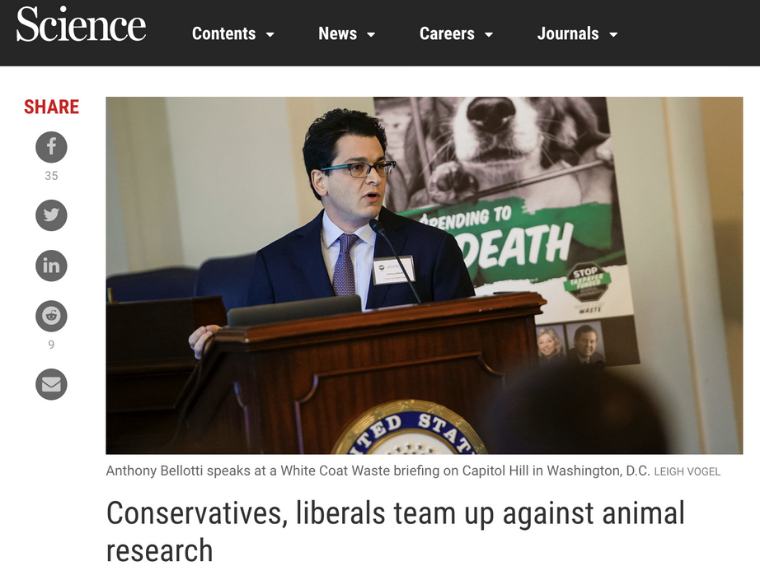 “Painful, bizarre, and wasteful experiments.” Buying dogs “just to cut them apart … and kill them.” These statements might sound like the rhetoric used by extreme animal rights groups, but they come from White Coat Waste—a new, unlikely coalition of fiscal conservatives and liberal activists that aims to end federal funding for research involving dogs and other animals by targeting people’s pocketbooks in addition to their heartstrings. Last week, the group made its first foray into the political arena, holding a briefing on Capitol Hill in Washington, D.C., for reporters and congressional staff. Speakers called on policymakers to launch an audit of the agencies that fund animal research, and depicted animal studies as another example of big government spending run amok.

“I can’t think of any right-wing groups that have taken on animal research before,” says Tom Holder, the director of Speaking of Research, an international organization that supports the use of animals in scientific labs. “It’s a new way to crowbar off policymakers who might not otherwise support” efforts to end the use of animals in research.

White Coat Waste, based in Washington, D.C., is the brainchild of Anthony Bellotti, a former Republican strategist who has consulted for campaigns against Obamacare and Planned Parenthood. His opposition to animal research began in 1995, when, in the summer between high school and college, he worked in a hospital laboratory that was conducting heart studies on pigs and witnessed experiments he saw as cruel. After he became a political consultant, he hit upon the idea of framing such research as a waste of taxpayer money. “That story was being told in the Planned Parenthood and Obamacare debates, but not in the anti–animal research movement,” he says. “I wanted to unite the animal lovers and the liberty lovers.”

Bellotti founded White Coat Waste in 2013, though he says the group has become active only since last year. That’s when it had its first big exposure in Socialized Science, a documentary executive produced by conservative political commentator Glenn Beck. Replete with images that wouldn’t be out of place in a video produced by an animal rights group—lab mice with blood coming out of their eyes, monkeys with metal screws in their heads—the program features comments from antitax conservatives, including Representative Tom Marino (R–PA), an early Donald Trump supporter who calls for more oversight of government agencies that fund animal studies.

But White Coat Waste made its biggest splash last week with its Capitol Hill briefing. The event was co-hosted by Representatives from both sides of the aisle—Ken Calvert (R–CA), a spending hawk, and Dina Titus (D–NV), who, in response to a campaign by the animal rights group People for the Ethical Treatment of Animals (PETA), helped end psychological experiments on baby monkeys at a National Institutes of Health (NIH) lab last year. She vowed to work with White Coat Waste and her congressional colleagues to bring more transparency to government research and help phase out wasteful and unnecessary experiments.

Those were also the major themes of a report White Coat Waste released timed to the hearing, Spending to Death. The document, which mainly focuses on federally funded dog research, claims that more than 1100 canines are being subjected to cruel, unnecessary experiments in government labs. It also slams what it calls redundancy in such research, citing, for example, three separate NIH experiments on sepsis and hemorrhage in dogs.

Holder questions those claims. For instance, “all sepsis studies aren’t the same,” he says. “They’re purposely trying to misinform the public.” Dog research alone, he says, has improved our understanding of diseases like cancer and hemophilia and helped develop pacemakers and organ transplants.

But White Coat Waste also alleges that, aside from NIH, most federal agencies are opaque about how many dogs they use, the details of these experiments, and how much they cost. “There is a staggering lack of transparency and a lack of accountability,” Bellotti says.

His group hopes to end most, if not all, of the dog experiments. Bellotti says his organization already has a mailing list of 350,000 names, which he’ll use to pressure Congress to require federal agencies to provide more details about the studies they conduct—and to defund labs or programs engaging in what the group considers wasteful and unnecessary research. It will also do more digging of its own, using records requests to shed more light on this research.

The group hopes that publicity may be enough to shut down some of these studies, even without congressional action. Public opinion could help; according to a recent Pew Research Center poll, 50% of Americans now oppose animal research, and the government itself has ended its support of some animal studies, most notably biomedical research on chimpanzees.

Past efforts to forge odd-couple alliances have produced mixed success, however. In the late 1980s and early 1990s, environmental groups joined with antispending conservatives to try to end funding for what they considered wasteful, environmentally damaging projects. Liberal and conservative coalitions have also tried to kill military projects, such as particular weapons systems. But partisan politics often overwhelmed the coalitions that could be built against particular projects. And the new White Coat Waste effort is likely to face substantial resistance from influential patient groups that are generally supportive of biomedical research, and have deep links to both Democrats and Republicans.

Bellotti admits his group is starting small—just focusing on dogs in government-run labs. But he says it will eventually target all animal studies supported by taxpayer dollars, including millions of mice, rats, and other animals. “Anything that’s getting federal funding is fair game for us,” says Justin Goodman, White Coat Waste’s vice president for advocacy and policy (and a former director of laboratory investigations at PETA). “We’re laying the foundation for bigger things.”

Still, there are some animals the group won’t touch. The untold millions of mice, rats, and even dogs owned by pharmaceutical companies, biotech corporations, and other industry labs are off the table says Bellotti, noting the business interests of his more conservative allies. “If we start going after the private sector, some of our supporters may have a problem with that.”

For its part, NIH says that animal research continues to inform both human and animal health. It also notes that funding agencies and institutional review boards evaluate all animal research, only approving what they consider necessary and humane studies. “All animals used in NIH-funded research are protected by laws, regulations, and policies that ensure the smallest number of subjects and the greatest commitment to their welfare,” the agency says in a statement to ScienceInsider.

Holder also questions the group’s basic claim: that ending funding for animal research would save taxpayers money. “Addiction, diabetes, and other diseases cost the public millions of dollars a year,” he says. “If taxpayers don’t pay for this more basic research, they’ll pay for the effects of not doing it.”