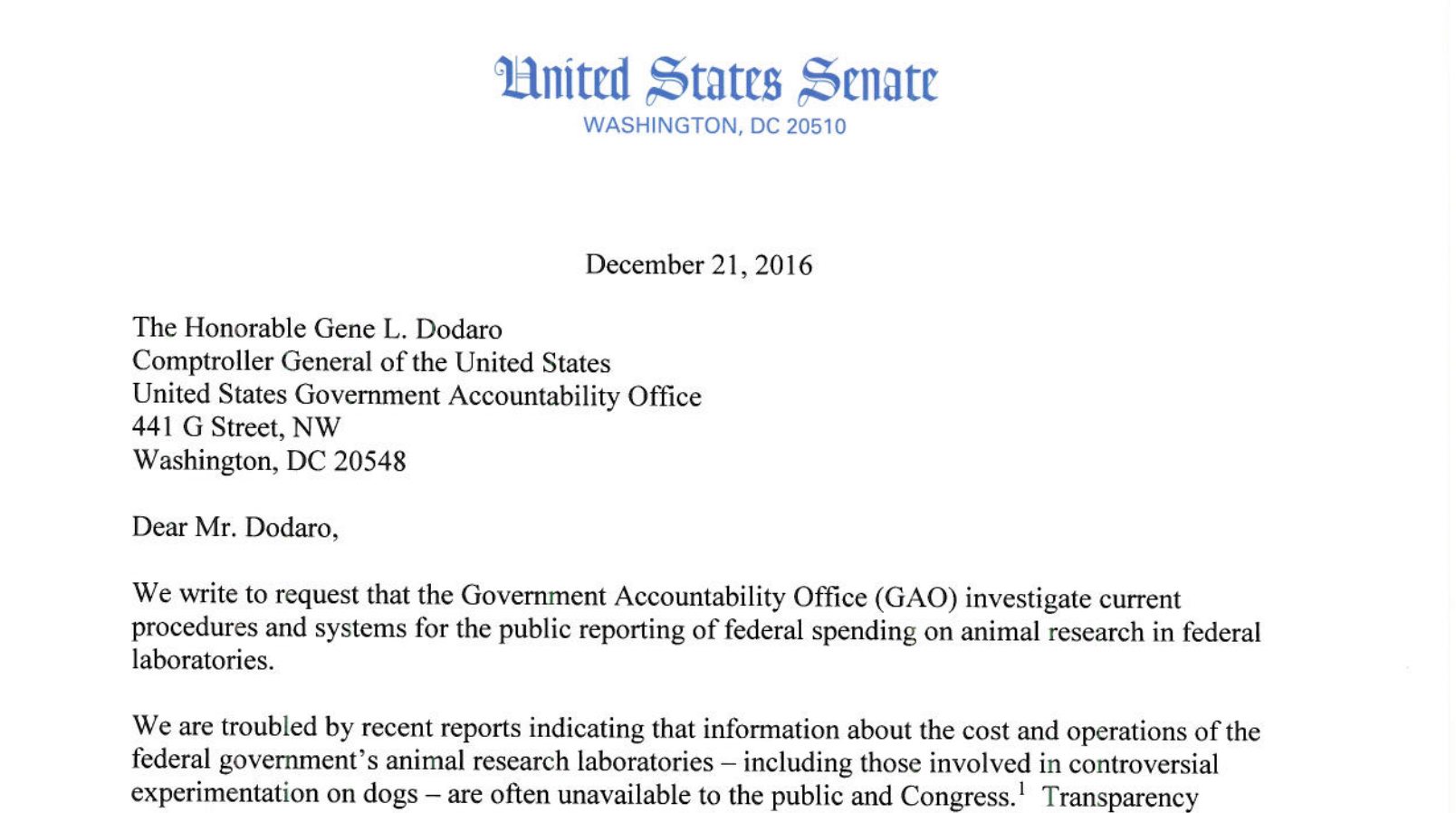 2/27/17 UPDATE: The GAO has agreed to conduct this first-ever audit of spending on and transparency about federal animal experimentation.

Following the White Coat Waste Project’s recent exposé of secretive and wasteful dog laboratories at the Department of Veterans Affairs, Pentagon, National Institutes of Health and other agencies, influential U.S. Senators are joining a bipartisan group of House members in calling for increased scrutiny of federal animal experimentation programs.

As reported in the Associated Press this morning, Sen. Jeanne Shaheen (D-NH)—joined by Sens. Cory Booker (D-NJ) and Elizabeth Warren (D-MA)—sent a letter to the Government Accountability Office (GAO) requesting an audit of how federal agencies publicly disclose the purpose, methods, cost and outcomes of their controversial experiments on dogs and other animals. They are also seeking recommendations for what can be done to improve the accuracy and completeness of this information.

In the letter, the Senators—who serve on powerful committees with oversight of agencies conducting animal experiments—cite our recent “Spending to Death” report, and write:

We are troubled by recent reports indicating that information about the cost and operations of the federal government’s animal research laboratories – including those involved in controversial experimentation on dogs – are often unavailable to the public and Congress. Transparency about federal spending on animal research is especially critical given some evidence suggesting that such research is often wasteful and inefficient.

Government transparency and accountability are cornerstones of our democracy.  The public has a right to know how federal agencies spend their tax dollars and whether this spending improves American lives.  Congress must also have access to this information in order to assess the effectiveness of government programs and prevent waste, fraud and abuse.

A new national poll shows that a majority of Democratic and GOP voters want to cut federal funding for animal experiments, and two-thirds believe federal agencies should be required to inform the public how many animals they use and how much money they spend on animal experiments.

If you haven’t yet, please contact your Members of Congress and urge them to help end wasteful experiments on dogs and other animals in government laboratories.

We have a right to know what and how our tax dollars are being spent on.

Please stop cruel and brutal animal testing in labs. This creates suffering and even death to innocent animals. We need transparency of tax payers funding for these horrendous acts

Legalized animal abuse and cruelty should not be allowed by a civilized, caring government.

This needs to stop.its cruelty. Animal cruelty is a felony in every state. Our government needs to be equally accountable. Not only that, but most testing can be achieved synthetically now. I want to know what the purpose is for running beagles on treadmills until they have fatal heart attacks, and I know that’s not the only things they’re testing on, if they’re willing to spend tons of money to do this to beagles. This needs to stop.

NEEDS TO STOP
Experiment on The Murder’s NOT on The Inocent
Not ON THE PURE HEARTS THAT HAVENT HURT NO ONE….THIS NEED TO STOP…ITS WRONG…

Stop this abuse on all animals !!!

Stop the torture! We need to know how our money is being spent!

This is pure torture that has caused indescribable suffering and death of innocent animals. These are TRASH EXPERIMENTS.Man should be ashamed of his INHUMANITY. DEMAND AN END TO ALL ANIMALS EXPERIMENTS NOW!!!!

STOP THIS INHUMANE CRUELTY TOWARD ALL ANIMALS! WHO GIVES “HUMANITY” THE RIGHT TO TORTURE INNOCENT ANIMALS? CERTAINLY NOT THEIR CREATOR! ?

Most important is not using animals for our purpose.The tests have been done over and over again, same results every year.Not necessary!We should be able to opt out, I certainly don’t want my $$ going to waste!

I believe tax payers should have the right to withdraw their tax dollars from programs that go against their moral beliefs. Any form of animal cruelty, including testing is repulsive to me. I am a vegan and an advocate for the humain treatment of all living beings. The use of my tax dollars to fund any form of cruelty on animals is in direct violation of my core beliefs. We should have the right to request that our hard earned money does not fund such practices. These agencies have an obligation to be transparent in their funding, studies and operations. I am beyond upset that this is happening!

TORURING ANIMALS IN LABORATORIES?
NOT WITH MY TAX DOLLARS!!!!!!!
I’D RATHER YOU USED MY TAX DOLLARS TO MAKE SURE NO ANIMALS ARE ABUSED ANYWHERE FOR ANY REASON!
IN FACT, I DIRECT YOU TO USE MY TAX DOLLARS TO PROSECUTE ANIMAL CRUELTY!
ELIMINATE SYSTEMIC ANIMAL ABUSE!
IT’S TIME.
You’ll sleep better.