Government agencies openly admit that animal testing for the safety of chemicals and drugs is slow, expensive and inaccurate compared to modern cell-based and computerized tests. Yet, they still spend untold millions of tax dollars each year on toxicity tests in which rats, mice, dogs and other animals are force-fed enormous doses of cosmetics ingredients, foods, natural supplements, drugs, and other substances. What’s worse, no one knows how many animals are used, for what tests or what it costs taxpayers. A new bipartisan bill supported by the White Coat Waste Project would change that. 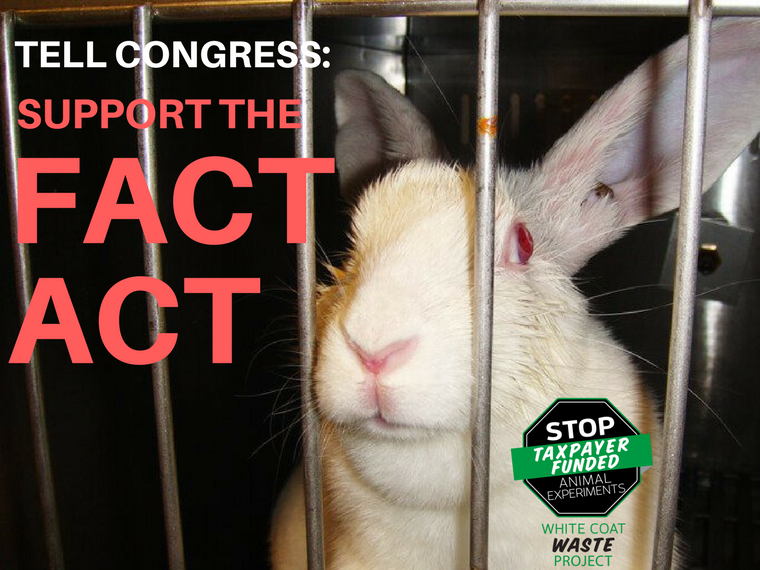 “For two decades, I have played a key role in the efforts to replace wasteful government animal tests with modern alternative tests that save significant time, taxpayers’ money and animals’ lives. The FACT Act will ensure that Congress has the information necessary to determine if federal agencies are meeting their mandates to replace expensive and unnecessary animal testing whenever possible.”

An ongoing review by the White Coat Waste Project found recent and ongoing government toxicity in which mice and rats were forced to inhale or swallow enormous doses of substances including green tea extract, French fry byproducts, herbal supplements sold for sexual dysfunction, gasoline and even cosmetic ingredients. Some individual animal tests for a single substance can cost taxpayers $4 million, use thousands of animals and take more than five years to complete.

Exposing and ending wasteful federal spending on unnecessary animal experimentation is an effort that transcends partisan politics. A recent national poll found that two-thirds of voters—73% of Republicans and 68% of Democrats—want more transparency about taxpayer-funded animal testing and that six in 10 want to cut federal funding for animal experiments.

The introduction of the FACT Act follows a recent federal audit request led by Reps. Calvert and Titus regarding how government agencies publicly report spending and other details about animal experiments they conduct. The request was based in part on a White Coat Waste exposé of secretive dog experimentation in government laboratories.

Please take a moment to email your Members of Congress to request that they cosponsor the FACT Act (HR 816). Click the button below to send a letter now.

Animal testing is unnecessary. Please support . I am especially enraged by the number of the most popular, successful makeup and skin care companies in the US continue to torture animals needlessly.

please please support this positive bill to help animals from needless testing and lives of torture. thank you!

Need to put “kind” back into mankind.

Please support this bill, which calls for and end to archaic, useless animal experimentation, in the name of decency, humanity and enlightenment. We no longer NEED to force beagles to inhale Windex through tubes taped to their mouths, or spray oven cleaner into rabbits’ eyes. The enlightened companies of the world know this and use alternate methods of testing products. Please please join them in doing so.

We have a duty to help the voiceless and vulnerable. Please do the right thing for them,our future and our conscience.

[…] it costs taxpayers. The bipartisan Federal Accountability in Chemical Testing (FACT) Act (HR 816) (http://blog.whitecoatwaste.org/2017/02/02/new-bipartisan-bill-will-increase-animal-testing-accountab&#8230😉 improves reporting by federal agencies so Congress and the public can measure the […]

The only point in preventing public knowledge would be to avoid listening to complaints for noncompliance. If there is compliance then there should be no reason not to disclose.

[…] with a bipartisan Congressional coalition led by Representative Ken Calvert (R-CA) to introduce the Federal Accountability in Chemical Testing (FACT) Act (HR 816). The FACT Act requires the EPA, FDA, NIH, DOD, USDA and other federal agencies to report the number […]

I don’t know how animal abusers can live with themselves. Why do we need to even ask the government to help stop abuse? They should want do it on their own, without the need for many letters and animal-loving supporters. Why does it take so long to get through legislation to protect animals? They are being tortured and killed while waiting for slow-moving humans. Animals feel pain, fear, loss, just like humans! Animals deserve to be treated with love and care. When will more humans become humane?

Please support this bill, which calls for and end to animal experimentation, in the name of decency, humanity and enlightenment. We no longer NEED to force beagles to inhale Windex through tubes taped to their mouths, or spray oven cleaner into rabbits’ eyes. The enlightened companies of the world know this and use alternate methods of testing products. Please please join them in doing so.

Here’s a thought for all of you to ponder: You didn’t see one of these scientists or doctors “step up to the plate” to be tested instead of these dogs — did you? Absolutely not! They have tested for Muscular Dystrophy, but they didn’t tell you that Agent Orange from the Viet Nam War causes Muscular Dystrophy. Of course they didn’t tell you! They used Agent Orange to kill the foliage on the trees, so they could see their enemies. They didn’t want to lose all that taxpayer money they were getting for more testing. Many soldiers died from Agent Orange after they returned home to the US. Very few soldiers received any compensation for being exposed to Agent Orange either. Paybacks are hell and some of these people will reap what they sow because of these “experiments”! It’s called KARMA! I don’t really believe that God Almighty meant for animals to be tested in this way. Somewhere along the line these people have lost their conscience and compassion for animals — a/k/a Animal Cruelty! I wouldn’t want to be walking in their shoes. . .?

Animal testing is a barbaric form of abuse. I do NOT want my tax dollars going towards such deplorable acts. Please pass the FACT act. Humanity benefits ALL
1