UPDATE (1/26/18): The FDA announced it is permanently ending its nicotine addiction experiment and sending dozens of monkeys involved in the study to a sanctuary. Read more.

Our team recently came across a short description of an FDA laboratory that addicts baby monkeys to nicotine. Beyond that, it’s not listed on any federal research database it should be with more information on what it costs, its methods, or outcomes. 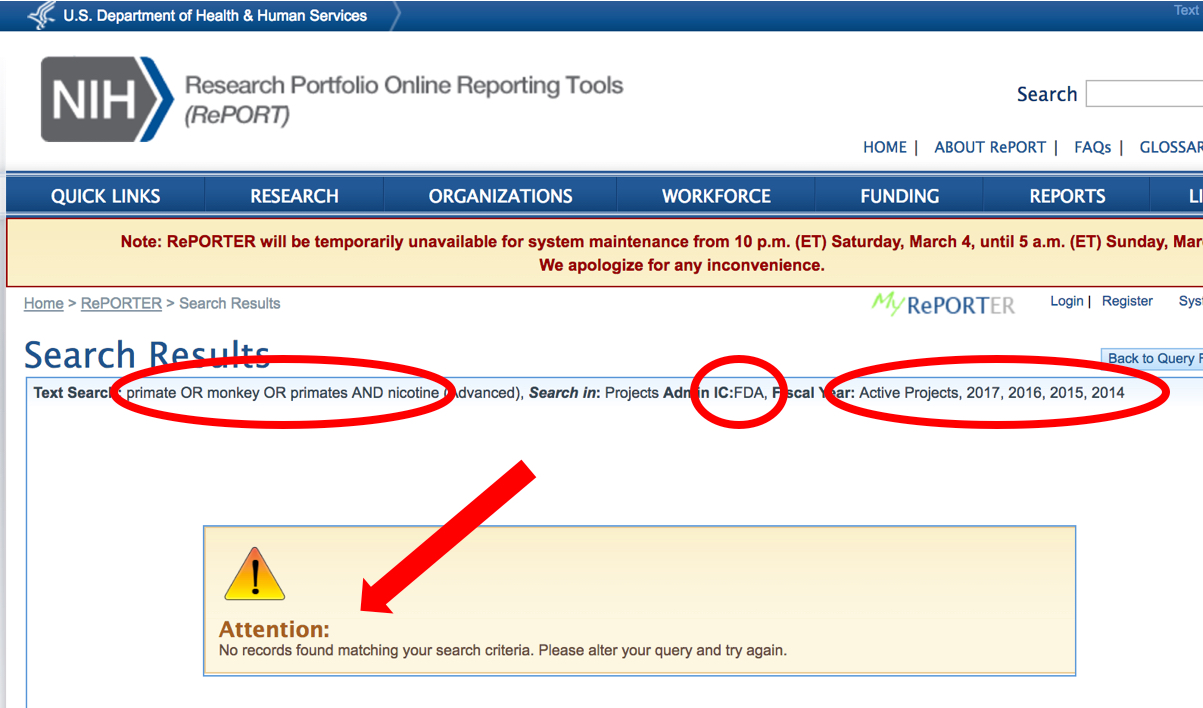 As reported in an exclusive story broken by Rare:

Because the only publicly available information about the “Aspects of Nicotine Self-Administration in a Nonhuman Primate” study is a mere paragraph on the FDA’s website, WCWP filed a Freedom of Information Act (FOIA) request back in December asking for related documents. In its response, however, the FDA supplied WCWP with a 64-page document containing redactions of the project’s cost and completely withheld other related documents — including veterinary records for the primates used, photographs and videos of the experiments, and adverse animal welfare event reports — without explanation.

FDA failed to provide most of the documents we requested. But, from the limited materials it did send WCW, we now know that FDA is addicting two dozen squirrel monkeys as young as 1 year old to nicotine to determine what dose gets them addicted.  For the experiments:

Here’s a sanitized schematic of the cruel experimental set-up from the FDA documents: 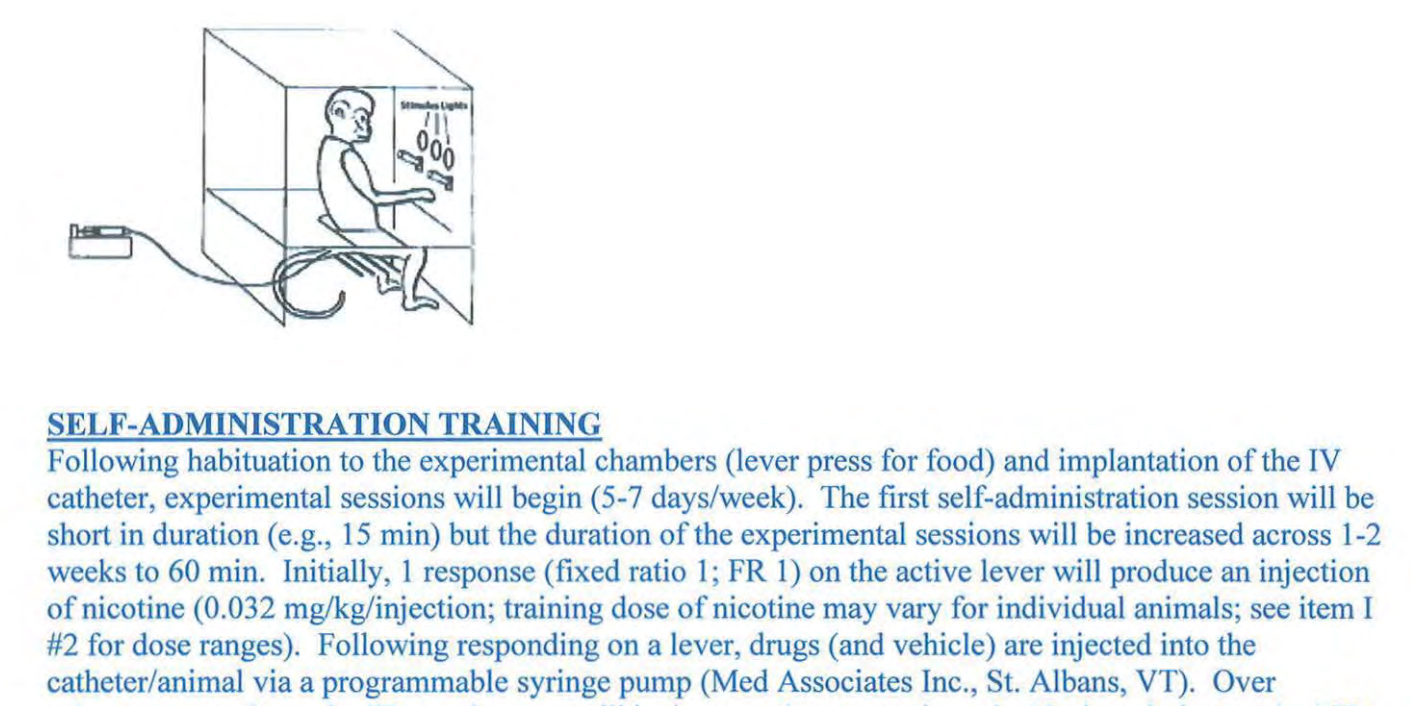 All of FDA’s redactions and document withholdings constitute violations of federal FOIA laws, and our legal team is now challenging this by appealing the FDA’s open records failure.

This is a prime example of why the forthcoming federal audit of government animal experiments that we’ve secured is so badly needed. In the meantime, send an email to FDA officials urging them to release documents about their nicotine addiction experiments on baby monkeys.

Stupid people!! Why use animals????

This is just wrong. This needs to stop. We do not want to continue to spend tax payers money this way

No more of this! It is just wrong, stop spending tax payer money on this!

Their best day is when they’re killed after the 138 weeks of torture. Do they kill them slowly too?

Transparency is essential in all animal related activities because the potential for abuse and exploitation is so high. I you’re hiding something, you have something to hide.

stop it. just stop. we all know nicotine is addictive. seriously.

We already know that Nicotine is harmful and addictive. Why are you wasting our money and torturing innocent monkeys?

You need to stop needless experiments. What a waste of money and you should never experiment on animals. They are not humans, tests re d ults are not valid. It’s unethical too.

we all know smoking is bad for you so why continue with this torture of innocent beings? It can only be to keep employing people who otherwise wouldn’t have a job SHAMEFUL

Stop tests on animals. If humans derive the benefit, then test on humans.

Baby animals don’t deserve this torturous life – no new information is gathered from this abuse. Retire them to sanctuaries Now!

Stop the insanity w these helpless animals. Smoke it yourself and I hope you burn in hell!

Stop the insanity! Smoke it yourself and leave these poor animals alone. I hope you burn in hell!

We already know that nicotine is harmful. If people are stupid enough to keep using it then let them! But keep innocent animals out of it!

Abuse of animals is not scientific research

This is cruel and should stop.

This is cruel and needs to stop.

This is inhuman. Animal cruelty. Karma is a great thing. Think about it before u abuse another being.

This needs to stop, it is so cruel and barbaric! We are supposed to be a civilized race but we are very far from it, disgusting!

Stop the torture! Set them free!

Immediately release these victims to appropriate sanctuary and STOP THESE STUPID MONEY-Squandering exercises. I am confident yourvresearchbdepartmebt can secure significant funds for constructive research – how about cold laser as an inflammation cure????!!!

This is worse than BARBARIC! It is the ultimate of TORTURE! It breaks my heart in a million pieces knowing the immense PAIN and SUFFERING these HELPLESS, TERRIFIED animals are FORCED to endure! This needs to STOP and it needs to stop NOW! ALL these precious animals should be sent to a sanctuary where they will be LOVED and cared for! They deserve that and so much more! SHAME on the nasty humans who think nothing of forcing such TORTURE upon these precious animals!!! SHAME SHAME SHAME!!!

Absolutely primitive and disgusting! We are not testing for a cure. Barbaric!

I am appalled that the use of infant monkeys are determining the outcomes of your studies of nicotine. This is cruel and inhumane and I do not give permission for my tax dollars to support this. Stop cruel experiments!

Unethical. I do NOT want my tax dollars to go to this.

This is a shameful waste thought up by “educated scientists” (doubtful) to spend more taxpayers money. But more importantly to cause great pain and suffering on infant primates who can think and reason very closely to a human. What gives you the right to carry out tests that cause grievous pain and suffering. This is disgusting.
.