Thanks to a generous in-kind ad grant from the PVBLIC Foundation, to coincide with tax week, White Coat Waste Project (WCW) has launched a national ad campaign calling on the Department of Veterans Affairs (VA) to stop forcing Americans to pay for its cruel and wasteful heart attack studies and other experiments on dogs.

As reported in the Cleveland Plain Dealer and the Washington Examiner, the first ad in the series went up this morning–a billboard in Cleveland, Ohio near the Stokes Veterans Affairs Medical Center (VAMC). Stokes is one of only four VA facilities in the U.S. still experimenting on dogs.

Polls show that 75 percent of voters want the government to phase-out cruel dog experiments, but Stokes VAMC has been ramping up the practice. Stokes has not experimented on dogs in recent years, but we’ve uncovered that’s now changed. 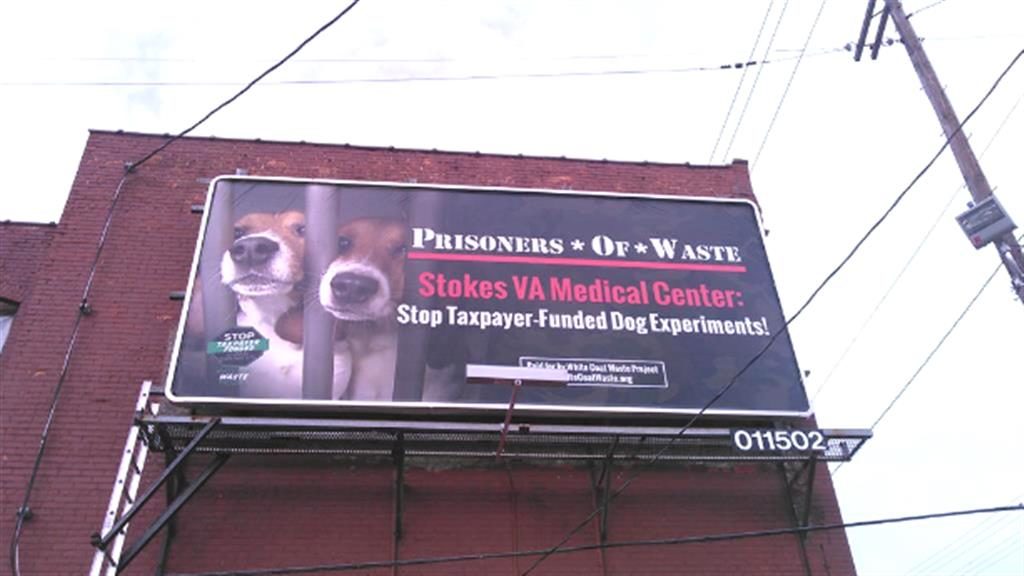 Government records analyzed by WCW show that over the past year, the facility has spent thousands of taxpayers’ dollars buying dogs to torment in experiments.  Recent VA purchases of mixed-breed dogs from laboratory suppliers show that your tax money was spent on:

As we’ve previously documented, it is difficult–even impossible, in some cases–for the taxpayers funding these experiments to find out what the VA is doing to dogs.

In the coming weeks, ads will go up in Milwaukee, Los Angeles, and near the Richmond VAMC where WCW has exposed rampant dog abuse, sloppy heart failure experiments and accountability failures that are now being investigated by the VA Inspector General.

This is 2017 and we are still allowing animal testing, what the hell is wrong with this society. These companies that use animals in testing there products should be boycotted by all. It needs to happen because it seems the only thing they can relate to is being hit in the pocket book.

Just like the Yulan Meat Festival in China, I can’t bear the thought of the astounding cruelty some human beings are capable of towards innocent dogs–“man’s & women’s best friends!” All people of conscience must stand up & be their voice.

Animal experiments do not help humans.

Please stop testing on animals, you know it’s wrong and painful to the animal.

Stop using dogs for your cruel experiments. There are other ways to go about it. You are just to lazy to do it!

This animal experiments are the most horrendous and barbaric, useless, waste of these precious animals lives and using our money to fund this. STOP THIS ABUSE YOU HEARTLESS WASTE OF HUMANITY!

God did not intend for animals to be used this way. There is no more loving animal than a dog.

Please stop cruel and unnecessary animal testing. This type of research is not justified.

I will do anything within my means to help this cause. Including adopting and helping you find homes for the dogs. I have been in animal rescue for 20 years +. I am a dog trainer and only keep unadoptable dogs. My last two dogs I received as adults and they were with me over ten yrs. Sparkle a Jack Russell, had brain damage. Houdini a dog fighting ring pit bull was the best friend I ever had. My dogs died of old age. For the first time since I was 12, I find myself without a dog. I want to help you. How do i join your organization? O.o if nothing else I can give you a website where you can find the dogs homes. Rescueme.org. This is an outstanding site. Love to you all!