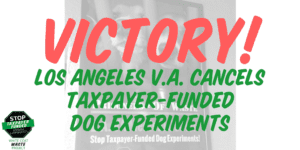 The announcement comes less than a day after a brave Iraq war veteran came forward to WCW with photos and other disturbing details about the Los Angeles VA’s dog lab, calling it a “house of horrors.” 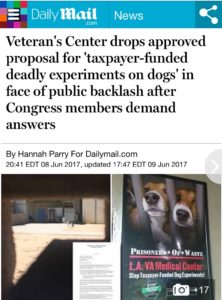 In the secretive Los Angeles V.A. project that began approximately 20 years ago and was not exposed until last month by WCW, countless Dobermans were bred to suffer from narcolepsy.  In a recently approved experiment discovered by WCW through the Freedom of Information Act, 24 more dogs were slated to be bred, injected with methamphetamines daily for six months, killed and dissected.

We’re proud of this victory for taxpayers, veterans and man’s best friend. This long overdue reform will help the Los Angeles V.A. get back to the business of caring for and housing our nation’s veterans, instead of wasting time, tax money and facilities operating a nightmarish dog laboratory and breeding colony. With Los Angeles closing down, only three V.A. facilities are still forcing taxpayers to foot the bill for heart attack experiments on puppies and other painful studies and White Coat Waste Project and it’s 400,000 liberty-loving and animal-loving supporters will continue to hold V.A. accountable until they stop. One down, three to go.

Let’s keep up the momentum from this historic victory! Email your congress members now and urge them to end all dog experiments at the V.A.

This is torture , sick, disgusting and horrific, what the hell is wrong with you people, you are monsters, STOP THIS NOW

I think that taxpayers should have a voice when it comes to having their hard earned money that taxes are taken from to do useless, barbaric and painful experiments on puppies!

I was just wondering if all these facilities & others like this – have they stopped the abuse on these poor animals ? Have they 💯 shutdown ?

I HOPE IT IS TRUE THAT THEY ARE NOT EXPERIMENTING ON DOGS AND NOT JUST CHANGED THEIR FACILITY TO AN UNKNOWN ONE.

STOP THE INSANE CRAP WITH THE DOGS OR ANY ANIMALS.

Help those that cannot speak for themselves

This is disgraceful and heartless. It needs to stop

Time for a more humane approach

Abhorrent despicable behavior by a human to inflict such anguish on the innocent. God is watching.

Karma plus a 1 way express ticket to Hell to ALL worthless scumbag human trash responsible for allowing and participating in the heinous horrific unjustified intentional cruelty plus murder of innocent life!!!!

This Very very Bad and I bet that just about all of those that are involved will say that they are dog / animal Lovers. Well I’m here to tell you that your not you cannot be otherwise you would STOP experimenting with all animals and join Our fight to Banish this ungodly act !!! Let’s say for a moment that the world was run by all of the Animals and they were using us humans for experiments, just a little something for you to think about !!

I hope this is ending and not being done in other locations!!!

This vile, heinous cruelty should be immediately stopped. No tax paying dollars should be used for this at all. Those who continue to perform these heinous, cruel,evil experiments need to have the program shut down and those who are complicit in anymore of these activities terminated from working with the US goverment, charged criminal, revocation of background clearances and permanently banned from working for the US government in any capacacity for the rest of their lives. This can include termnation of any pension or medical benefits prvovided by the government or government contractors.

I truly do not understand how you can live with yourself every day knowing how you are treating animals in such a barbaric way! You all are sick and demented!

“Dobermans were bred to suffer from narcolepsy. In a recently approved experiment discovered by WCW through the Freedom of Information Act, 24 more dogs were slated to be bred, injected with methamphetamines daily for six months, killed and dissected.”

Correct me if I’m wrong, but narcolepsy is not exactly a life-threatening condition, and certainly not on a par with the horrors of war. And amphetamines as a first-line medical treatment? Why, what could possibly go wrong with that?

The more I read about the VA, the more revolted I am. First the Walter Reed scandal, then the financial report revealing that they had spent more money on artsy-fartsy rock gardens than on actual medical care for our servicemen and servicewomen, and now this. Why bother even having VA medical facilities? Is there anything worthwhile they do for our heroes and heroines at all? They just seem to suck up tax money like a lamprey while kicking wounded warriors and animals alike to the curb. Screw them.

No wonder people are fed up with the government using taxpayer dollars to do whatever they want to do with. This is disgusting, barbaric,cruel and hundreds of other words I won’t say here. Stop this now. I do not want MY tax dollars associated with this thoughtless CRIME against nature. SHUT THIS PLACE DOWN AND ANY OTHERS LIKE IT. The VA has no business torturing puppies and dogs. This is ludicrous!

Please stop this unnecessary cruelty and abuse. They do not deserve this and should not be used like this, they should be loved and cared for!!!

TREAT VETS TERRIBLE, THIS IS EVEN WORSE, EVIL!! YOU PEOPLE WILL HAVE TO ANSWER TO GOD ONE DAY…

I make donations to a number of Veterans charities . . I will be researching to find out their positions on experimenting on dogs and other animals . . . I will discontinue donations for the charities that approve of this. How horrible, cruel . . . heartless!