WCW sues the VA for withholding information on dog experiments

White Coat Waste Project has filed a lawsuit against the McGuire Veterans Affairs Medical Center (VAMC) in Richmond, Virginia for unlawfully withholding critical information related to its deadly and wasteful experiments on puppies, which have been widely criticized by Congress and taxpayers. The story first broke in The Daily Caller.

In January 2017, WCW requested information from the McGuire VAMC through the Freedom of Information Act (FOIA) regarding their use of dogs in cruel experiments that have consistently violated federal animal welfare laws. The VAMC responded in March 2017 by providing documents with details about the facility’s use of puppies in four painful forced heart attack experiments and other deadly cardiac-related studies.

However, the VA unjustifiably redacted certain crucial information from the documents about these wasteful and abusive experiments, including:

We’re suing the Department of Veterans Affairs because taxpayers have a right to know who’s paying the bills, who’s cashing the checks and who’s responsible for abusing puppies in wasteful heart attack experiments at the McGuire Veterans Affairs Medical Center 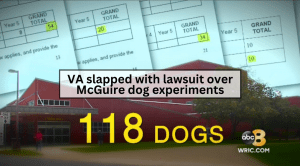 Stop experimenting on animals, including dogs.

This needs to be investigated and and those persons responsible should be held accountable for their actions, including any animal cruelty criminal charges. I do not want my tax dollars paying for any animal experimentation!!

I have two beagles & can not imagine anyone experimenting on them; the idea makes me sick. All animal testing needs to stop!

These dogs need our help to end this. My dog is my daughter and she is a big part of our family. This is beyond cruel. Evil thrives when good men and women do nothing. Thank you for doing something to end this great evil. This must and will end by His Hands.

PLEASE PLEASE STOP THE EXPERIMENTS ON THESE PRECIOUS PRECIOUS ANGELS. MY BABIES ARE MY FAMILY AND NO ONE HAS THE RIGHT TO USE THEM IN THIS KIND OF WAY