WCW Exposé: Cosmetics Testing on Animals With Your Tax Dollars

Animal testing by cosmetics companies is becoming a thing of the past, but did you know that the federal government is still secretively forcing you to pay for cruel, ineffective and expensive cosmetics tests on animals? 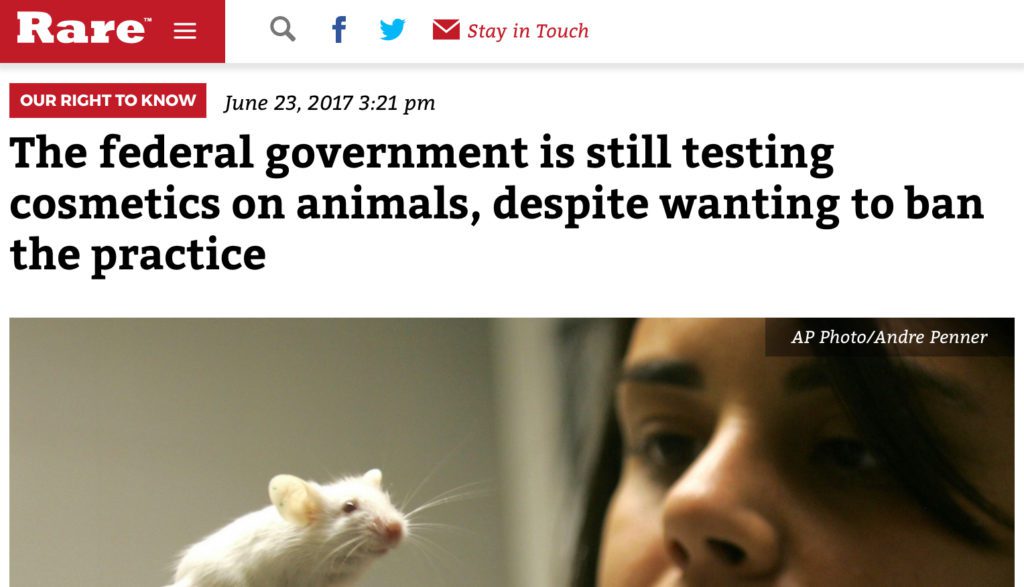 A new White Coat Waste Project analysis of more than 100 chemicals, foods, herbal supplements and other substances being tested on animals (or soon to be) by the federal National Toxicology Program found that cosmetics and their ingredients are among the compounds on the list that are each undergoing numerous animal tests.

In 30 ongoing and planned tests by NTP, massive doses of natural fragrances and colorings used in cosmetics and personal care products are being forced down animals’ throats or smeared onto their bare skin. Recently, a hair dye ingredient and cedar oil fragrance were also used for painful and deadly animal tests.

…it seems cosmetic companies in the United States have already stopped testing their products on animals anyway. The federal government, however, has not.

In their recent research, WCWP uncovered that the national government is currently using taxpayer money to conduct animal tests on cosmetics — making it the only entity in the country that still does so.

Not only are they arguably inhumane, but some of these individual experiments can take three to five years to complete, use more than 800 animals and cost taxpayers as much as $4 million. However, it’s possible that those numbers could be even higher, as it’s difficult to determine exactly how many animals are used and how much money is spent because the federal government currently does not disclose that information in its entirety.

New federal legislation has been proposed to ban cosmetics testing on animals and the sale of cosmetics tested on animals.  But, as Rare writes, cutting wasteful government spending could make an immediate dent in the problem:

before passing a bill that would place unnecessary regulations on cosmetic companies that have already chosen to end the practice of animal testing, WCWP suggests that the government take a look at its own practices first.

WCW is working with Congress to cut wasteful spending on these unnecessary cosmetics tests on animals. We’re also supporting the bipartisan Federal Accountability in Chemical Testing (FACT) Act to improve public disclosure about animal tests in government laboratories.  If you haven’t yet, please write your Congress members and urge them to support the FACT Act.

Please stop spending taxpayers money or any other money on these cruel and useless tests on animals.

This is cruel, inhumane, abustle, unnecessary, ineffective and wasteful. We are working hard and having success getting corporations to stop this archaic and cruel practice only to find that our government is perpetuating this torturous action. It must stop.

There is no reason except perpetuating money flowing to bogus research to be experimenting on animals! The results are rarely transferable to human beings and the research has been done over and over again! Stop!

This is outrageous. Stop torturing these poor beings already. Consumers want products that are NOT tested on animals – Not cruelly developed.

There’s no doubt about it, dogs are a man’s best friend. Let’s show our loyalty to them as they do to us.

Anyone who hurts, injures or kills animals should be prosecuted to the fullest and rot in prison!

Stop testing and torture! It is so unecessary and archaic. Be responsible and humane!

Animals are not machines! Stop these cruel experiments!

Ahhhhh yes, our government, so full of ethics. Such good good people!! And the character! My goodness! Have you ever seen people with so much love for sentient beings all over the world? It just gives me the warm fuzzies all over. I love that they take the responsibility of sharing this planet with other sentient beings so seriously. The way they are so incredibly careful not to harm others (human and nonhuman). I am really almost in tears here typing this. Great role models for all of us! I am so proud! In fact, they are so loving and compassionate that it wouldn’t surprise me if one day soon they all decided to take the places of all these nonhuman animals they torture daily in evil experiments and tests. I mean, that is, after all, how incredibly selfless and caring they all are, right?

STOP there is not a point to do it