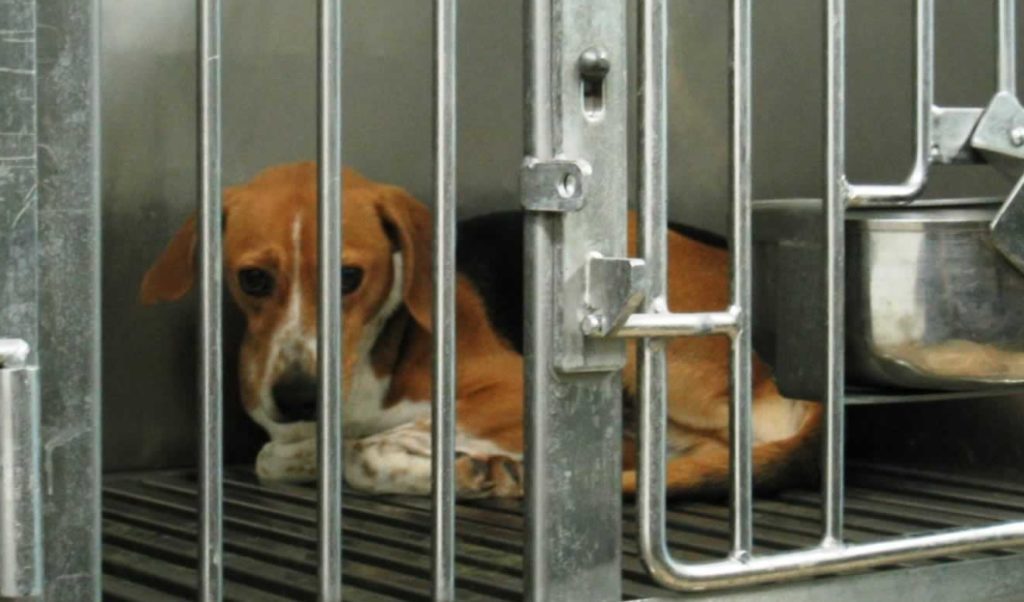 You may recall that in March, White Coat Waste Project filed a complaint with the Department of Veterans Affairs (VA) Inspector General to report waste and abuse in dog experimentation laboratories at the McGuire VA Medical Center (VAMC) in Richmond, Virginia.  The VA has just completed its investigation and the situation for dogs at McGuire is much worse than anyone knew. Richmond-area Congressman Dave Brat (R-VA) told WRIC,

The reports I read about were almost on the scale of torture….I think there are probably alternative paths that will lead to the same breakthroughs

In its 42-page internal report leaked to WCW, the VA substantiated WCW’s main allegations about the mistreatment of puppies in painful heart attack studies and related dog experiments during 2015 and 2016.

Additionally, as first reported in The Daily Caller, during its WCW-prompted April 2017 visit to McGuire’s dog labs, VA’s Office of Research Oversight discovered widespread, ongoing waste and abuse that the facility had failed to identify. In its own words, the VA found:

Watch a clip from Richmond’s ABC affiliate WRIC below:

Taxpayers should not be forced to pay for wasteful and abusive experiments in government animal laboratories.  Urge Congress to cut funding for dog experiments at the VA.

Stop this abomination. These dogs do not deserve the abuse you are heaping on them. Use your time and resources to do things that actually help veterans and STOP ABUSING ANIMALS

Stop this horrible thing!!!!leave out animals alone do it!!!!!!

Stop all experiments on animals.

Stop animal testing and hold the greedy who are torturing animals like these accountable with fines and sentencing.

Stop this horrific, needless and wasteful torture IMMEDIATELY! We no longer live in the middle ages…there are many other options that can be used. And grow a conscience.

THIS IS EVIL! THE GOVERNMENTS THAT ALLOW THIS ARE EVIL PERSONIFIED ?

WAY TOO MANY GRANTS FUND THIS CRUEL AND FUTILE ACADEMIC SCAM. THIS IS ONE VILE WAY UNIVERSITIES GET THEIR MONIES. AND THE PEOPLE WHO DO THIS ARE MANY OF THE PSYCOPATHIC NATURE. THEY CANNOT BE SENSITIVE OR SENTIMENTAL. THEY ARE NOT ALLOWED INTO THE RING OF ABUSE IF THEY ARE NOT COLD, HARD, INSENSITIVE AND EVEN SADISTIC.

Humans do not DESERVE the company of dogs

This is beyond cruel, it is barbaric. How were they able to justify this level of insanity and inhumane behavior to anyone, let alone for this amount of time? These poor dogs, cats, pigs and all other animals who now think all humans are sadistic. They deserve to know kindness and love. How do the experimenters look in the mirror everyday with a clear conscience, or do they have any level of decency? This must and will end by His Hands.

How can this be allowed?

Ban this experiment on the dogs, cats and small animals right now. They are so innocent animals a lot and have them to go free right now… STOP ANIMAL ABUSE and CRUELTY…!!!!

Stop cruelty. ..this is evil

Free these animals and lock up the sadistic SOB’s who torture them. Outlaw the practice entirely. I am so mad I can’t even speak. Tear the damn building down. Call it what it is and make animal abuse a class 1 felony