WCW is working with countless veterans and active duty service members who are supporting the PUPPERS Act and the associated campaign to cut wasteful taxpayer spending for the most painful dog experiments at the Department of Veterans Affairs (VA). These American heroes are frustrated that the VA is squandering scarce resources on needless dog experiments but can’t provide them with basic medical care and refuses to provide those suffering from PTSD with life-saving service dogs. Now, polling shows that they represent the majority of veterans and their families who want Congress to take action. 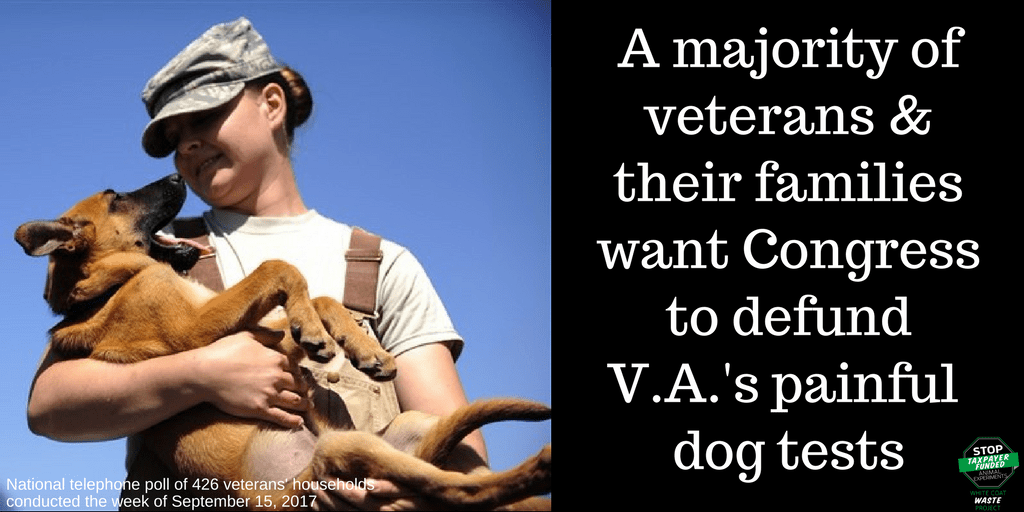 In a national telephone survey conducted the week of September 15, 2017 by research firm PulsePoint, 426 veterans and their immediate family members were asked: Do you support legislation to prohibit taxpayer funding of the most painful categories of dog experiments at the VA?

A majority of respondents–56 percent–said they support this legislation. Only 20 percent said they did not, and 24 percent were undecided.

The veterans were also asked: Do you support efforts to ensure that, whenever possible, healthy dogs are adopted out from VA laboratories when they are no longer needed for research?

In this case, a staggering 71 percent responded favorably. Only 6 percent opposed.

If you haven’t yet, write your Congress members and urge them to support the bipartisan PUPPERS Act to end taxpayer funding for the most painful dog experiments at the VA.

These animals are our friends in war and peace.

[…] The American Military Retirees Association and The Retired Enlisted Association. In a national survey conducted in September by the research firm PulsePoint, 56% of veterans and their immediate family […]