As pressure from veterans, Congress members, and taxpayers mounts on the Department of Veterans Affairs (VA) to end its wasteful and most painful dog experiments, a national cover story in USA Today examines our campaign to expose and defund this abuse. The article by renowned VA reporter Donovan Slack—who has broken some of the VA’s biggest scandals—is appropriately titled, “The VA Conducts Gruesome Experiments on Dogs, Then Kills Them. Investigation Draws Outrage.” 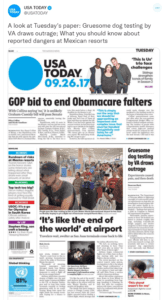 Read the story below, and then write your Congress members and urge them to support the bipartisan PUPPERS Act to end taxpayer funding for the most painful dog experiments at the VA.

The VA Conducts Gruesome Experiments on Dogs, Then Kills Them. Investigation Draws Outrage.

WASHINGTON — The Department of Veterans Affairs is tightening oversight of controversial medical experiments on dogs after an investigation found surgery failures and canine deaths in research projects at a VA facility in Virginia — findings that spurred a push in Congress to defund the experiments altogether.

Nationwide, invasive experiments at three VA facilities are slated to include roughly 300 dogs, including 6-month-old Beagle puppies, and involve surgeries on their brains, spines and hearts by researchers seeking treatments for heart disease and other ailments. All the dogs will be killed when the research is complete.

“VA programs that have dog research as a component will now be visited more frequently by our accrediting body,” Fallon said.

The moves follow an investigation by the VA’s Office of Research Oversight, which found in May that researchers at the VA facility in Richmond, Va., failed to adequately document whether dogs had been treated properly. Four dogs suffered complications in experimental surgeries.

Those findings helped fuel an effort on Capitol Hill to halt VA dog experiments deemed painful for the dogs. The House quietly passed legislation in July eliminating funding for such research, and now the VA is pushing back and tapping veterans groups to help persuade senators not to pass the measure.

“If this legislation passes the Senate, it would stop potential VA canine research-related medical advancements that offer seriously disabled veterans the hope of a better future,” VA Secretary David Shulkin wrote in a USA TODAY op-ed this month.

He said VA research on dogs has led to important breakthroughs, including development of the implantable cardiac pacemaker and an artificial pancreas that automatically monitors glucose levels and delivers insulin for diabetics.

But opponents say those examples are decades old, and most such research hasn’t translated to humans. They contend the VA is relying on outdated models that don’t fully take into account scientific advances that may provide alternatives to dogs as research subjects.

“The VA is abusing its authority and fear-mongering to defend taxpayer-funded experiments on dogs that are cruel and unlikely to help veterans or anybody else,” said Justin Goodman, vice president of White Coat Waste Project, an advocacy group that wants to cut off money for the agency’s dog experiments.

He and others say researchers made the same arguments about chimpanzees until a federal study found that most experiments on chimps were unnecessary and the National Institutes of Health stopped funding research using chimpanzees in 2015.

Only three VA facilities are currently conducting the type of research that would be affected by the House-passed legislation — those studies that involve pain for the dogs, including when medications are administered to relieve it.

In Milwaukee, VA researchers looking for ways to decrease pain without slowing breathing are using dogs to study neurons that control breathing rates.

In those experiments, researchers place the dogs under anesthesia and remove parts of their brains to cause a complete loss of consciousness and sensation, according to research protocol documents. They then perform tests on neurons in the dogs’ brain stems before killing the dogs by lethal injection.

Although the study protocol says only adult dogs are to be used, documents show the Milwaukee VA acquired beagle puppies for the study, between 6 and 9 months old. VA officials told USA TODAY the “adult” description is being deleted from the protocol.

In Cleveland, VA researchers are studying ways to restore cough functions after spinal cord injury. The experiments involve placing dogs under anesthesia and then using electrodes for high-frequency stimulation at various places on their spinal cords to induce coughing. Researchers perform the tests before and after severing the spinal cords to mimic injuries suffered by humans.

The research calls for 41 dogs, who are euthanized at the end without recovering consciousness. Researchers on the project say previous similar dog studies helped them develop methods of electronic stimulation that have improved the breathing of quadriplegics who depend on ventilators.

At the Richmond VA, researchers are seeking therapies for heart disease and its development. In a handful of studies, they are implanting pacemakers in dogs, running them on treadmills and performing various tests, including by injecting medications, inducing irregular heartbeats, creating heart attacks and blocking arteries with latex. After the research is done, the dogs are euthanized by injection or by draining their blood.

The investigation of the Richmond cardiac experiments followed a complaint to the VA inspector general’s office in March.

Investigators concluded a dog received an overdose of anesthetic during one surgery but recovered, and two dogs suffered surgical disruptions of nerves controlling digestive functions that left them with “significant nausea, lethargy, anorexia and weight loss.” One later died from ventricular fibrillation and the other was euthanized during subsequent surgeries. A fourth dog died after a surgeon accidentally cut into one of its lungs during surgery.

The VA subsequently barred the researcher who did the surgeries from performing future operations and required a review and update of study protocols.

Dogs work best for these experiments because their heartbeat pacing system is more like humans’ than those in pigs or other large animals, Fallon said. Rodents’ hearts are too small, and previous experiments on dogs have left more established data for researchers to use, he said.

In addition, Fallon said “dogs are easy to train for the light treadmill activity needed for some of the studies and they enjoy it, in contrast to pigs and other large animals.”

But the issue has touched off a heated debate, given the push on Capitol Hill to eliminate funding for the VA dog experiments.

Opponents of animal testing are seizing on the opportunity to reduce the practice, if only a little, while supporters worry that curbing some practices now will eventually lead to a total ban.

Across the country some 60,000 dogs were used in research experiments in 2016. Buckmaster, a professor at Baylor College of Medicine, says that number is much lower than a few decades ago and has declined naturally as scientists have learned they can use different methods or other species to answer the same questions.

The public, Buckmaster said, is “being manipulated into feeling a certain way about things, because they have these horrible images in their mind that aren’t accurate reflections of what’s actually happening, and they’re being duped into robbing themselves and everyone they love, including their pets, of biological progress.”

Opponents at the White Coat Waste Project, whose campaign to expose VA dog experiments triggered the move to cut off money for the testing, say scientists will keep doing the research if left unchecked.

“The scientists can always find a reason to justify what they’re doing,” said Lawrence Hansen, an advisory board member for the group and professor of neuroscience and pathology at the University of California-San Diego School of Medicine. “It’s only people from outside who have managed to limit them at all.”