STAT: “He calls animal testing ‘taxpayer-funded torture.’ He got the FDA to listen” 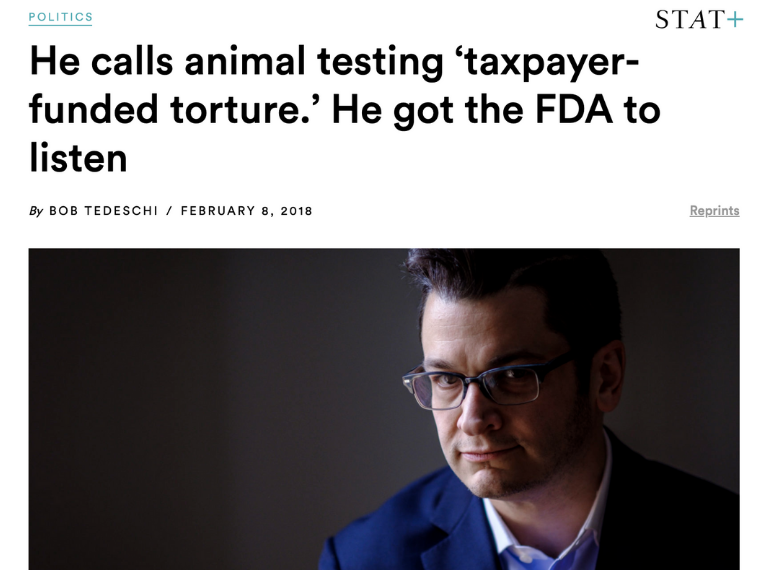 He calls animal testing ‘taxpayer-funded torture.’ He got the FDA to listen

In 1995, when Anthony Bellotti was 17 and slogging through a summer internship in an animal research lab, he was struck not by how the work could help the millions of people suffering from heart disease, but by the plight of the pigs being hoisted by their hind legs onto tables.

“They were always screaming,” he said. “I thought, ‘Something’s wrong with this picture.’”

He still hoped to one day join his father in the medical field, but the experience triggered a more lasting ambition: rolling back animal testing, which helped refine vaccines that saved millions from polio and smallpox, among others, as well as treatments for many other diseases.

Now the 39-year-old founder of an animal rights group, Bellotti last month achieved an important victory for opponents of animal testing. He played a key role in pressuring the Food and Drug Administration to shut down a nicotine-addiction study in which four monkeys died, and prompting the appointment of an independent investigator to look into the agency’s animal research program.

Emboldened by that success, Bellotti is redoubling fundraising efforts for his fledgling organization, and publicizing more government-backed medical tests that he believes taxpayers oppose. It is, he suggests, a wholly novel approach to animal-rights advocacy, since no one has previously sold this idea as a way to cut government waste.

“Animal experiments have been an issue since the Reconstruction,” he said. “We found a new way of looking at an old idea. We figured out the winning formula.”

While the FDA did not cite Bellotti or his organization, the White Coat Waste Project, in its suspension of the monkey nicotine tests, both supporters and detractors credit him with exposing what the FDA characterized as testing “deficiencies” that contributed to the monkey deaths.

The FDA’s program “may need to be strengthened in some important areas,” Scott Gottlieb, the agency’s commissioner, admitted in a statement announcing the measures.

To Bellotti, the program should be dismantled. He calls animal testing “morally dubious,” but claims his group “doesn’t want to ban anything at all.”

Except all taxpayer-funded animal experiments.

“Is there ever a case where [animal testing of drugs] will save a life? I’m sure it has, in occasional cases,” he said by phone last week. “But if it’s truly saving lives, let the private sector do it.”

Scientists say animal studies are essential because they allow researchers to identify safety problems before drugs are tested in people.

By targeting the public funding spigot, Bellotti has forged unlikely alliances in Washington, with left-leaning, Patagonia-clad “no blood on my hands” animal-rights activists locking arms with bowtie-and-blazer “drain the swamp” stalwarts of the right.

Even the alt-right. On the day Gottlieb issued his statement about the monkey trial, Bellotti appeared on the conspiracy-spinning website InfoWars.com to tell some of the site’s roughly 10 million visitors about VA-backed trials involving dogs.

“He’s an animal-rights extremist masquerading as a fiscal conservative,” said Cindy A. Buckmaster, a professor of molecular physiology and biophysics at the Baylor College of Medicine, and the chair of Americans for Medical Progress, which advocates for what it calls the responsible use of animals in medical experiments.

“It’s a dishonest gimmick and his position is no different from any animal rights group. He’s just landed on a tactic that fits very well in politics right now,” she added. “And he’s very, very good at knowing what people don’t know, and exploiting their ignorance.”

If Bellotti sounds like a political strategist when he speaks, his K Street cred is hard earned.

He followed his stint in the lab with four years studying philosophy and political science at the University of Pennsylvania, after getting some candid advice from his dentist father: You’re meant for things other than medicine.

“I didn’t want to hear that at first, but he was right,” Bellotti said.

Instead, he followed his Penn buddies in the chase for dot-com riches, going to work at Deutsche Bank. His goal: “Make a lot of money and fund the animal campaigns to fight back.”

“Even if I did have a moral problem with something, I couldn’t pick and choose” the projects his employers wanted to pursue, he said.

The efforts to de-fund Planned Parenthood and Obamacare led Bellotti to the idea of stripping funds from animal-based medical experimentation. Sitting on a beach in 2010 in the Turks and Caicos islands, Bellotti said he was reading a book about lab animals “when it hit me.”

“This is taxpayer funded. This is what I do for a living, and nobody’s talking about a supply-side approach to solving this.”

It helped tremendously that Bellotti started with the wind at his back: Public support for animal research has hit historic lows, a process that researchers say began in 1975 with the publication of the book “Animal Liberation,” by the Australian philosopher Peter Singer, and was catalyzed by protests against cosmetics companies that used animals to test their products.

As of last May, a Gallup poll showed that 44 percent of adults in the U.S. believe medical testing on animals is “morally wrong,” up from 26 percent in 2001. Bellotti started soliciting checks and networking — notably attending an early 2015 event where the pioneering primate researcher Jane Goodall spoke.

Bellotti joined the line of well-wishers following Goodall’s remarks, and asked her for her card. Fast forward to last year, when Bellotti emailed Goodall to enlist her support in pressuring the FDA and Congress to shut down the nicotine trials.

She eagerly took up the fight, writing in September to Gottlieb that the trials represented “taxpayer funded torture.”

“To continue performing nicotine experiments on monkeys when the results of smoking are well-known in humans — whose smoking habits can still be studied directly — is shameful,” she wrote.

The agency suspended the trial that month, and launched the investigation that ended in January.

Buckmaster, of Baylor, criticized Gottlieb for backing down, when the monkey experiment could have yielded important discoveries about the molecular underpinnings of addiction.

And since the vast majority of medical research in the U.S. is funded by the National Institutes of Health, she said, the implications of Bellotti’s early successes are especially disturbing. In the past, animal rights organizations threatened individuals, as in the 1980s when an activist was arrested while plotting to bomb the headquarters of United States Surgical Corp., a medical device company that used dogs to train surgeons who were using the company’s surgical stapler.

“This is actually a lot more dangerous,” Buckmaster said. “It’s dangerous to the entire public.”

Meanwhile, Bellotti is celebrating and moving onto the next target: shutting down more VA trials involving dogs.

On the day of the FDA’s announcement, after appearing on InfoWars, Bellotti celebrated not with a champagne toast, but with a trip to a local art studio for date night with his girlfriend. Their activity: painting a portrait of her cat, Nino.