Following a free speech lawsuit filed by White Coat Waste Project in October 2018, the Maryland Transit Administration has agreed to run WCW’s ads on buses and trains criticizing the U.S. Department of Agriculture’s wasteful and deadly kitten experiments. The WCW ads, which the MTA originally denied in apparent violation of the First Amendment, will run in early 2019.

Ads protesting experimental testing on kittens by the Agriculture Department will soon appear on buses and trains in Maryland thanks to a settlement between a taxpayer watchdog group and the state. https://t.co/iATzrDd5iR @BBuchman_CNS pic.twitter.com/MlTSUsVXMV

Now, as first reported by WJLA in Washington, D.C., WCW is suing the agencies in U.S. District Court for censoring the ads in violation of WCW’s free speech rights. 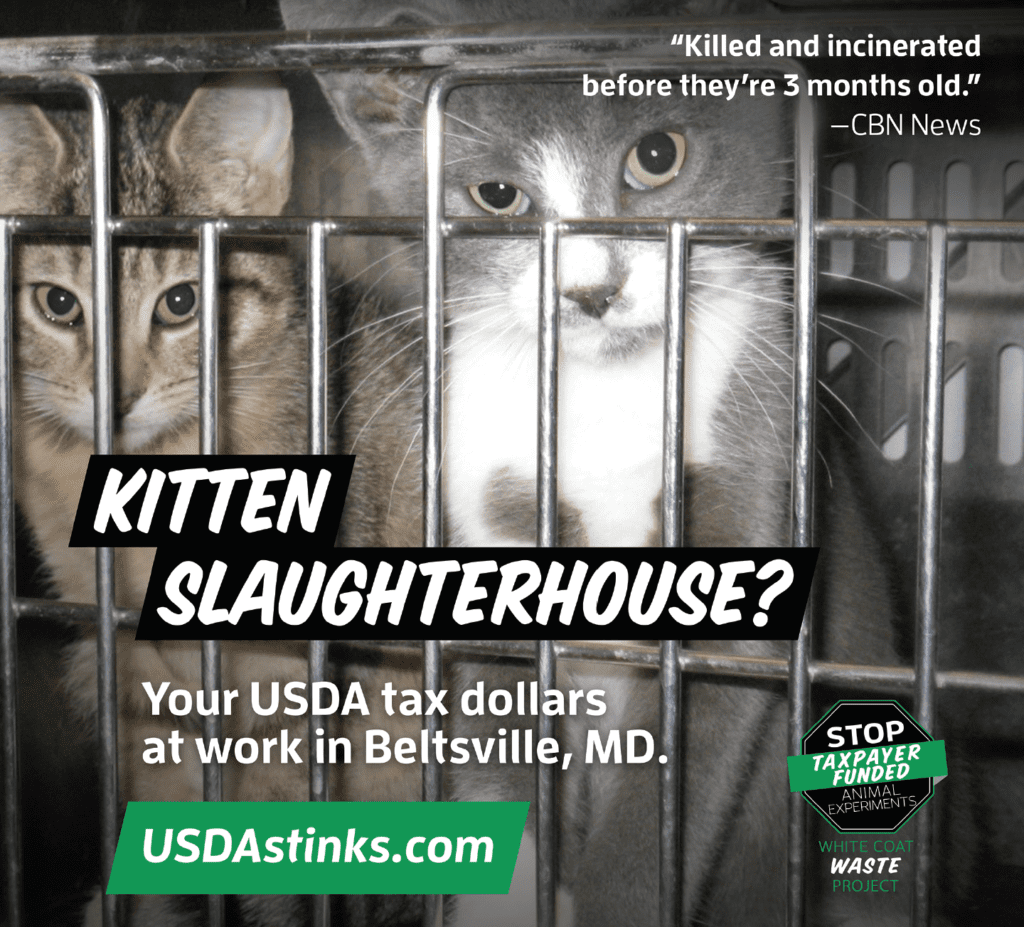 The lawsuit alleges that the Maryland Department of Transportation, Maryland Transportation Administration and the Regional Transportation Agency of Central Maryland are violating the first and fourteenth amendments by arbitrarily refusing WCW’s public education ads in the absence of any formal policy prohibiting the content, or other reasonable, legally-sound justification. WCW is represented in the lawsuit by the Law Office of Matthew Strugar.

I-TEAM EXCLUSIVE: Lawsuit just filed against Maryland Dept. of Transportation & RTA by @WhiteCoatWaste who are being denied placement of this ad on buses & trains protesting killing of healthy kittens @USDA lab. My story at 5pm on @ABC7News #7OYS #KittenAct2018 pic.twitter.com/OF7dHaVlWr

This is just the most recent WCW effort to push back against government secrecy and overreach. Last month, WCW filed a lawsuit against the USDA for refusing to provide documents related to its kitten experiments.

Tell Congress to pass the bipartisan KITTEN Act to defund these deadly taxpayer-funded experiments and urge USDA to adopt out the cats!

Please stop the cruelty to kittens. Release them to good homes.

If you have money and power it is unbelievable who and what you can stop/silence. These people clearly have NO conscience. I dint know how they sleep at night. Shame on them

Please stop the experiments on kittens. ALL ANIMALS can feel pain and they have a right to a good life just as you do. Please stop this and let them go to homes that will love and care for them.

They are bringing them from the truck loads from Florida..they will call up rescues and ask If they have any kittens as well as the shelters. Sick people!

These kittens must be let go and be able to eat adopted out to loving homes. This is assanin. Kittens and cats have rights too. I’m also one that would love to have a couple of kittens myself. There are lots of people who want kittens too. Please let them be adopted out. Your finished with them and do the right thing and adopted out. STOP completely experiments on kittens and all animals. This is a terrible heinous crime your commenting to these defense animals. This is heartbreaking to me you would do something like this to kittens.

STOP DOING THIS TO INNOCENT BABY ANIMALS YOU FUCKIN IDIOTS! YOU ARE BAD PEOPLE EVER TO DO TO THIS CUTE ANIMALS. YOU SHOULD BE SHOT AND KILLED BY THE PEOPLE!

Woah, Joseph! I’m on your side, but threatening and personally attacking these people just gives them traction to ignore us. Do the research, argue effectively, volunteer, and donate, if you can, to help fund lawsuits. Hurling expletives and threatening violence is their schtick, not ours.

This is just horrible. These kittens should be able to live the good life. The bastards that allow this are animal haters.

These kitten’s deserve a chance to grow up and be loved.

Stop this inhumane treatment of kittens and all animals!!

As a Canadian, all I can do is leave an opinion and hope that it has some influence to help stop this most inhumane practice.

I will take a couple.. maybe if enough people step up and take one or two, we can be heard. please adopt them out and then do NOT NOT NOT get more!! practice on yourselves and then set yourselves on fire.

It’s never too late to do the right thing. That time is now. You have done enough killing with tax payers’ money. You have stolen the lives of countless little creatures. So wrong, so sad, so unnecessary.

Let them go! This is disgusting and horrible. I’m tired of my tax paying dollars going to harm animals! These kittens are living, breathing, have heart beats, eat, drink, have feelings just like us and this is not fair to do! Let them go!!!!!!! We need to change the laws also! Cause the law says animals are considered property and no animals are not property ! Their our family! We need to change that law so these precious animals are protected! This has to STOP! It’s time to let these kittens be adopted and loved like they should have been in the first place. Anyone who harms a animal should be ashamed of themselves! Let them go!

This is NOT condoned by the public whose tax dollars are paying for this. I bet the majority don’t even know this is going on. We have to spread the word and have a public outcry against this.

We must be in end days (& I’m not even religious!). Setting bulls’ horns on fire for entertainment, drenching dogs in tar, shipping horses hunched over in cattle cars for days for slaughter in other countries, the atrocities committed against so-called lab animals & so-called food animals. No normal person could think up this shit, let alone carry it out.

Uhhhh someone CONDONES killing innocent KITTENS?!? What devil supports it?!? No human would ever allow that.

Cruel and inhumane treatment of any living creature should be punishable to a much higher degree under the law. We the people should also be allowed to thwart any spending of our tax dollars to fund murder and animal cruelty.This practice is just plain wrong on every level.

Please quit being the monsters and barbarians you are. Live and let Live and have these kittens released to adoptive families who will love them forever.

According to the Humane Society of the United States, a study by the Chicago Police Department revealed that between the years 2001-2004, 65 percent of people arrested for animal cruelty had also been arrested for violence against other humans.

FYI I live in Brevard, Florida the Sheriffs are in charge of the humane society here. They call around to all the cat rescues and ask If they have any kittens (They say no) and drive all the kittens they can load in their van and continually drive them to to Maryland..now I know why!

I wonder if any of these experimenters have pets. If they do, how can they interact with them, seeing how these pets respond to love and affection and return it. What are they thinking. Have they become so desensitized that they don’t compare their pets to the ones they are killing, either by unnecessary testing or incineration? There has to be retribution for these acts.