Lara Trump’s new cause: Stop experiments on dogs at the VA https://t.co/ATyBM4ieeb pic.twitter.com/NKKgbGx5K2

Dogs locked in taxpayer-funded government testing labs have it rough, but thankfully they have friends in high places speaking up for them. President Donald Trump’s daughter-in-law Lara Trump–a passionate advocate for the welfare of veterans and dogs–is lending her voice to the campaign to pass the PUPPERS Act and stop wasteful and cruel dog experiments at the U.S. Department of Veterans Affairs.

In a USA Today interview about White Coat Waste Project’s work with Congress to stop this waste and abuse, Mrs. Trump–who shares her home with two rescued beagles, Charlie and Ben–said: 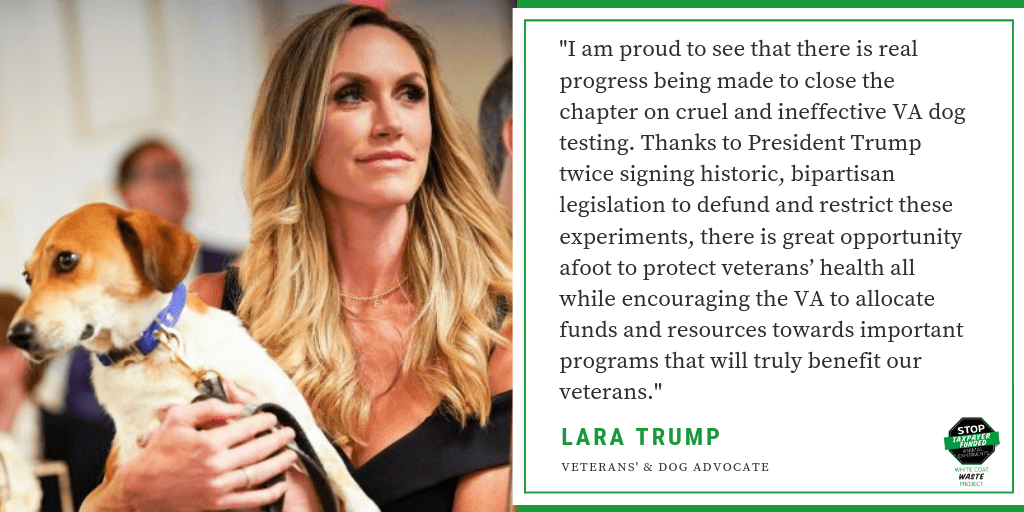 Lawmakers leading the charge on the PUPPERS Act applauded Mrs. Trump for her advocacy:

Technology evolves faster than government processes, and we have neglected technologies that would give us testing information so we can continue painful animal testing, and that’s silly.

Thank you for your leadership on this @LaraLeaTrump!https://t.co/AI8usY0rZM

Thank you @LaraLeaTrump for supporting our work to prevent painful – and sometimes deadly – experimentation on dogs at the VA! Together, we can put an end to this abuse of animals and taxpayer dollars! https://t.co/ZnPpNmFVGy

Join Mrs. Trump and urge your Congress members to cosponsor the bipartisan PUPPERS Act to permanently cut federal funding for all painful dog experiments at the VA.

Congress -Cut federal funding for all dog experiments at the VA

Wonderful news! Many thanks to Lara Trump, Reps. Gaetz and Mast and everyone responsible. Now, please stop all of this unconscionable torture and stop it at all government agencies and universities.

LaraTrump…I just want to say how grateful i am to read that you are a part of ending theses hortible VA dog experiments.I have prayed for so long that these cruel places would be closed down. Infact. I just prayed again this morning anout it. God answers prayers for pets who are suffering. Thank you. Lara for caring. I pray that everyone of these labs will be closed down. God Bless You.

These wonderful & innocent beings are also SENTIENT BEINGS! Feelings, emotions, all of the hurt, pain, love & MOSTLY love with no strings. It has always been at the forefront of the saddest moments in life, anger comes too. How in the world anyone can do these horrid things is inexcusable. I hope this will stop for everyone’s sake…KARMA

HAPPY TO HEAR THAT THEY ARE ENDING PUPPY TESTING.

This is animals abuse 200 percent !