Just when you thought the U.S. Department of Agriculture’s (USDA) “kitten slaughterhouse” couldn’t be any more wasteful and abusive, we just dropped this bombshell: 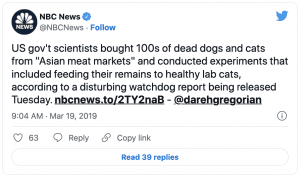 As first reported by NBC News, and covered by the Washington Post, Newsweek, Time and scores of other outlets, a new report released by White Coat Waste Project found that the USDA has been using our tax dollars to buy live cats and dogs from meat markets in China, as well as round up stray animals and pets in other foreign countries, kill them, and feed their remains to kittens at the USDA’s lab in Beltsville, Maryland. The report also documents in detail how the USDA’s expensive kitten experiments are outdated, wasteful, and unnecessary, and how the USDA has made false claims to Congress and the media. 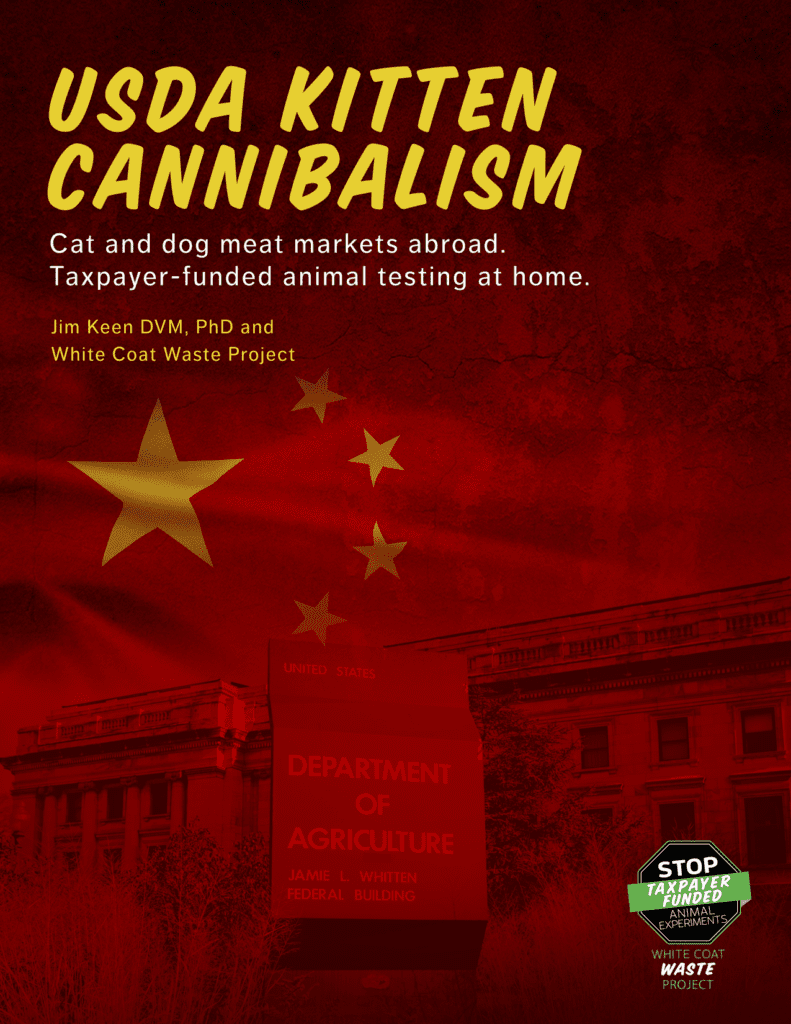 Some of the USDA’s horrific experiments using cats and dogs procured abroad include:

34 cats were purchased at a meat market in China, killed, and their tongues, brains, and hearts were fed to cats at the USDA

42 cats were purchased at markets and farms in China, killed, and their hearts and tongues were fed to mice at the USDA

42 dogs destined for meat markets in Vietnam were purchased, killed and their hearts, brains and tongues were fed to cats at the USDA

120 unclaimed shelter dogs in Brazil were killed and their tongues, brains and hearts were fed to cats at the USDA

The report, USDA Kitten Cannibalism, was co-authored by Dr. Jim Keen, a former USDA veterinarian and researcher who blew the whistle on waste and abuse he witnessed in the agency’s research program.

Ironically, the USDA acquired cats and dogs from markets in some of the same countries that U.S. Congress unanimously condemned last year for their dog and cat meat trades “on cruelty and public health grounds,” stating that these facilities “would breach anti-cruelty laws in the United States.”  Yet, USDA has been using Americans’ tax dollars to subsidize this despicable industry and help it stay afloat.

USDA also claimed in writing that for the experiments on cats obtained in China, “the cats were killed humanely according to [China’s] laws for the slaughtering of food animal (sic).” This is deceptive: China does not have any national laws protecting animals slaughtered for food. 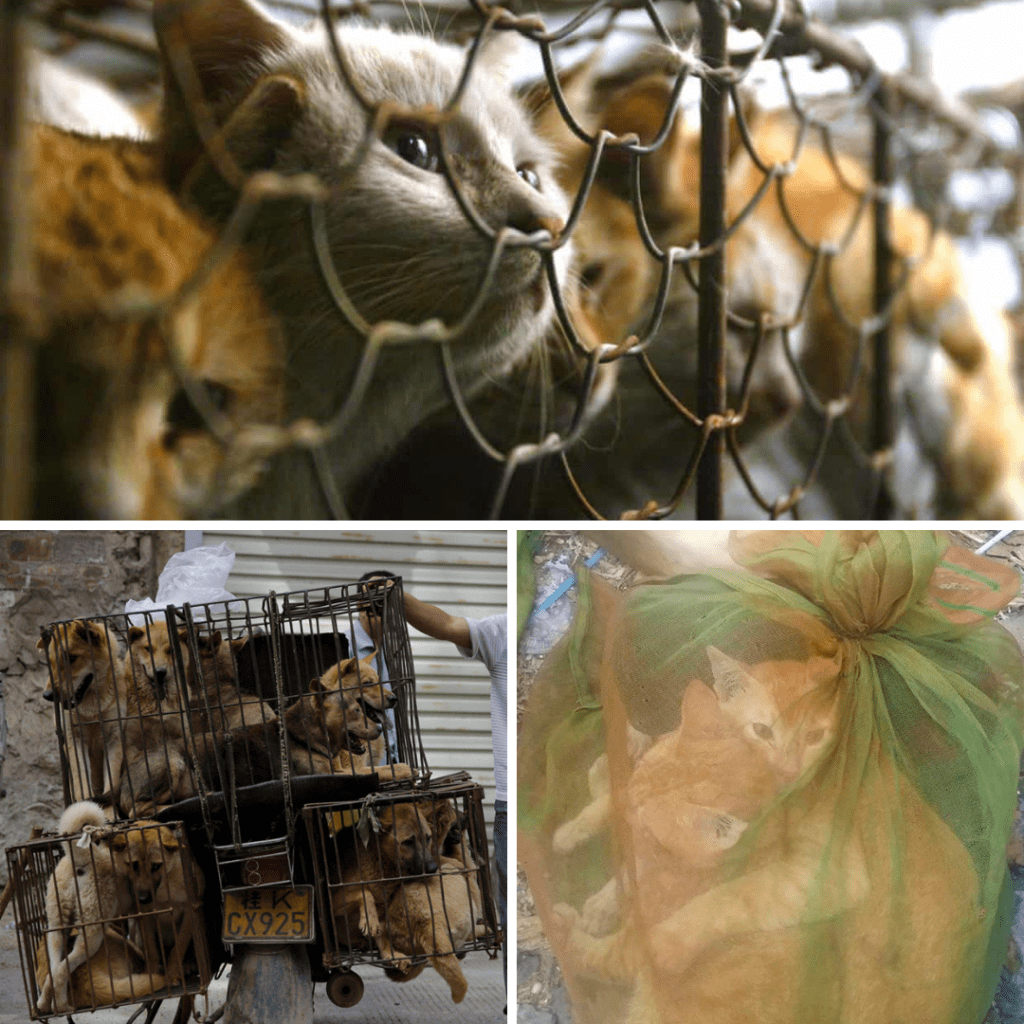 Cats and dogs rounded up in China and Vietnam to be sold for meat. A WCW investigation found that USDA purchased animals like these, killed them, and fed them to other cats.

Karma doesn’t exist because God DOES exist. Karma denies the existence of God.
Sign the petition against these atrocities.
Almighty God will deal with these wicked people when he requires their evil souls. But let’s do what we can here on earth to stop this now!

Well said. The guy became a minister by being UNABLE TO THINK FOR HIMSELF, like a horse with blinders- vision in a straight line, only seeing a minute portion of what is rally there. I could go on and on, it’s a pet peeve of mine because religion is so stupid. This man’s angry maniacal “God” of the Old Testament was an extraterrestrial, not really “god”. You’d think people would be smarter than that.

Yep, I agree, all these people that do evil works to animals need to burn in the pits of HELL.

This USDA funded kitten experiment HAS TO STOP NOW! No more!

This is disturbing! This is so against our animal rights laws here in America. How can usda support this and purchase dog and cat parts? For cruel experiments? This has got to end! This is so inhumane!

Linda, There are no animal rights laws in America.Money trumps (please excuse the pun) everything. I just wonder how many of our municipal shelters are sliding animals out the back door for $. We should hold them all responsible.

We are above this….this is barbaric!! Why is this happening…THIS HAS TI STOP

This is not right and should be charged with animal abuse

Extremely cruel and must be stopped

This is so EVIL and DISTURBING on so many levels!! This must END now!! Please DO SOMETHING!!!

WHAT THE HELL IS WRONG WITH THE BASTARDS AT USDA!!! HOW DO THEY LIVE WITH THEMSELVES OR SLEEP AT NIGHT. GOD ROT THE LOT OF THEM AS TWISTED EVIL SADISTIC NON HUMAN OR ANIMALS THEY ARE

This is unbelievable… I hope they all rot and burn down below.

There… Trump wants money for his boarder wall? Let him take it from the USDA! Maybe with no funding they’ll have to cut their hideous program! I really thought America was better than that. Let me correct, a lot of the American people have more compassion than the government. This article sickens me.

[…] to a new report by the nonprofit White Coast Waste Project (WCW) and former U.S. Department of Agriculture (USDA) […]

[…] to a new report by the nonprofit White Coast Waste Project (WCW) and former U.S. Department of […]

Please put a stop to these horrible inhuman experiments. I cannot believe that the USDA are using dog and cats who’ve been slaughtered by China to use for food for cats and kittens in labs. This is sickening! The Chinese have no laws in the treatment of dogs and cats there so that is insane to purchase dog and cats meat from them and then to hold cats and kittens in labs and force them to eat their own kind. What is wrong with these people in these labs. The whole situation is wrong, it’s called cruelty and the people involved should be locked up and the lab shut down. We should never be purchasing dog and cat meat from China or allowing any animal to be forced to become a cannibal. This is cruel and inhumane and needs to stop. Shut the labs down who are using our tax dollars for anything such as this.

Please stop this! Can’t you see how horrible this is???

Stop this! This is inhumane and disgusting. Can y’all not see the wrongfulness in this?

How dare they kill perfectly healthy kittens for their own selfish needs they are all BEEP and are all horrible people I with these BEEPS would just go and well this part is not child friendly. I will pound the USDA into DUST if I have to. SUPPORT THE FIGHT in this animal cruelty. HELP them. AND NOT a real email

I would be interested in reading the report & looking through the sources if it’s available.

There is no God, and i’m not sure about karma. 🙁 if either God or Karma existed, no such a horrific treatment and cruelty (abuse) would exist. 🙁

Well, the USDA has now reached a new low. Just when you think they can’t sink any lower, they come out with some kind of subhuman behavior. I’m amazed and disgusted…..

Say, you got a nice article. Keep writing. You recognize, a lot of persons are looking around for this information, you could help them greatly.