As White Coat Waste Project (WCW) has documented, the Cleveland Department of Veterans Affairs (VA) is one of the last VA facilities in the country still conducting painful taxpayer-funded dog experiments. Now, Fox 8 News is reporting that these wasteful tests have been halted.

The move follows WCW’s ongoing campaign and recent exposé showing that the Cleveland VA was still using taxpayers’ money to buy “friendly” hound puppies as young as 9 months old for nightmarish experiments in which the dogs were killed after being cut into and having their spinal cords severed. WCW also launched a tax season ad campaign against the lab, which has wasted $455,000 of taxpayer’s money on these unnecessary and cruel tests since 2017. 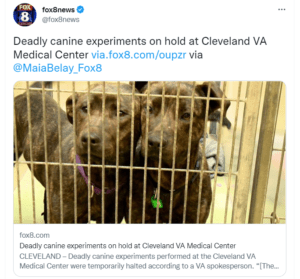 This could spell the end of this widely-opposed program. Documents obtained by WCW through the Freedom of Information Act (FOIA) and an analysis of federal spending records indicate that April 2019 marked the last planned shipment of dogs to the Cleveland VA, and no more have been purchased.  Additionally, this project is set to expire in September and a key Congressional committee just voted to cut all 2020 funding for the VA’s painful dog testing.

WCW billboard posted near the Cleveland VA during tax season in 2019.

We will keep fighting to ensure these wasteful tests don’t resume.  In the meantime, urge your Members of Congress to join the 100-plus lawmakers cosponsoring the bipartisan PUPPERS Act (HR 1155) to permanently cut federal funding for all painful VA dog experiments.

Why has this just been halted? Why not permanently ENDED?? There is NO need for ANY experiments on ANY animals whatsoever!