Congressman Tony Cárdenas (D-CA) wants to know why the U.S. Department of Homeland Security (DHS) has dramatically increased painful and wasteful taxpayer-funded tests on rabbits when, as he writes, other government researchers have stated, “animal models have limited relevance to humans and poorly predict effects in humans.” 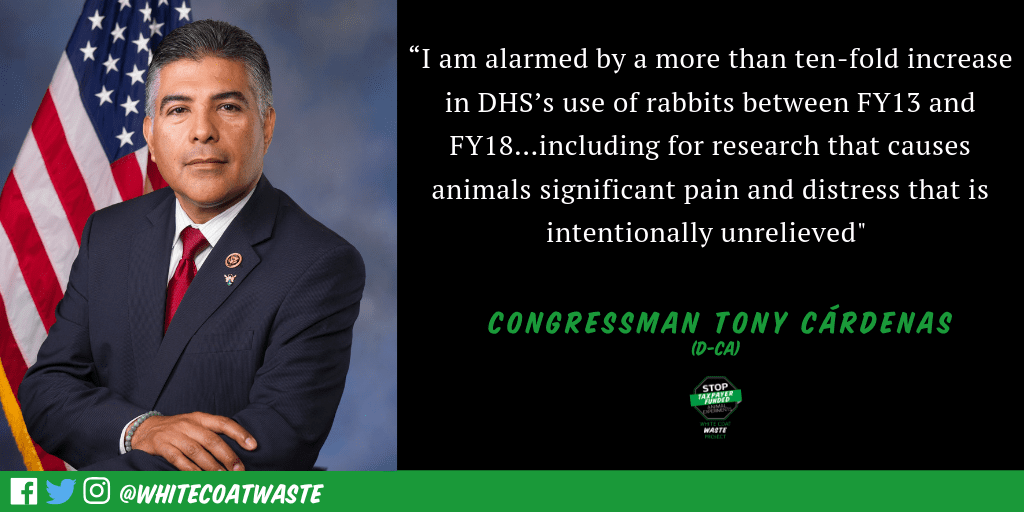 In a letter sent today to DHS, Rep. Cárdenas writes that he is “alarmed by a more than ten-fold increase in DHS’s use of rabbits between FY13 and FY18 (from 24 animals to 258), including for research that causes animals significant pain and distress that is intentionally unrelieved (USDA Pain Column E).” As reported in English and Spanish publications today, Cárdenas’ letter follows a White Coat Waste Project (WCW) analysis of federal records that found that DHS’s use of rabbits in these “maximum pain” tests rose from zero in 2013 to 184 in 2018.

The Congressman’s letter expresses concern about a lack of transparency about the agency’s animal testing and requests details about DHS’s experimentation on rabbits, and any work it’s done to develop alternatives to animal tests.

Today, I sent a letter to the Department of Homeland Security to inquire about the concerning increase in rabbit testing and the extent of the department’s animal research.https://t.co/G5yicqJV7O

There is some good news: Cárdenas commends DHS for ending its use of primates in painful tests and writes that agencies still abusing primates–like the National Institutes of Health and Food and Drug Administration should follow its lead.

Rep. Cárdenas has long been a leader on ending wasteful government animal tests. In 2017, he helped WCW end the Department of Veterans Affairs’ deadly methamphetamine tests on dogs and he is currently cosponsoring the PUPPERS Act to stop all painful  VA dog tests. Rep. Cárdenas is also cosponsoring the KITTEN Act and helped shut down the US Department of Agriculture’s “kitten slaughterhouse” earlier this year.

If you haven’t already, urge your Members of Congress to cosponsor the FACT Act and improve transparency about taxpayer-funded animal testing!

Thank you for all you do on behalf of the voiceless.

I want this stopped no tax dollar for death

STOP using our money to torture animals!!
You have no right to keep doing this! Sick and mean and disturbing!