As White Coat Waste Project (WCW) first exposed during tax season in 2017, the Department of Veterans Affairs’ (VA) Richmond, Virginia lab was the only facility in the entire federal government using tax dollars for excruciatingly painful experiments on dogs without anesthesia.

Now, as first reported by WRIC, documents obtained via the Freedom of Information Act (FOIA) by WCW reveal that the Richmond VA has discontinued its “maximum pain” procedures on dogs and will now provide pain relief. While there is still more work to be done to end all Richmond VA dog testing, this marks the end of the worst dog experiments inside the federal government.  WRIC also reported that dog testing at the Richmond VA has been cut in half since the beginning of WCW’s campaign. 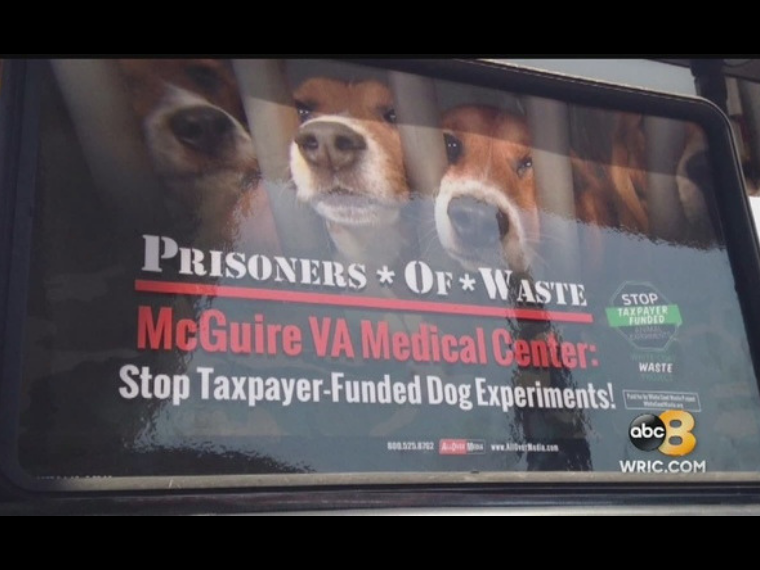 The Richmond VA’s maximum pain tests involved buying healthy puppies, causing heart failure by injecting latex into their arteries or implanting devices, and then forcing them to run on treadmills to stress their damaged hearts, procedures which caused pain that was left untreated. From now on, dogs will be anesthetized during these painful procedures.

The decision follows WCW’s aggressive ongoing campaign to end this waste and abuse and a historic first-in-the-nation law enacted in Virginia last year by State Senators Bill Stanley and Glen Sturtevant–with support from WCW–specifically blocking state taxpayer funds from being used for maximum pain tests on dogs and cats. It also follows pressure from veterans and more than 115 U.S. Congressmembers–led by Reps. Dina Titus (D-NV) and Brian Mast (R-FL)–supporting the PUPPERS Act to permanently stop all painful VA dog testing.

The end of the VA’s maximum pain procedures on dogs is welcome progress, but the Richmond VA is still wasting tax dollars on painful experiments on dogs even though other VA labs have completely ended their dog experiments following WCW’s campaign.  But, all of Richmond’s painful dog testing might finally come to a halt soon: The House of Representatives passed legislation earlier this year to cut all taxpayer funding for painful VA dog testing. More action on that is expected later this year. WCW also has several ongoing lawsuits against the Richmond VA and Richmond’s transit authority related to these wasteful dog experiments.

All species have a right to life free of pain, torture and/or confinement. Mitakuye Oyasin. Look it up please.

Stop stop torturing these poor helpless, defenseless, loving, giving, creatures. How would you like someone to do this to your children just to find out if something is going to cause a reaction or possibly kill them? What about all the pain loneliness, not understanding why you’re doing this to them, and the sad, sad looks in their eyes when you do it? You should be ashamed!

This type of HORRIFIC treatment towards animals is immoral unethical and criminal!!! These HEARTLESS INDIVIDUALS are criminals and should be locked away in jail… how anything like this is allowed to go on in the name of science is outrageous! You have to think about the heartless individuals that wake up every morning and torture these animals for a salary…. THEY ARE HEARTLESS AND CRUEL & THEY SHOULD BE LOCKED UP IN JAIL WHERE THEY BELONG!!!!!!

Horrible, Outrageous, Stop It All! How Can People Who Perform These Stupid Useless Unnecessary Test!!!! Why!!! It’s So Heartbreaking! How Do They Go Home and Sleep! And Then The Poor Survivors, You Can’t Give To a No Kill Shelter Or Sanctuary! How Hard Is That? How Much Time Is That Take? How Much Effort Is That?? This Is A Wasteful Sick Way Of Spending Money To Convince Yourself What Does and Doesn’t Work!!! What Happen To Good Ole Comments Sence? Aren’t You Scientist Or Drs Or Technicians Or Ethical Human Beings????? No Your Not! KARMA Some Day Something Will Happen To You And You Will Be In The Hospital All Cut Up and Dying And HURT!!! And Then Maybe You Will Feel Some PAIN Of What You’ve Done To These Poor Dogs! Maybe You Should Experiment with Each Other!!!! Use Real People!!!!! Or Go Get The People On Death Row!!!! Use Them!!!! STOP STOP This Nonsense!!! Look At What You’ve Done To These Beautiful Helpless Loving Sweet Loyal Dogs!!!!!! Why!!!! Enough Of This Frankenstein Experiments!!!! Have a Heart And Soul!!!! Close Down!!!!! Open another Business!!!!! REPENT!!!!! Ask GOD For Forgiveness!!!!!!! Give Up This Whole Thing!!!!! Place The Dogs So They Can Be a Dog and Be Happy!!!!!!! Thank You!!!!!!

THIS IS DISGRACEFUL- WE MUST ASK ‘PRESIDENT TRUMP’ TO INTERVENE- NOW = : (

There has to be a law against this animal [email protected]

Yes, I agree!! We should all email the Whitehouse!

Ther is enough pain in this world already. This has to stop. NOW. These poor dogs and cats are innocent. They haven’t ever hurt a soul. It makes me cry in disgust. Let these beautiful animals be adopted out. So they can live the rest of their lives with no pain. I beg of you!!! Sincerely Denise 😢

we want no more experiments on animals . any animals!!!

THIS IS BEING DONE FOR THE EVIL DOLLAR!!! THESE LABS ARE FUNDED BY OUR GOVERNMENT!!!!

If you want to know about vivisection read Slaughter of the Innocent by Hans Ruesch. It’s out of print now but if you can get a copy any which way get it! This book debunks EVERYTHING about animal research and what a waste it really is. Does nothing to help human diseases or anything else these pseudo scientists claim it does! All it does is satisfy the morbid, macabre sense if curiosity of the idiots who do this type of thing! Great book.

It is unimaginable how the humans dare exploit the rest of the Living Beings for thei own benefit.(And some humans,do the same to many members of their own species).When shall we all decide to eliminate ANY form of VIOLENCE on this Planet???

Stop using those beautiful dogs, use people instead.

Stop all ani.al testing!!! Not just painful but heart attacks and all the cruel acts being do e to them this is just NOT FAIR TO ANIMALS AS THEY ARE E OUR BEST FREINDS AND FAMILY!! USE PEISONERS ON DEATH ROW THEN THE TESTING WOD BE JUSTIFIABLE AS HUMAN TESTS ON HUMANS IS THE WAY THINGS SHOUKD BE. SOGS ARENT HUMANS TBEY ARE BELOVED PETS AND COMPANIONS NOT YOURS TO DEFILE AND MAMW AND KILL…