As White Coat Waste Project has exposed time and again, the National Institutes of Health (NIH) has more tax money than it knows what to do with, leading to $20-billion-plus of wasteful and nontransparent spending on animal testing each year. Now, we’ve discovered the NIH is so #AddictedToSpending that it’s shipping our tax dollars to Great Britain to get animals in labs hooked on drugs and alcohol.

As first reported by the UK’s The Independent, a new WCW investigation of federal spending found that the NIH sent over $17 million tax dollars to British laboratories to create animal addicts, including:

The last example has already caught the attention of waste warrior Senator Rand Paul (R-KY) who criticized the project and featured the ridiculous study in the 2019 Festivus edition of his Waste Report.

Here in the U.S., WCW is trying to launch an ad campaign near NIH headquarters to let taxpayers know they’re being forced to pay for these foreign experiments, but the government is unlawfully censoring us. 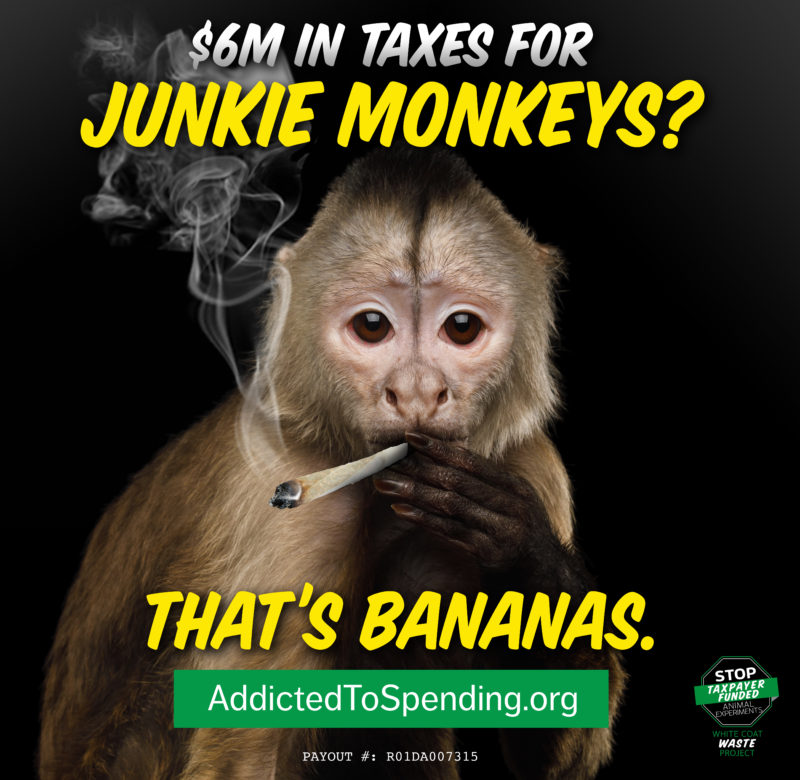 Tell Congress to stop wasting your money on these outdated and pointless experiments!

The so called scientist that torment these animals need to have this done to them. This is nothing but animal cruelty.

Do these scientists not know that alcohol, cocaine, heroin, nicotine and morphine are bad for humans, especially pregnant ones??? Maybe $17 million of tax payer dollars could be kept in the U.S. and study things that do not include animal abuse.

Just when you thought the situation was under control…

Humans need to learn to respect luv and care for animals to not do so is inhumane and monstrous! Torture is not culture! “The greatness of a nation is judged by the way it’s animals are treated”!

STOP these horrific animal cruelty experiments! These inhumane tests are causing unnecessary pain and in some cases death to these living, breathing beings that were created by God! I know God would not condone your harming them. End it now before any more innocent animals suffer this unspeakable cruelty!!!!!

So terrible for these poor animals. We need to stop this NOW!

Absolute waste of our money and as stated
animal cruelty. Must stop.

Absurd …… stop these now !! Animals value their lives as well …. and we as people sure aren’t always worth saving …. look what We have done to the environment and many species of animals ….

What type of bastard human beings are these people, they obviously have no morals, compassion or any decency of any kind, I hope their karma strikes heavily. This type of horror needs to be stopped

you think that is what there doing with that money paying students who already payed to learn to be told to do these experiments, Slaps for head, some one is paying off some one or some group.computer simulations can do about the same thing. and for a lot less money.

Money to make animals suffer. What a waste.

This is nothing more than Animal Abuse at its cruelist. ALL OF THESE SO CALLED EXPERIMENTS MUST STOP. ANIMALS DESERVE BETTER. HUMANS ARE THE WORST ANIMALS AND THE CRUELIST IN THE WORLD.

HOW FUCKING EVIL AND SICK IS THIS. TO GIVE ALCOHOL AND DRUGS AND CIGGERETTES TO INNOCENT ANIMAL BEINGS WHO HAVE NO VOICE!!!! AND THE SICK PHYCOTIC FEELINGLESS BASTARD ANIMAL TORTURERS WHO ENJOY DOING THIS TOO THEM THESE BASTARDS NEED TO BE INPRISION THEY ARE SICK LO LIFES.

Stop this barbarism don’t encourage any other country to do it!

They need to stop these experiments!!!

It is abuse and murder, just that simple!

The Republic of Ireland hosts a major public & private vivisection industry with its non-enforcement of EU directives on phasing out animal testing. For the last 7 years Ireland’s number of animal tests per year has been steadily increasing with almost no inspections of animal testing facilities and no unannounced inspections. The public health system is even proposing the creation of a new large animal research facility. Ethics dumping is big business in Ireland.