VA dog testing on a short leash after 2019 WCW wins

2019 was historic for White Coat Waste Project’s years-long campaign to stop the Department of Veterans Affairs’ (VA) wasteful taxpayer-funded dog testing. As one headline put it, the “VA’s taxpayer-funded dog experiments slow to a near-end” after several key WCW victories that shut down 75 percent of the agency’s dog testing, including the VA’s dog labs in Los Angeles, Milwaukee, Cleveland and “maximum pain” procedures on dogs at the Richmond VA. Then, last month, Congress and President Trump took bold action to relegate the VA’s dog testing to the history books.

The 2020 federal spending bill signed into law includes language lobbied for by WCW that strengthens restrictions on VA dog testing and directs the VA to develop a plan to phase out all experiments on dogs–as well as cats and primates–by 2025 (see section 249 on page 665). This is the first time in history that Congress or the President has given a federal agency a deadline for the end of animal testing.

Lara Trump, a longtime animal advocate who has been working with WCW to ensure this issue is a priority for the Administration, also celebrated the major developments: 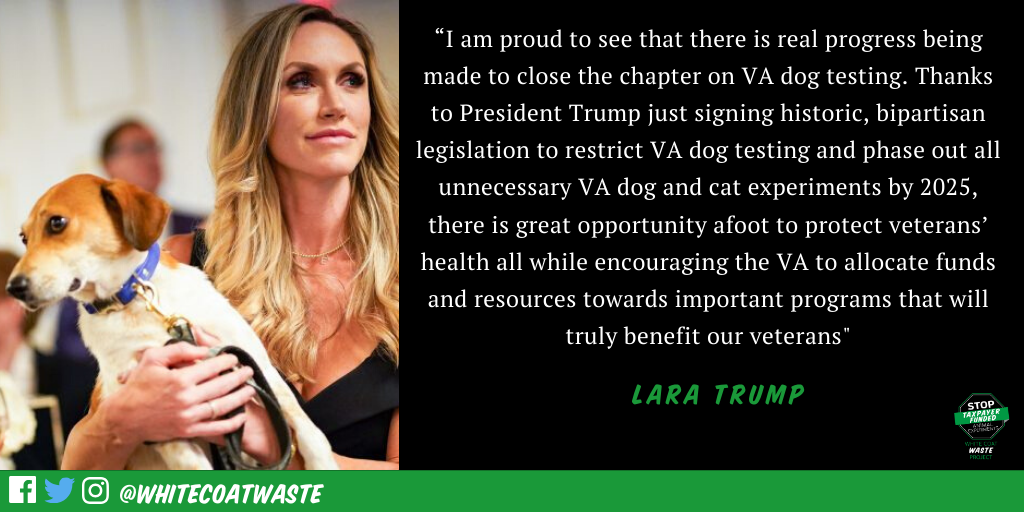 These wins would not be possible without the support of WCW’s dedicated advocates. Help us continue the momentum to stop the VA’s taxpayer-funded dog abuse before 2025! Tell Congress to pass the PUPPERS Act and permanently de-fund the VA’s painful dog testing.

PLEASE PLEASE STOPE THIS CRUEL ABUSE TO ANIMALS THAT IS CALLED TESTING. THEY DO NOT DESERVE TO SUFFER LIKE THIS. THERE IS WAY TOO MUCH TECHNOLOGY THAT CAN BE USED INSTEAD OF TESTING ON THESE POOR INNOCENT AND HELPLESS ANIMALS. WHAT IS THE DIFFERENCE BETWEEN THESE RESEARCHERS TESTING ON ANIMALS AND ANIMAL ABUSERS? PRETTY MUCH NOTHING BECAUSE THEY ARE BOTH TORTURING THESE ANIMALS AND MAKING THEM SUFFER NEEDLESSLY. PLEASE STOP ANIMAL TESTING.

“Maximum Pain” experiments on puppies? What a degenerate country we are. At 63, my husband and I no longer display the flag or have faith in the basic goodness of Americans to right this ship.Why 2025? Why not NOW, the way we converted factories for war production in WW2, IMMEDIATELY because we HAD to? I haven’t missed an election, even a local one, since ’80, but learning that we torture baby animals gives me total apathy- about everything in gov’t but saving those animals.