UPDATE (4/17/20): A month after WCW’s exposé, President Trump publicly committed to ending taxpayer funding for the Wuhan Institute of Virology.

Original post (3/24/20)The deadly coronavirus (COVID-19) is quickly spreading throughout the nation and ravaging public health and the global economy.  By now, you’ve likely read that the disease has been traced to a so-called “wet market” in Wuhan, China where live animals–domestic and wild–are slaughtered and sold for consumption. But did you know that American tax dollars have been unwittingly funding China’s wet markets and animal testing labs for years? White Coat Waste Project has the receipts.

USDA spent tax dollars at China’s “wet markets”
Last year, WCW exposed that for years–and as recently as 2014–U.S. Department of Agriculture (USDA) bureaucrats used our tax dollars to secretively fly to China, purchase dogs and cats from disease-ridden “wet markets,” fly back the animals’ organs on their carry-on luggage, and then force-feed the dog and cat flesh to kittens in cannibalism tests at a federal laboratory in Maryland. WCW’s campaign shut down the wasteful decades-old, $22 million study last year, but if it wasn’t for this victory, USDA experimenters could potentially have brought back COVID-19 and other dangerous viruses to America. 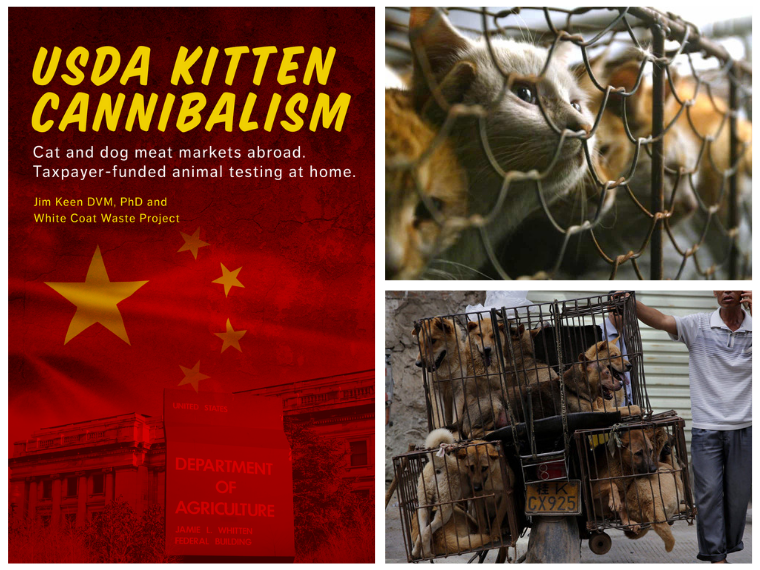 In 2019, WCW exposed that the USDA was purchasing dogs and cats from wet markets in China and other countries and shipping them back to the US for taxpayer-funded experiments.

Tax dollars funding animal testing in China
WCW recently exposed that the U.S. National Institutes of Health (NIH) has been sending tens of millions of tax dollars specifically for animal testing to foreign countries each year. The NIH has authorized 24 labs in China to spend your tax dollars on animal experiments, and has been funding animal tests at the Wuhan Institute of Virology. Reports also indicate that experimental animals from labs like this in China are sometimes sold to wet markets for consumption. 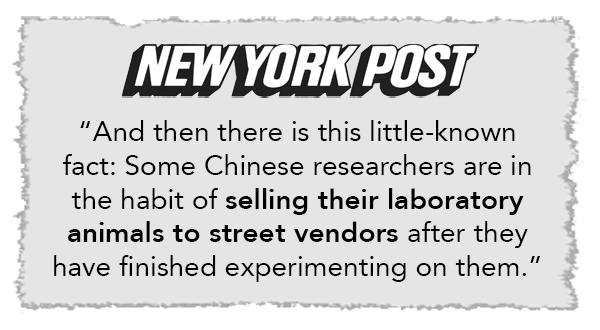 If you’ve already washed your hands and kept a responsible social distance, here’s one more thing you can do: tell Congress to stop sending your tax dollars to wet markets and animal labs in China!

Despicable. Why dabble in this? Can’t we spend tax money in ways that are positive and further fairness for ALL sentient creatures?

This is cruel and evil should Not be Allowed to Harm Or Kill Animals. This madness needs to stop! No animal deserves this treatment. The government has no right to pay taxes for animals to be used for experiments and for meat consumption. This is a sin ., this is animal cruelty .animal abuse .This must stop!

It is horrific that our Country would be involved with this horror if animal experiments in China. It’s beyond anyone’s worse nightmare the torture inflicted on innocent animals and to torture and experiment with our tax dollars is unforgivable. Stop your shameful actions.

Unbelievable that the U.S. could be involved in this.

Stop killing animals and us

I am tired if hearing how we allow animal abuse. Now we are even part of this? I am ashamed of you all. Stop using US funds for animal abuse and start using it to combat animal abuse. Thank you.

Its ELITE under control of evil energy that produces only negative rezults this is why such siffern to so many animals. The coronavirus is definetly from flesh they kill. In about fifty years were going in to peace. The light of positive energy will run negative away. No more suffern of animals and good people dien. The ones do these experiments will pay in horrible death here and the after life The spiritual guardians left truth.

How can the United States be involved in this cruelty? My taxes pay for these ridiculous experiments??? This has got to be stopped!!!!

This should be illegal.

Animals are not food stop ezting dogs and cats there pets

You will all pay for your sins someday

Are you f****** kidding me! Remove this funding now lest you yourself wind up in someone’s carry-on luggage! By your own hands for karma is real!

This is despicable behaviour the US and China call themselves great nation l think they are very deluded countries and are responsible for many of the worlds problems, so please come down off your mighty throne and start acting responsibly to the rest of the world, if you are so great you will make hugh improvements

As the truth surfaces about the USDA and it’s practices that endanger all life, there will be a reckoning. American citizens do not want their tax money to pay for suffering and death.

How can you justify this??? You can’t!!! You’re inhuman for supporting animal abuse. Stop using tax payer money to further the suffering of these poor animals who did nothing wrong and don’t deserve a fate like this. It’s just wrong.

It doesn’t surprise me that this evil ass government would be behind this stuff. I quit a job I had once I found out they were experimenting on animals. This covid is exactly what can come of stuff like what there doing. These government agencies behind this needs to get a dose of their on medicine. There’s a special place in hell for people like you all, this is for China to.

All activity at the USDA and the NIH should be suspended until an investigation is completed and those responsible are fired and replaced. Also place cameras in slaughter houses like the Isreali’s and Europeans do. And put congressman King from Iowa in jail just for starters!