It’s shocking but true: The U.S. government went on a spending spree with your tax dollars at China’s “wet markets”—where scientists believe COVID-19 originated—to buy cats and dogs who were killed then victims of wasteful experimentation.

The Chinese “wet markets” at the center of the coronavirus and the source of American lawmakers’ ire?

As first reported by the Washington Examiner, Congress has joined us in the fight to end the squandering of taxpayer dollars in this outrageous way—which is not just wasteful and cruel, but presents a serious risk to human health.

You’ve Been an Unwitting Customer of China’s Dangerous Wet Markets!

Last year, White Coat Waste Project (WCW) uncovered how for years the U.S. Department of Agriculture’s (USDA) kitten slaughterhouse used taxpayer dollars to purchase dozens of cats and dogs at China’s wet markets (and elsewhere around the world) for use in lab experiments back in the States. 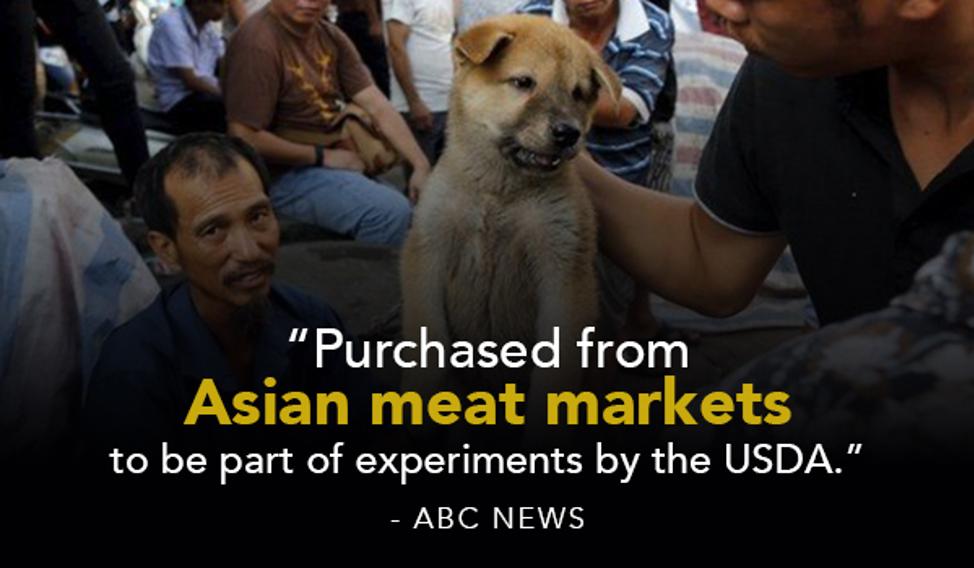 In fact as recently as 2015 the agency was buying live animals at wet markets, having them slaughtered, and bringing their body parts back to the United States for experiments. One gruesome detail among many: The cats’ and dogs’ body parts were transported in carry-on luggage. Then they were fed to cats in USDA labs, who were made to be “kitten cannibals” for bizarre and useless experiments.

Thanks to outstanding leadership from Rep. Brian Mast (R-FL) and others, we have since shut down those experiments, and adopted out the surviving cats and kittens.

The wet markets in China are disgusting. To think that taxpayer dollars were spent to buy animals from these markets for cruel experiments is insane. We fought to end this practice & I’ll keep fighting to ensure taxpayer dollars never go to them again!https://t.co/hf6OOPckMa

But that’s not the end, because—if you can believe it—we recently uncovered that the federal government is still funding cruel animal testing in Wuhan.

Tell the Government to Stop Using Your Tax Dollars in This Wasteful, Dangerous Way

We are continuing to investigate the gory details, and we will share them with you as they emerge.

Taxpayers should never be forced to bankroll dangerous animal abuse in foreign countries and we’ll continue to work with Congress to put an end to this egregious misuse of Americans’ tax dollars.

I’m not paying for their nastiness

I can say this you sick EVIL SO

I have had enough you SICK EVIL SOULLESS MONSTERS how dare you support this you are physcopaths GOD is watching you we will not allow this we are going to put a stop to this NOW you will
Be judged by what you have done there is no escaping it. STOP the world knows now what you are doing and what you have done EVIL

This must be outlawed!!!

Business as usual has to change. We must stop animal cruelty such as the wet markets in China and animal abuse in labs. The whole work needs to change how we treat animals our co beings on this earth!!!

Thank you for sharing!

Out tax dollars should be spent fighting AGAINST animal cruelty, NOT supporting it.

Sad ly the general public have no idea of the corruption, greed, exploitation, abuse, unimaginable cruelty and suffering and illegal actions which go on between nations like China, USA, Africa, Russia, Asia on the whole, to name but a few of vulnerable humans, animals, the planet and all living species we share this planet with. Until there is true transparency and honest dialogue and sharing of information between those in Government and World leaders and the public, so we all can make the right choices in not allowing such heinous crimes against any living being, sadly this cruelty and totally unjustified abuse will continue. We have to be better than this. We as human beings are not the superior species despite what some may think.

This is horrendous! Why humans think it’s ok to torture another living creature is something I can’t fathom!! This needs to stop!!

Business as usual has to change. We must stop animal cruelty such as the wet markets in China and animal abuse in labs. The whole work needs to change how we treat animals our co beings on this earth.

thank you for all you do … good luck in stopping the use and abuse of non-human animals … unfortunately, it is BIG dollar business in the US and ALL around the world … and, sadly, most people continue to believe the propaganda that it is all being done for human health and safety, as if modern technology doesn’t exist in labs … continue to speak up for the voiceless!

the madness needs to stop

I’m going to be sick with this new information!

Stop this unnecessary and cruel act

No more of our taX
dollars for this type of funding

I heard on the news last night that we have wet markets in the states! ALL of this has to STOP!

I do NOT want my tax dollars used for this barbarism!!!

Tragic, unnecessary and cruel experimentation! “Until he extends his circle of compassion to all living things, man will not himself find peace.” – Albert Schweitzer

I have been getting email and literature for donations for years to stop the white coats for CRUEL TESTING ON ANIMALS FOR YEARS. NOW I FIND OUT OUR GOVERNMENT HAS BEEN BUYING ANIMALS FROM WET MARKETS FOR CRUEL TESTING ON ANIMALS. WHAT TIME OF GOVERNMENT AND LABS THAT COLLECT FUNDS TO STOP THIS AND THEN TURNS AROUND AND USES OUR DONATIONS TO BUY ANIMALS FROM ANOTHER COUNTRY TO CONTINUE THIS HORRIBLE SICK CRUEL WAY TO TREAT OUR BEAUTIFUL INNOCENT ANIMALS. HOW CAN THESE PEOPLE SLEEP AT NIGHT. HOW CAN THEY LOOK AT FOOD ON THEIR TABLE AND NOT SEE WHAT THEY DO TO THESE ANIMALS.
I WILL NOT DONATE ANOTHER PENNY TO THIS SICK PEOPLE WHO MOST LIKELY LAUGH AT US FOR DONATING MONTY TO STOP-I-MEAN-STOP THIS. THEN THEY STILL BUY ANIMALS IN ANOTHER COUNTRY. WE SHOULD COLLECT THIS MONEY AND PUT A STOP TO THESE LIARS-LIARS-LIARS

Enough is enough. No more animal neglect and abuse.

Rose. Sorry for typing errors that misspelled words. You know what i mean. Do not donate to these sick labs., April 15, 2020 Reply

I’m so sick of the cruelty that happens in China, and around the World, and I’m Not paying for it! Eating dogs and cats; bears locked in cages, having their bike extracted…this makes me beyond sick! Stop!

Stop all animal testing. My cosmetics don’t need animal testing and people are plenty willing to test medicines. After all thats the only way to make sure it works on people

This has to STOP world-wide!

This is obscene! No taxpayer money for animal torture.

So cruel somehow we have to stop this !

This is so upsetting that we are funding this without knowing. Thank you White Coat Waste Project for bringing these atrocities to the Public’s attention.

This is disgusting and outrageous. Using American tax payer dollars to torture animals is bad enough. The fact that you’re getting the animals from Wuhan, where the corona virus originated, is inexcusable and unconscionable.

Terrible. This needs to be stopped immediately!

If this is true which I believe it our country has problems!

Meddling with known danger financed by the USA, viruses already released- the day had to come when they went too far-and what’s happened? Hell on earth! Heads should roll for this!

Please stop and have empathy for these poor animals. No excuses or justifications!! Just stop!

Stop funding extreme and sadistic cruelty by the country of China!!!! Horrible!! Needs to stop!!

This must stop. No animal deserves this. What kind of humans would be part of this travesty.

how do we boycott this ? i feel so bad for these poor, cute animals! i wish I could have the kitties, since I ‘m a cat lover. It is sickening how these peole abuse these animals, and on top of that, because of China being sneaky and not being honest about this virus, it will cost billions, and many lives. BOYCOTT CHINA PRODUCTS

The fact that animals are used repeatedly for horrendous experiments then after years of testing and without any results the work continues is horrific. The fact that the people of the United States are paying for this is even more horrific. That money could be used for most needed health care for their citizens. I am unable to vote as I live in Canada but the feel the pain of what is happening.

i think we should all stop paying taxes – and then only pay to the organizations/projects/experiments that the government presents to us and that we vote on and approve.

We are the only species that inflict pain on animals and humans. Yes exposure of this evil, to educate the people. Let’s all lock arms and rise above this. Experiments so big pharma can make make huge profits off of innocent animals (most babies) via pain and suffering, are just wrong!!

I will continue to oppose this cruelty by not supporting it!

THESE HOUSE OF HORRORS MUST END IN ASIA AND THE UNITED STATES!!! Horrific torture to innocent animals!!!! Buy products that are cruelty free and support White Coat Waste to END THIS ABUSE OF ANIMALS AND OUR TAX DOLLARS!!

Us tax dollars should not be used for Chinese cruel animal experiments. Stop this now!!!