UPDATE (4/28/20): The Trump Administration has officially cut funding for animal experiments at the Wuhan Institute of Virology and requested that over $300,000 0f remaining 2020 taxpayer funds be returned.

UPDATE (4/17/20): A week after WCW’s exposé, President Trump publicly committed to ending taxpayer funding for the Wuhan Institute of Virology

Original post (4/17/20)There’s only one way to put this, and we apologize in advance for the pun:

Because these revelations are so…we’re just going to say it…toxic, our Wuhan exposé has been blowing up the news: here’s Fox News picking it up (and making it the homepage’s top story 👇🏼), and coverage from the Daily Mail, the Washington Examiner, and more, more, more, and more outlets around the world! 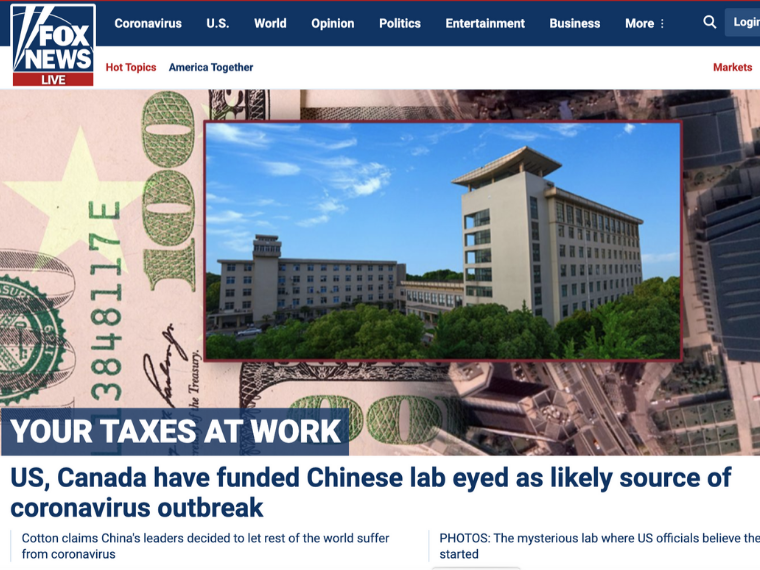 Why in the WORLD is the National Institutes of Health giving millions of YOUR 💰to a secretive government-run Chinese lab for dangerous coronavirus experiments on animals? 😿 🐶 💉 🇨🇳 💸

Or as @TuckerCarlson put it: “Heard anything more perverse than that today? Probably not.” pic.twitter.com/NpWZfCelIT

Can’t say it better than @LouDobbs: “What in the *hell* was the National Institutes of Health thinking when they’re paying money, taxpayer money, to a virology lab in Wuhan, China? Perhaps someone close to @realDonaldTrump might just look into that.” 😾 💰💉🇨🇳 pic.twitter.com/2TlfUtg372

It made headlines worldwide:

This investigation is so 🔥 that the day it hit, Congress began calling for the NIH to pull funding:

It has to end now.https://t.co/Bjxs89GPgw

There is zero doubt that the Chinese communist government has American blood on its hands. The NIH must immediately stop deploying American tax dollars to China for this dangerous research. https://t.co/skkRQ6DpBa

Going viral is great when it comes to news, but we’d rather the government do what’s right and cure this problem by stopping all funding of animal experiments in China.

i say call them out and hold them accountable