And it’s not just us saying it—this comes from the National Academies of Sciences.

As first reported by the Washington Post and USA Today, today the National Academies of Sciences (NAS) released a comprehensive review of dog testing at Department of Veterans Affairs (VA) facilities—and confirmed what we directly told the NAS committee conducting the review: Most VA dog testing is unnecessary, and the VA needs to step up efforts to prevent wasteful dog tests and develop and use alternatives.

Photos taken by a whistleblower inside a Department of Veterans Affairs lab in Richmond, Virginia where dogs are subjected to painful taxpayer-funded heart attack experiments.

The NAS, a nonprofit organization that advises the government, launched its review of the VA’s dog testing program following three years of WCW investigations, lobbying, and campaigns against government dog experiments. 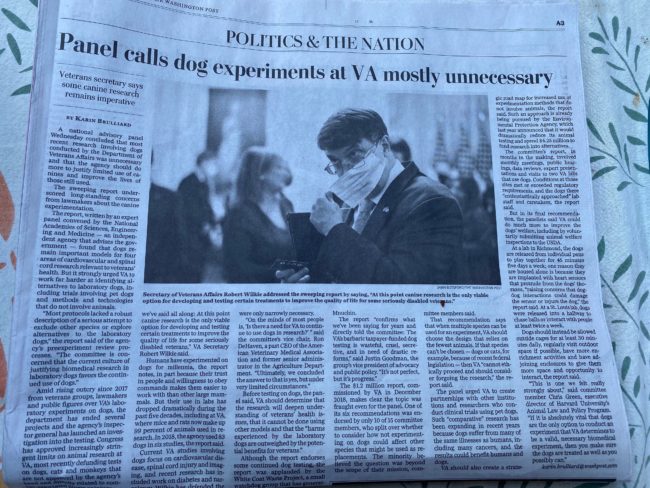 The Washington Post carried its story about the NAS report in its print edition.

Science Magazine credited WCW in its 2018 story about the VA’s dog testing program “going under the microscope,” noting that the “review traces back to a campaign launched by the White Coat Waste Project in March 2017.”

A national advisory panel, @theNASEM, released a report concluding that most recent @DeptVetAffairs research involving dogs was unnecessary and that the agency should do more to justify limited use of canines and to improve the lives of those still used.https://t.co/WF8LfmWDus

We sure think that’s right!

An 18-month study has concluded that the VA needs to do more to stop cruel and inhumane experiments on dogs. I have fought the VA on this for years. The recommendations are a step in the right direction but we need to end this canine house of horrors. https://t.co/drJkX7MEhi pic.twitter.com/XqIlubtCOt

Thanks to WCW’s advocacy and leadership from Congressmembers on both sides of the aisle, the VA’s use of dogs in painful experiments is already at its lowest point in recent memory.

Cruel and wasteful dog testing at the VA must end. A new report confirms that most of the VA’s dog testing is unnecessary, which is why we must pass our bill, the PUPPERS Act, now to protect these animals & find new alternatives to animal testing. https://t.co/TYkXXBAPjz

With this report’s recommendation to further restrict VA dog experimentation and bipartisan legislation enacted last year directing the VA to phase out dog, cat, and primate testing by 2025, this shameful taxpayer-funded program will soon be relegated to the trash heap of history.

More than 120 members of Congress have joined our fight by introducing the Preventing Unkind and Painful Procedures and Experiments on Respected Species (PUPPERS) Act (HR 1155) to de-fund “maximum pain” experiments and other cruel and wasteful dog testing at the VA.

I’ve been working to end the VA’s harmful, taxpayer-funded medical experiments using dogs. This recent report shows why we need alternative testing methods and why Congress needs to pass the PUPPERS Act, which I’m proud to cosponsor. https://t.co/AYJ5IooBzC

We are grateful to Rep. Debbie Wasserman Schultz (D-FL), Sen. Brian Schatz (D-HI), and PUPPERS leads Reps. Dina Titus (D-NV) and Brian Mast (R-FL), and thank them for their leadership on this issue, and for recognizing—even before the NAS—that VA dog testing is unnecessary.

I’ve said for years that painful dog testing at @DeptVetAffairs is cruel and unproductive. That’s why I introduced the PUPPERS Act with Army vet @RepBrianMast to end it. These new scientific findings make clear that the VA should make serious changes. https://t.co/qE02VxsEyd

Veterans and other taxpayers should not be forced to foot the bill for wasteful and cruel VA dog tests that are opposed by most people and—as is the case with VA’s ongoing dog testing—are outside of the VA’s mission to address veteran-specific ailments.

I’ve always believed painful experiments on dogs were cruel and an unnecessary waste of taxpayer dollars. These new findings should be the final nail in the coffin – no more dog testing by the federal government!https://t.co/TrEoZ7MPGj

The NAS’s conclusion that most VA dog testing is unnecessary also provides the basis for holding other government agencies accountable for wasting tax dollars and abusing dogs in needless experiments.

Please take a moment to write your Congressmembers and urge them to support the bipartisan PUPPERS Act (HR 1155) to permanently cut federal funding for all painful dog experiments at the VA!

We need to stop this barbaric ways of using her animals for testing 🤮🤮🤮🤢 we have enough people in jail to use for testing that’s what you should be doing shut the white coats down.

THIS NEEDS TO STOP AND I APPRECIATE ALL THE PEOPLE THAT SUPPORT ENDING THIS TORTURE AND BARBARIC CRUELTY😤😤😤 SOP THIS FOR GOOD, NO MORE WASTE OF TAX DOLLARS, NO
MORE FUNDING FOR THIS SADISTIC CRUELTY☠️☠️☠️🤬🤬🤬🤬🤬😤😤😤😤😤😤☠️☠️☠️

All animal testing should be stopped.

stop this horrific cruelty of hurting these poor animals , they are innocent ,and Gods creature who have a right to live on this earth too, and not be used and tortured for medicine, makeup, cloths, food etc, … they can’t fight for themselves , they are loving , kind , and how you people can torture them, is beyond my comprehension, and will only come back to you in Gods time. Let them live , just has you live, STOP THIS SICK TORTURE ON OUR ANIMALS

THIS IS SO SICK AND WRONG!! CHEAP BASTARDS THERE ARE PEOPLE WILLING TO GET PAID FOR YOU TO EXPERIMENT ON THEM! DO SO!!

Respect animals. Stop testing on those who do not volunteer.