What’s black and white, and 🔥  all over? News stories about the National Academies of Sciences’s (NAS) comprehensive review of dog testing at Dept. of Veterans Affairs (VA) labs, that’s what!

The NAS report came out yesterday, following three  years of WCW investigations, lobbying, and campaigns against government dog experiments—and it confirmed what we said to the committee conducting the review: Most VA dog testing is unnecessary, and the VA needs to step up efforts to prevent wasteful dog tests and develop and use alternatives.

You know and we know this is a Very Big Deal.

We are thrilled so many important news outlets agree—and that they’re highlighting how our work spurred the report, and our efforts to put an end once and for all to the VA’s cruel, wasteful taxpayer-funded dog experiments. 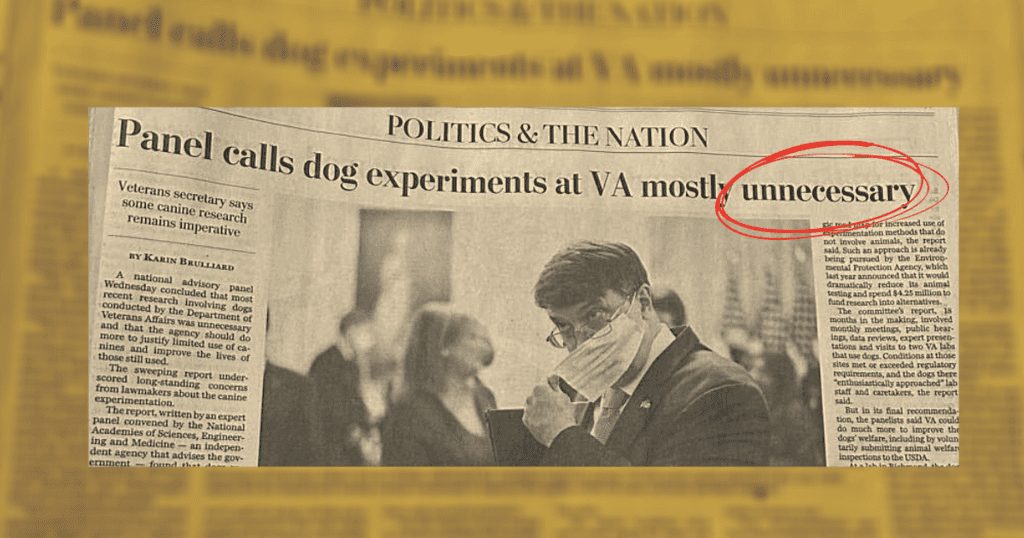 The Washington Post story made it into the paper’s print edition!

Here’s the Washington Post’s great story, quoting our VP Justin Goodman—the piece was also picked up by Stars and Stripes:

The report “confirms what we’ve been saying for years and directly told the committee: The VA’s barbaric taxpayer-funded dog testing is wasteful, cruel, secretive, and in need of drastic reforms,” said Justin Goodman, the group’s vice president of advocacy and public policy. “It’s not perfect, but it’s progress.”

A national advisory panel, @theNASEM, released a report concluding that most recent @DeptVetAffairs research involving dogs was unnecessary and that the agency should do more to justify limited use of canines and to improve the lives of those still used.https://t.co/WF8LfmWDus

And USA Today‘s story, which got reprinted in newspapers all across the country:

“Veterans and other taxpayers should not be forced to foot the bill for wasteful and cruel VA dog tests that are opposed by most people and — as is the case with VA’s ongoing dog testing — are outside of the VA’s mission to address veteran-specific ailments,” he said.

Lawmakers and critics raised questions about the invasive and ultimately fatal experiments. https://t.co/GUTKGhAsuQ

Military Times, cited us too:

“Veterans and other taxpayers should not be forced to foot the bill for wasteful and cruel VA dog tests that are opposed by most people and — as is the case with VA’s ongoing dog testing — are outside of the VA’s mission to address veteran-specific ailments,” said Justin Goodman, vice president of advocacy and public policy for the group.

As a proud pet owner and animal rights advocate, the issue of animal welfare and pet safety is important. That’s why in Congress I introduced the Puppers Act to end cruel and unnecessary testing on dogs at the VA. https://t.co/ODgGtFWtrx

That the media would be 👀  about the report is no surprise. We’ve been working with Congress and advocates for years to end the VA’s cruel and wasteful dog testing program, and the media’s been covering our efforts, and our successes, all this time.

The FDA understands that lethal #dog experiments are cruel and outdated. When will the VA and our other federal agencies catch on? https://t.co/LH2kqRyXHY

Of course we’ve got Science Magazine crediting WCW in its 2018 story noting that the NAS’s “review traces back to a campaign launched by the White Coat Waste Project in March 2017.”

Putting an end to the VA’s brutal (and wasteful) dog experiments is not only the right thing to do, but it is a win for veterans, taxpayers and man’s best friend. Passing the PUPPERS Act is long overdue, so I won’t stop fighting until we get this done.https://t.co/vS0Fgj2hwF

Indeed, we will be here fighting until we’ve put a total end to the VA’s barbaric, taxpayer-funded dog testing program.

We are doing all we can to get us there as fast as we can.

Lara Trump’s new cause: Stop experiments on dogs at the VA https://t.co/ATyBM4ieeb pic.twitter.com/NKKgbGx5K2

More than 120 members of Congress from both sides of the aisle have joined our fight by introducing the Preventing Unkind and Painful Procedures and Experiments on Respected Species (PUPPERS) Act (HR 1155) to de-fund “maximum pain” experiments and other cruel and wasteful dog testing at the VA.

Let’s make some more big news soon, by getting the bipartisan PUPPERS Act passed into law.

Please help by writing your Congressmembers and urging them to support the PUPPERS Act to permanently cut federal funding for all painful dog experiments at the VA!

Now stop this in moral act

Stop this disgrace now. You are no better than the evil vile sociopaths of china