UPDATE December 28, 2020: The NIH’s 2021 funding bill has been signed into law. Unfortunately, greedy and heartless primate abusers tried to convince the Senate to discard the critical language and instead promote expanded taxpayer-funded monkey abuse. But thanks to pushback from WCW and Rep. Lucille Roybal-Allard (D-CA), a senior member of the NIH’s funding panel, Congress instead directed the NIH to commission an independent study by the National Academies of the NIH’s intramural primate testing and how modern alternatives can reduce their use (see page 69).You can read more about this and other WCW wins for animals and taxpayers in the government’s 2021 funding bill in our new blog!
UPDATE August 1, 2020: We have a great update! The NIH’s 2021 funding bill just passed in the full House of Representatives, with WCW-backed language in it requiring the agency to develop a plan to reduce primate experiments by 2025. Now the bill goes to the Senate. We will keep you posted on further developments!

The National Institutes of Health must cut its wasteful, cruel monkey business—and now they’re being given a timeline for doing it: It’s got to be within the next five years.

After years of pressure from White Coat Waste Project and our 2 million members, the NIH’s funding committee and now the full House Appropriations Committee have passed WCW-backed legislation telling the agency to spell out a plan for reducing its taxpayer-funded experiments on thousands of primates by 2025 (see page 135). WCW was proud to work with Waste Warrior awardee Rep. Lucille Roybal-Allard (D-CA), a senior member of the NIH’s funding panel, who drafted and secured this measure in the NIH’s 2021 spending bill.

The NIH must cut its cruel taxpayer-funded primate experiments within the next five years, thanks to @WhiteCoatWaste. https://t.co/kV70M9QoPH

This is the first time ever that Congress has given the NIH a hard deadline for curbing primate tests, which have troublingly been on the rise despite overwhelming evidence of their wastefulness. 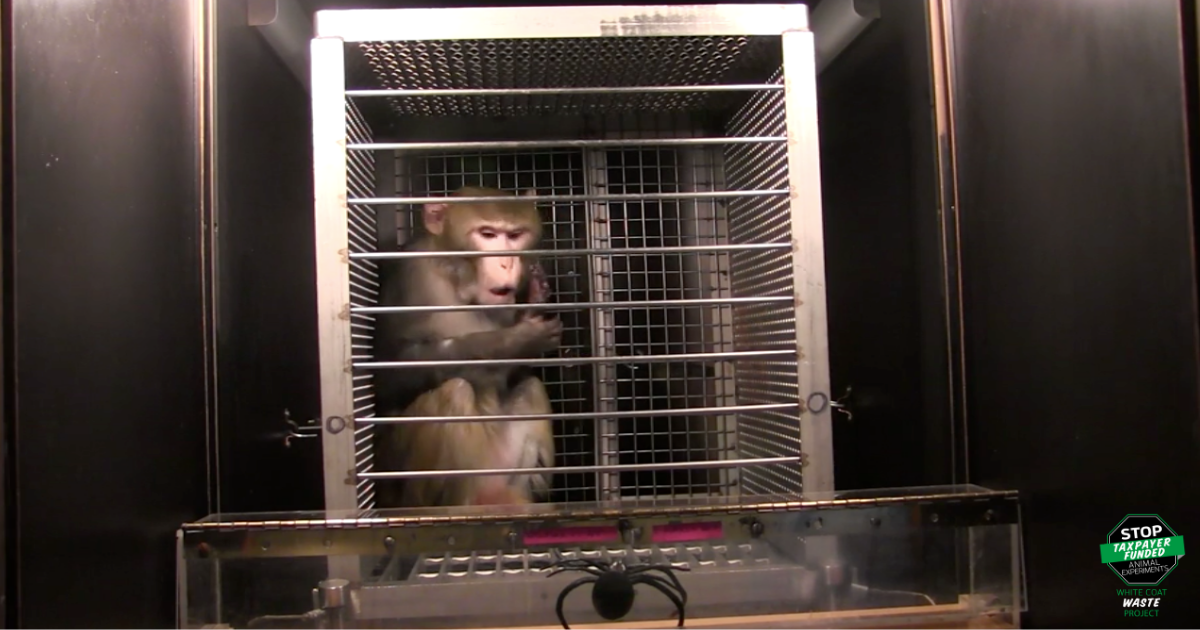 In videos obtained via a WCW lawsuit in early 2020, monkeys at NIH are given brain damage, locked in tiny cages and tormented with realistic toy snakes and spiders.

In last year’s NIH funding bill, WCW worked with Congress to include language directing the NIH to provide a report to Congress on efforts to reduce primate testing in the agency’s labs, which currently imprison and abuse over 7,000 monkeys annually.

The new spending bill for 2021 builds on last year’s language by setting a specific timeline for the agency to phase out its wasteful experiments on monkeys. 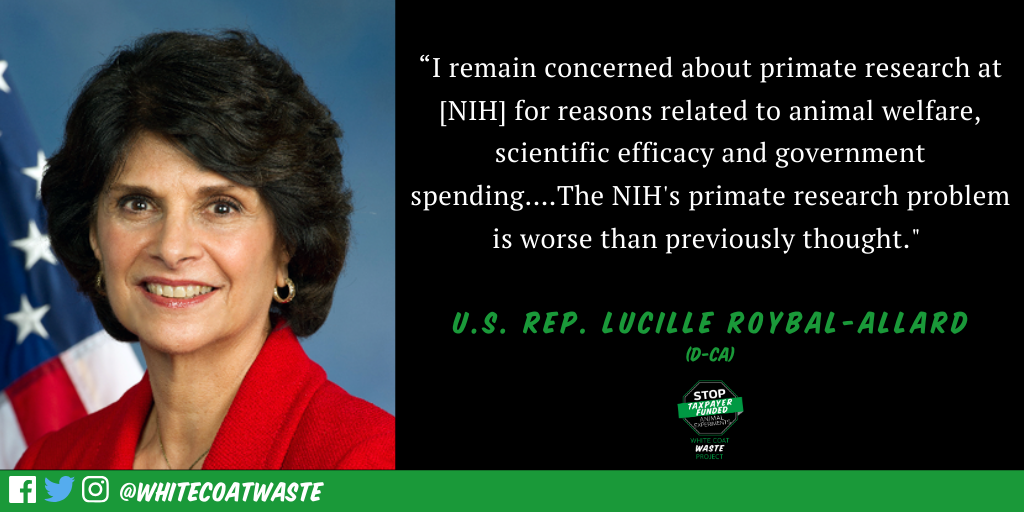 And to stop them from wasting YOUR money on cruel and useless monkey experiments like the NIH’s Fear Factory that a WCW lawsuit exposed earlier this year.

The videotaped experiments include damaging monkeys’ brains with toxic acid and subjecting them to bizarre and cruel behavioral tests. In some of the tests, monkeys are intentionally scared with fake spiders and snakes, predators they naturally fear. In others, the primates are restrained and made to watch nature documentaries and differentiate between photos of fruit and monkeys’ faces.

According to a review of federal spending conducted by WCW, these projects have been funded since the 1970s and have received nearly $100 million in tax money just since 2007. The NIH confines and experiments on over 7,000 primates each year.

For many years, Rep. Roybal-Allard has been leading a bipartisan coalition including Reps. Brendan Boyle (D-PA) and Brian Mast (R-FL) to hold NIH accountable for the abuses we revealed, which they described as “disturbing taxpayer-funded experiments” in a letter to NIH Director Francis Collins.

The NIH’s 2021 spending bill next goes to the full House Appropriations Committee for a vote, before getting voted on by the entire House. Then it goes to the Senate for approval, before being signed by the President.

We will keep you posted on developments as this important bill makes its way through the legislative process.

You can help by telling your lawmakers that you don’t want to pay for cruel and absurd monkey experiments!

Please stop all tests, save these wonderful beings!