#CutFDARedTape In The Financial Times: Testing Drugs For Humans On Dogs Makes No Sense

Opinion: The US has moved in the right direction, away from misleading and wasteful animal trials https://t.co/l86Gg1FeTw

In a fantastic new op-ed published this weekend, Lisa Kramer—professor of finance at the University of Toronto—makes a powerful case for why the FDA’s dog testing mandate should be abolished: because it’s bad for business. 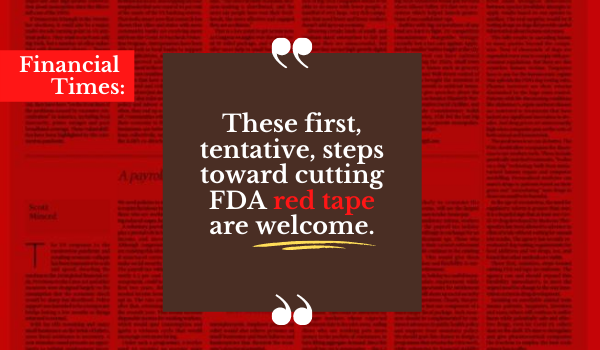 You can see the op-ed in the Financial Times’ print edition here ⬇—and read the full text below! 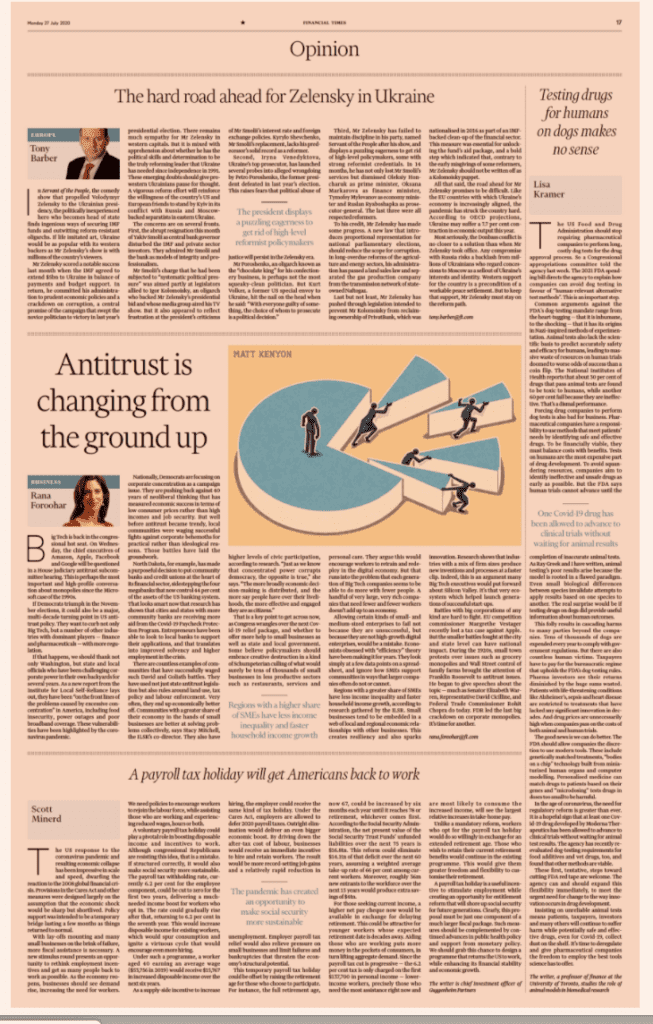 Testing drugs for humans on dogs makes no sense

The US has moved in the right direction, away from misleading and wasteful animal trials

Insisting on unreliable animal tests means patients, taxpayers, investors and many others will continue to suffer harm

The writer, a professor of finance at the University of Toronto, studies the role of animal models in biomedical research

The US Food and Drug Administration should stop requiring pharmaceutical companies to perform long, costly dog tests for the drug approval process. So a Congressional appropriations committee told the agency last week. The 2021 FDA spending bill directs the agency to explain how companies can avoid dog testing in favour of “human-relevant alternative test methods”. This is an important step. 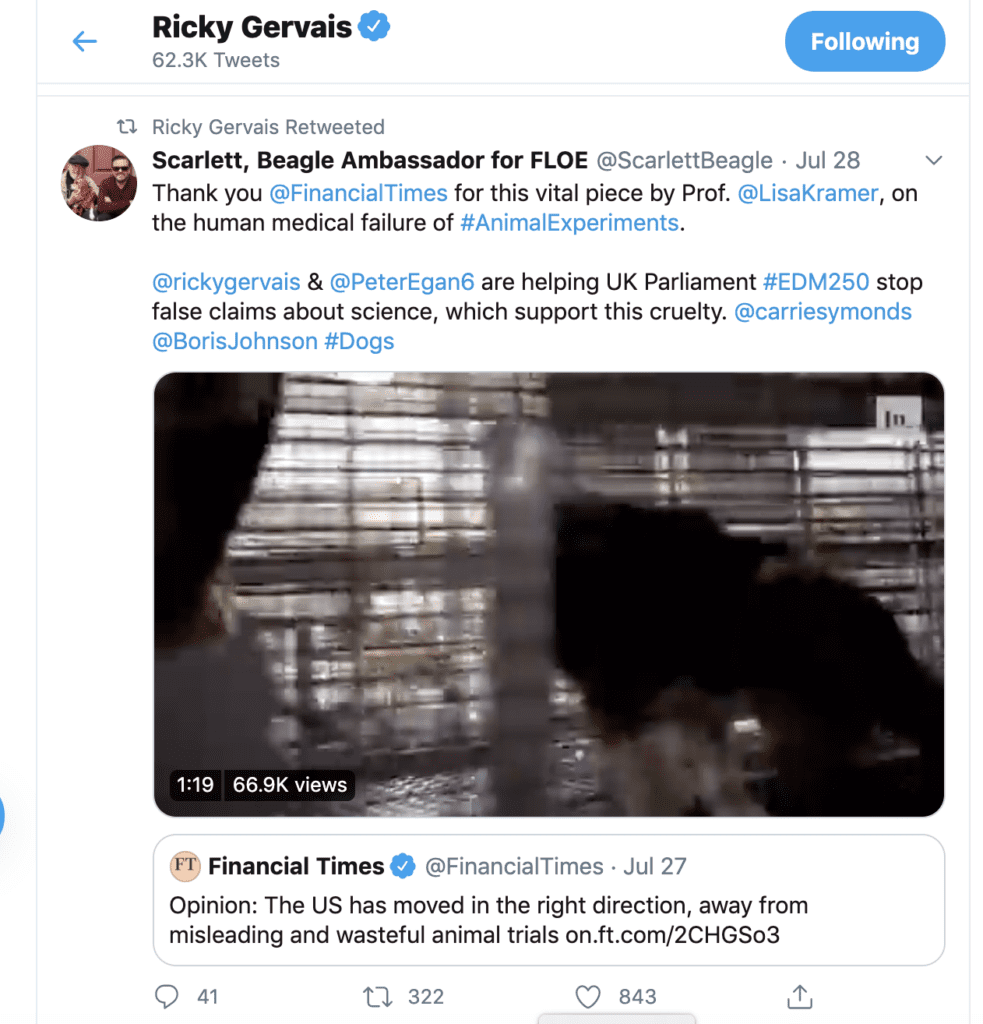 Common arguments against the FDA’s dog-testing mandate range from the heart-tugging — that it is inhumane, to the shocking — that it has its origins in Nazi-inspired methods of experimentation. Animal tests also lack the scientific basis to predict accurately safety and efficacy for humans, leading to massive waste of resources on human trials doomed to worse odds of success than a coin flip. The National Institutes of Health reports that about 30 per cent of drugs that pass animal tests are found to be toxic to humans, while another 60 per cent fail because they are ineffective. That’s a dismal performance.

Forcing drug companies to perform dog tests is also bad for business. Pharmaceutical companies have a responsibility to use methods that meet patients’ needs by identifying safe and effective drugs. To be financially viable, they must balance costs with benefits. Tests on humans are the most expensive part of drug development. To avoid squandering resources, companies aim to identify ineffective and unsafe drugs as early as possible. But the FDA says human trials cannot advance until the completion of inaccurate animal tests.

As Ray Greek and I have written, animal testing’s poor results arise because the model is rooted in a flawed paradigm. Even small biological differences between species invalidate attempts to apply results based on one species to another. The real surprise would be if testing drugs on dogs did provide useful information about human outcomes.

This folly results in cascading harms to many parties beyond the companies. Tens of thousands of dogs are expended every year to comply with government regulations. But there are also countless human victims.

Taxpayers have to pay for the bureaucratic regime that upholds the FDA’s dog-testing rules. Pharma investors see their returns diminished by the huge sums wasted. Patients with life-threatening conditions like Alzheimer’s, sepsis and heart disease are restricted to treatments that have lacked any significant innovation in decades. And drug prices are unnecessarily high when companies pass on the costs of both animal and human trials.

The good news is that we can do better. The FDA should allow companies the discretion to use modern tools. These include genetically matched treatments, “bodies on a chip” technology built from miniaturised human organs and computer modelling. Personalised medicine can match drugs to patients based on their genes and “microdosing” tests drugs in doses too small to be harmful.

In the age of coronavirus, the need for regulatory reform is greater than ever. It is a hopeful sign that at least one Covid-19 drug developed by Moderna Therapeutics has been allowed to advance to clinical trials without waiting for animal test results. The agency has recently re-evaluated dog-testing requirements for food additives and vet drugs, too, and found that other methods are viable.

These first, tentative, steps toward cutting FDA red tape are welcome. The agency can and should expand this flexibility immediately, to meet the urgent need for change to the way innovation occurs in drug development.

Insisting on unreliable animal tests means patients, taxpayers, investors and many others will continue to suffer harm while potentially safe and effective drugs, even for Covid-19, collect dust on the shelf. It’s time to deregulate and give pharmaceutical companies the freedom to employ the best tools science has to offer.

My op-ed for the FT commends the US House Appropriations Committee for directing the FDA to encourage pharma firms to favour “human-relevant alternative test methods.” As Dr. Ray Greek and I have argued, testing human drugs on animals harms patients, taxpayers, and investors. https://t.co/cD9A7yqU1b

Thank you to Professor Kramer for so persuasively arguing for regulatory reform, and to the Financial Times for publishing this terrific op-ed. (If you’re wondering about the British spelling, it’s because FT is a UK-based publication.)