🚨🚨🚨 A recent White Coat Waste Project investigation revealed the VA is torturing and killing 6-month-old kittens in secretive constipation experiments, and forcing you to pay for it—and now Congress is demanding answers. 🚨🚨🚨

The VA’s continued use of taxpayer dollars to conduct painful and invasive experiments on cats is unacceptable. These tests are unnecessary and they must come to an end. It’s time we got some answers! pic.twitter.com/p70GkaXFCO

We uncovered proof—including sickening photos, videos, and receipts—that three VA labs are buying cats at taxpayer expense, injecting fake stool up their anuses, severing their spinal cords, and removing their brains… at a cost of more than $11.1 million. 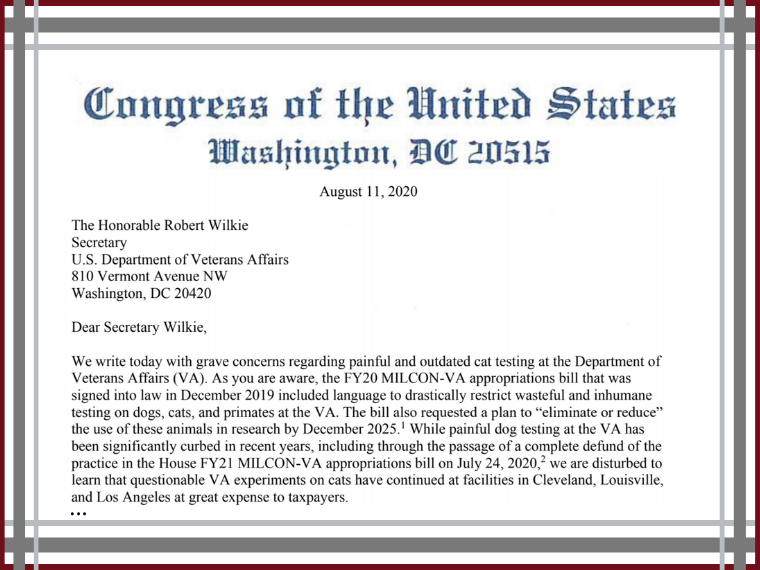 In the letter, which you can read in full here , the lawmakers cite disturbing details uncovered by WCW about the VA’s barbaric experiments—conducted at government labs in Cleveland, Louisville, and Los Angeles.

For years, the @DeptVetAffairs has used taxpayer dollars to conduct harmful tests on cats that include performing invasive surgeries on them, damaging their spinal cords, and ultimately killing them. Today @RepBrianMast and I are demanding answers about these shameful practices. pic.twitter.com/GSsrsYfWWr

The Cleveland VA has “spent at least $3.4 million in taxpayer funds since 2016” to “purchase dozens of cats, perform invasive surgeries on them, damage their spinal cords and ultimately kill them for tests related to incontinence and constipation,” the lawmakers write.

“Records show that some of these cats exhibited distress, seizures, bloody urine, and depression, and at least one was euthanized due to surgery complications.”

At the Louisville VA, cats are purposely given spinal cord injuries, placed on treadmills, “then have their spinal cords completely severed before being killed.” The Louisville VA experiments cost taxpayers $1,283,866 since 2017, and involve 80 cats. Eighty cats!

The Los Angeles VA experiments are perhaps most sickening of all…which is really saying something given the horrific nature of all these findings. There, government white coats spent a gobsmacking $5 million to implant electrodes in living cats’ brains. Then the cats “are killed and have their brains removed and dissected.”

“It’s worth noting that the LA VA ended its sleep disorder experiments on dogs in 2017 after it was determined that the tests were unnecessary and that alternatives were available,” the letter adds. 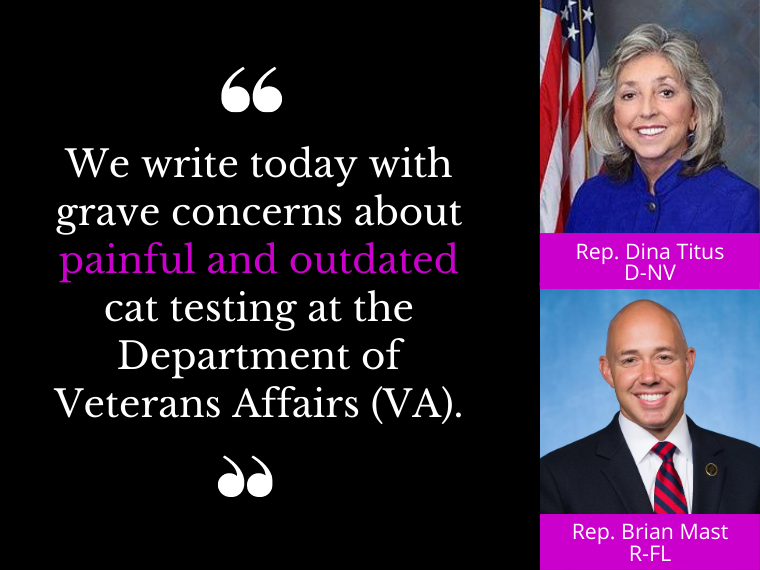 In July, the National Academies of Sciences issued a scathing WCW-led report affirming what we’ve been saying for years: the VA’s barbaric, taxpayer-funded dog testing program is wasteful, cruel, secretive, and in need of drastic reform.

As the Members of Congress write, there’s every reason to believe the VA’s failed kitten experiments also “may not be warranted.” (To put it very mildly!)

WCW already defunded the VA’s dog labs, and shut down the USDA’s “kitten slaughterhouse“ lab—which, at over $22 million and 3,000 corpses, was the largest cat abusing lab in the entire federal government.

We’ve now our sights on the VA’s kitten experiments! Together, we can and will make them stop.

Seven of the signatories are themselves veterans—Reps. Mast, Bishop, Carbajal, Panetta, DeFazio, Lieu, and Zeldin—making their commitment to this issue especially personal, and profound.

And thanks to you for your help in shutting these barbaric government labs down, as well.

Please take a moment to write and urge Congress to de-fund VA’s cat labs and make the VA adopt out the survivors!

This situation reminds me of the wild horse advocate Velma Bronn Johnston who fought to protect wild horses & burros on state & federal lands from eradication. History keeps repeating the disregard for other species right to exist undisturbed. Government must be responsive to the sovereign public & promote progressive values. Citizenship requires us to hold the gov’t accountable & transparent.

This is a disgusting way to treat another being. To cut them up and do these types of things to them, and then to out right murder them because you are done with them. That money can be used for more important things. The list is long. The animals should be allowed to live out peacefully rest of their lives, not murdered. Enough us enough of letting this stuff go on!!

This sickens and angers me. What kind of sick minds can do this to a living breathing animal? This is an outrage. They should be prosecuted for animal cruelty.

This horrific & barbaric treatment of living beings is unacceptable & must be stopped. Animals should no longer be subjected to such atrocities in the modern age especially as there are alternative means. Taxpayers money should be used to benefit society & not to fund useless, outdated & inhumane testing on innocent animals.

What are you trying to prove with these barbaric experiments?

Do these people really think citizens don’t care about cats? Are these the people in charge of our country and its expenditures? Trust me; I’ll spread the word until they are voted OUT. Here’s an easier fix: stop using taxpayers’ money to fund needless animal cruelty.
Thanks to the senators who are trying to help! You are wonderful folks who deserve our trust.

I will help stop this manslaughter of innocent animals.

Why do this to INNOCENT animals!!!! This kind of testing should be done on death row prisoners!!!!! God will judge you on how you treat his INNOCENT creatures!!!!