Hey Cleveland: Did you know your local Dept. of Veterans Affairs facility is mutilating & slaughtering kittens in a secret “catstipation” lab in YOUR city…and they’re spending more than $3.4 million taxpayer dollars to do it? 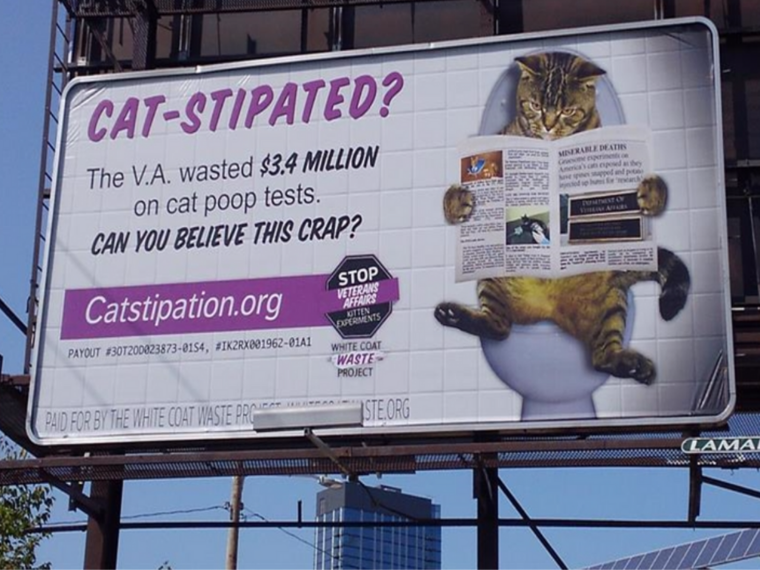 We just put up two billboards near the Cleveland VA to make sure NO ONE’s in the dark about what our investigators just discovered is happening in the VA’s cat lab—where government white coats are buying cats and kittens as young as six months old, severing the cats’ spines, injecting them with “fake poop” made of potato flour, surgically implanting remote-controlled devices to make them urinate and defecate on demand, and then killing them even though they could be adopted.

And they’re doing it all on your dime!

Holy 💩, this is really sick stuff.

We put up the billboards because taxpayers have the right to know who’s paying the bills, who’s cashing the checks…and who’s abusing animals on your dime in your community!

We have got to make this horrific boondoggle 🛑! With Cleveland’s help, we’re going to do just that.

We’ve already uncovered a lot of the disgusting details of what the VA is doing to cats with your money. But the agency’s trying to keep some records a secret, in violation of federal law. So we’ve filed a lawsuit.

Following the release of our initial investigation, powerful bipartisan members of Congress have stepped in, demanding answers and accountability.

Animal advocate Kitten Lady Hannah Shaw is lending her amazing voice. Check out this incredible video she shared with her 1.1 million followers about our efforts to end these sick and wasteful experiments, and how you can help.

Nearly 100,000 taxpayers have signed our petition telling the VA to stop butchering kittens on their dime, and to adopt out the survivors.

And the media’s taken notice. Whoo boy, have they ever!

Join the fight! Please take a moment to write and urge Congress to cut the crap, defund the VA’s kitten labs and adopt out the survivors!

This is absolutely horrible and not necessary. It’s barbaric and archaic.

You don’t have the right to waste tax payer money like this…stop testing on animals.

Your work is inhumane.

Keep letting everyone know what is really happening to these precious animals God has gave us to love.

STOP slaughtering precious puppies and kittens, young primates, bunnies and all other innocent creatures!!!! How DARE you monsters torture and kill these beautiful animals.!

It’s time to stop using taxpayers hard earned money to keep your sadistic experimenters in jobs.These abusive tests are only done to keep your medical facilities, it’s administrators, and it’s personnel working.Working at jobs that are horrifically cruel, painful, and illegal.It’s a felony to abuse an animal and every one of perpetrators of abuse against these helpless and voiceless cats deserve to be imprisoned.

it is time to stop these abusive experiments. make no mistake—its a felony and illegal to abuse any animal. all of you people deserve prison time. what you do is inhumane. free all animals and get them fixed up, then let them go to a good home. they deserve a good life. stop the torture and killing now. close up shop forever.