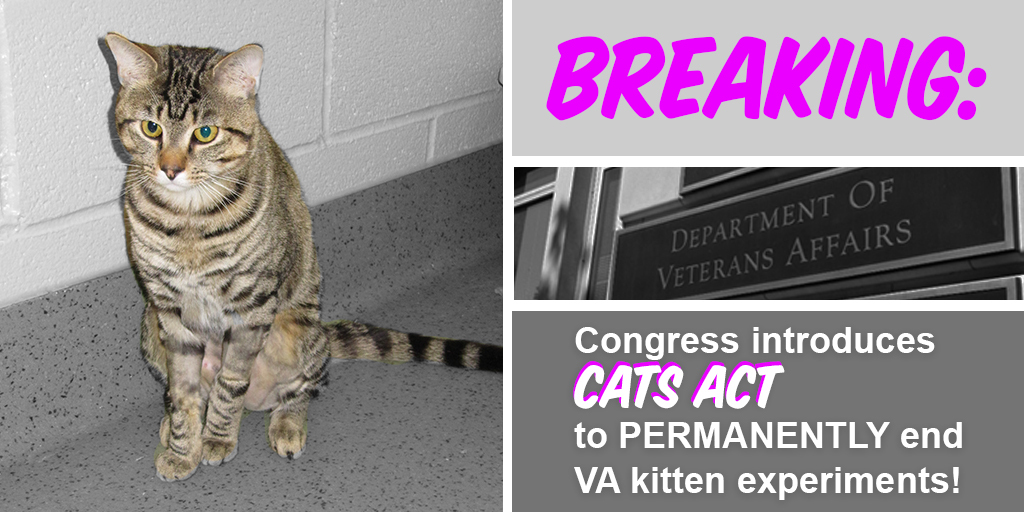 “The Veterans Administration is doing things to cats that would land an individual in jail, and you’re paying for it.” –Nevada Current (8/13/20)

🚨 Well, they sure won’t be doing it much longer, if a new bipartisan WCW-backed bill becomes law!🚨

In other words: If this bill is enacted, the VA can’t keep purchasing, maiming, killing, and dissecting kittens and cats on your dime.

💥 Done. All over. No more.💥 Here’s what bill co-lead Rep. Mast said about the bill this morning:


Here’s why this bill is so urgently needed. Earlier this year, WCW uncovered proof that government white coats are using your tax money for purchasing, crippling, and killing dozens of healthy 6-month-old kittens and other cats in three secretive Department of Veterans Affairs cat labs in Cleveland, Louisville, and Los Angeles. We’ve even had to sue the VA for violating federal law by refusing to release related documents.

You don’t have to be a cat owner like I am to recognize that these practices are cruel. It’s time that we stop unnecessary and inhumane testing on kittens at the VA.https://t.co/CWGtlVR04L

As we explained in a blog on Alicia Silverstone’s website The Kind Life: Some kittens have “fake poop” shoved into their anuses. Some have remote control devices inserted into their bladders to make them urinate on demand. Others have holes drilled into their skulls, before their brains are removed. All the cats and kittens are killed at the end of their experiments.

These kittens need our help and we are paying for the harm… find out what you can do to help. 😿 #TheKindLife https://t.co/RBN901uSuE

WCW put up billboards near the Cleveland VA to expose its wasteful “catstipation” experiments to VA employees, staff, and other taxpayers who live near the laboratory. 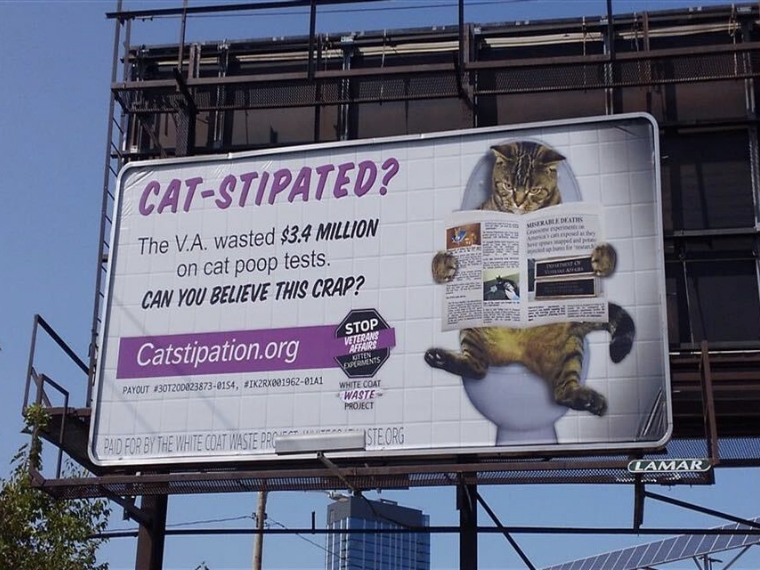 A photo of one of the billboards White Coat Waste Project put up near the Cleveland VA targeting wasteful taxpayer-funded kitten constipation experiments.

Our investigation this summer prompted 30 bipartisan members of Congress—led again by Reps. Titus and Mast—to send a letter to VA Secretary Robert Wilkie expressing their “grave concerns about painful and outdated cat testing at the Department of Veterans Affairs.” With the VA failing to provide any satisfactory resolution or answers, that action was followed by the CATS Act’s introduction today.

A bipartisan bill called the CATS Act was introduced in Congress by @repdinatitus and @RepBrianMast to end taxpayer-funded tests on kittens and cats. @WhiteCoatWaste https://t.co/yFsq16mZvi

A silver lining of spending so much time at home is that I’ve finally figured out what my #cat does all day. Can’t imagine this difficult time without our furry friends.

Proud to cosponsor the #CATSAct to end the VA’s lab experiments on kittens & cats. #AnimalWelfare pic.twitter.com/KiZlxzp1YO

This is an unquestionably popular measure. A national poll of 1,000 people last month found that nearly three-quarters want to cut funding for the VA’s kitten abuse. More than 170,000 WCW advocates have signed our petition demanding the VA stop its wasteful, cruel, and extremely disturbing kitten experiments and adopt out the survivors with more adding their names every single day.

The CATS Act also builds on work we’ve been doing with Congress to stop the VA’s taxpayer-funded animal experiments. Following WCW’s years-long campaign, the VA’s dog testing is at the lowest point in history and this summer the House voted to completely defund painful dog testing at the VA. And in December 2019, WCW-backed legislation was enacted directing the VA to phase out testing on cats, dogs, and monkeys by 2025.

Push to end abusive cat testing at the VA https://t.co/f07iXGlTSH

Last year we shut down the biggest cat lab in the whole federal government: the USDA’s notorious “kitten slaughterhouse” lab.

Now let’s do it again and send the VA’s cruel and wasteful cat experiments to the litter box of history.

Join the fight: Please take a moment to write and urge Congress to pass the CATS Act and defund the VA’s kitten labs!

Please do the right things for the cats!

When will humans learn kindness. This is sickening. Please stop the cruelty of all animals.

Shame on me for losing sight of these continuing, atrocious pointless experimentations.
I was better informed and conscious of these types of barbaric practices some years ago.
Thank you for pointing out to me that they continue and people like me better get active and help stop the cruelty.

It’s doubtful these experiments serve any purpose other than keeping government budgets expanded. I do not want my tax money spent on it. We should have a national database which tracks animal experimentation, both civil and governmental, to prevent unnecessary duplication, frivolous experiments, poor management and abuse…all of which occur at the at the expense of defenseless animals.

This demonstrates how much bad faith there is in applying the laws in the executive branch of government. Character matters in all federal appointments. Selective enforcement is a violation of the oath of office these officials take.