VIDEO: A 2nd Compromised WHO “Investigator” Admits Labs in China Are Manipulating Coronaviruses

“If the Wuhan institute were found to be the source of COVID, it could threaten the credibility and funding of virology labs such as Koopmans’s.” — The Washington Post, March 22, 2021

There’s a reason you don’t put foxes in charge of the henhouse, and it’s the same reason why it’s utterly bonkers for the WHO to rely on COI-riddled investigators to get to the bottom of the pandemic’s origin.

As WCW first exposed, WHO “investigator” Peter Daszak—who secretively shipped U.S. tax dollars to the Wuhan Animal lab to supercharge coronaviruses—is one big cause for concern and closer scrutiny.

But, there’s also a second compromised WHO “investigator”–Marion Koopmans-– who has suspiciously downplayed the possibility COVID-19 leaked from the Wuhan Animal Lab, too! She has been directly involved in risky and cruel animal experiments funded by tens of millions of U.S. taxpayer dollars at Erasmus University Medical Center in the Netherlands.

“We are now looking whether we can change those viruses,” Koopmans says in this February 2020 interview uncovered by WCW investigators. “Can we add this virus to it, or can we adjust those viruses to include this one. This is actively happening in a few places worldwide, also in China.” 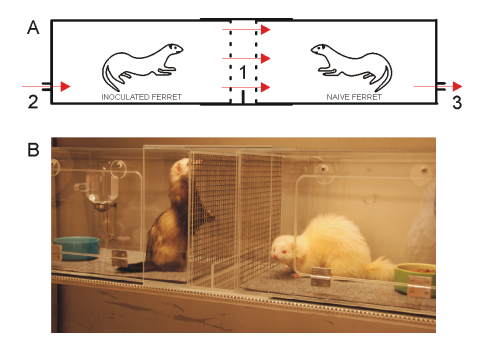 Koopmans’ own experiments, including those paid for with your taxpayer dollars, involve supercharging swine flu to make it deadlier and more contagious, infecting ferrets, mice, and guinea pigs with the new virus strains.

Koopmans has also received funding from the Chinese government, whose obfuscation was called out by the Biden administration (and others) as standing in the way of getting to the bottom of COVID-19’s origins.

In fact, the Biden White House specifically said it could not rule out the possibility of COVID having leaked from the Wuhan Animal Lab, because of the Chinese government’s lack of transparency.

“Perhaps the WHO final report will supply evidence to justify the investigators’ apparent lack of interest in pursuing the lab-leak theory. Does the WHO have the names of the lab researchers who fell ill? Were they interviewed?” https://t.co/k31SfPEzMu

In a Washington Post column, David Feith, the former U.S. Deputy Assistant Secretary of State for East Asian and Pacific Affairs, explains why Koopmans has a vested interest in dismissing the lab leak hypothesis:

Koopmans, by the way, has been associated with and now oversees a Dutch lab that in 2011 caused an international uproar over risky “gain of function” virology experiments that made a deadly influenza virus more transmissible among ferrets and possibly therefore among humans. (Ferrets and humans have similar respiratory biology.) This led scientists and governments worldwide, including the Obama administration, to favor limits on lab experiments involving potential pandemic pathogens, as they are called.

This is precisely the sort of risky work that the Wuhan Institute of Virology specialized in — carried out in the very labs where researchers fell sick in fall 2019. If the Wuhan institute were found to be the source of covid, it could threaten the credibility and funding of virology labs such as Koopmans’s.

The Wall Street Journal is among the other publications also calling out Koopmans’ inclusion as a WHO investigator, given her obvious conflicts of interests:

If an investigation finds it likely that the Covid-19 pandemic was caused by gain-of-function research, that would have repercussions for labs around the world, including at Erasmus MC,” the WSJ editorial board wrote. Erasmus MC is Erasmus University Medical Center—which, again, is Koopmans’ animal lab.

In other words: Her funding, including the millions of U.S. taxpayer dollars the NIH has been throwing her way, is at risk if it’s found that these career-making animal experiments caused the COVID-19 pandemic.

And yet she’s the one charged with doing the investigation into COVID’s origins, along with this guy!?👇🏼

The lab-leak hypothesis is becoming impossible to ignore. Peter Daszak–closely tied to the labs doing Gain of Function work on Corona viruses–is now a WHO inspector on the team investigating COVID origins in China.

What’s that again about foxes and henhouses?

Do not fund the Wuhan lab 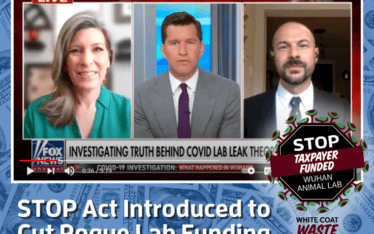 This New Senate Bill Would STOP Payouts to Rogue Animal Labs
🎶 STOP, in the name of waste 🎶 A new Senate bill introduced by Waste Warrior Sen. Joni Ernst (R-IA) would cut payouts to any taxpayer-funded grantees that violate federal...
4 LikesLeave a comment

Waste Of The Week: W.O.W., White Coats Admit It’s Pointless Getting Rats Hooked On Drugs, Still Take Your $ To Do It!
This edition of Waste of the Week is called RATTING ON THEMSELVES. In which we share a new paper whose authors admit that it is pointless to hook rats on...
18 LikesLeave a comment