WCW Investigation: The Wuhan Lab Does Awful Things with Your Tax $…to ANIMALS!

Whether or not the COVID-19 pandemic actually sprung from a lab leak at the Wuhan Lab, here’s one thing we know for sure:

This lab is HORRIBLE to animals! 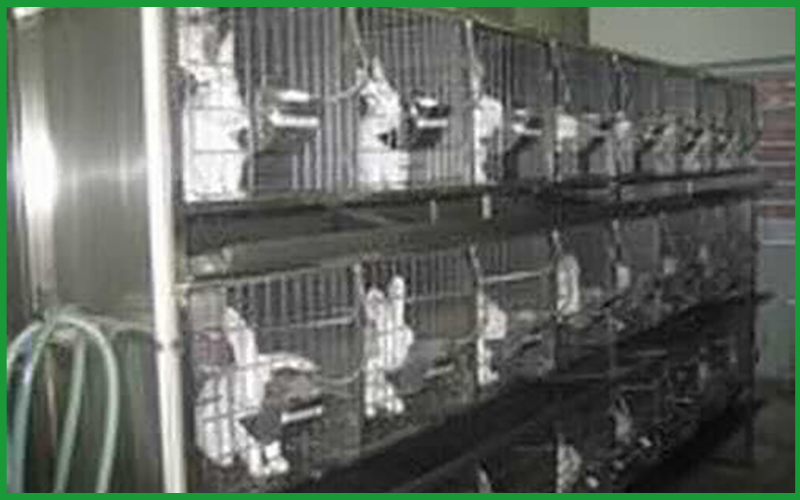 Exhibit A: this is an actual photo from inside the Wuhan Animal Lab.

And it’s a gargantuan torture chamber.

According to an archived version of its website, the Wuhan Lab covers 1,216 square meters with “126 cages for Japanese white rabbits, 340 cages for SD and Wistar rats, 3268 cages for… genetically engineered mice, 12 cages for ferrets, 12 cages for bats… totaling 52 subspecies.”

At least that’s what it admits to.

The U.S. State Department reports it “engaged in classified research, including laboratory animal experiments, on behalf of the Chinese military since at least 2017.”

Bat Woman “earned” her nickname for a very good reason.

She rounds up and traps coronavirus-infected bats in the wild… then transports the victims to the Wuhan Lab. 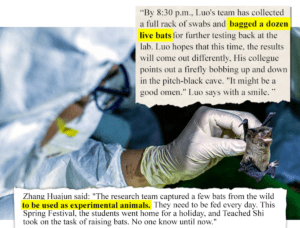 Exhibit B: The Wuhan Animal Lab’s greedy white coats have no shame. Their M.O.? Bag and brag.

These poor wild bats even have holes punched in their wings for “barcoding” and lab ID purposes.

Snatched out of a copper mine. Stuffed in a cheap sack. Restrained against her will. Locked in this cage.

Imagine her awful life. Can you think of a worse fate for a wild animal? 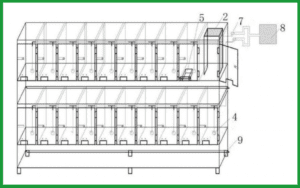 As Exhibit D illustrates, Wuhan white coats film themselves injecting viruses into the brains of small mammals, using a pipette through what they actually describe as a “skull window.” 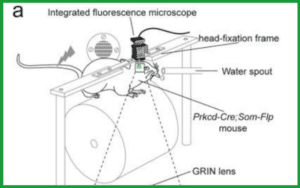 Exhibit D: The victims are deprived of water, restrained, electroshocked, and deliberately scared with loud noises in fear experiments.

A restraint device is implanted onto the victim’s skull. Metal bars restrain her head in a vise.

Then she’s tormented by an electroshock generator. It repeatedly delivers painful bursts of electricity to her feet.

She’s even deprived of water (for 23 hours each day!) to make her cooperate in exchange for a sip.

Come to think of it, that’s not even an appropriate description. You see, the Wuhan Lab was actually paid for by YOUR AMERICAN TAX DOLLARS! 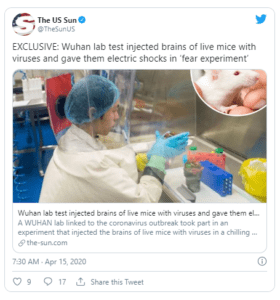 White Coat Waste Project was the first to expose this government scandal to the international media, in which part of a $3.7 million NIH grant funded this horrific cruelty. You paid the bill (payout #R01AI110964).

HEY BIG SPENDER! That’s not even all you racked up on your Wuhan tab.

Check out this cartoon. Cute, right?

The Wuhan Lab intentionally infects these monkeys with COVID-19.

It injects them, probes them, and slaughters them… then harvests their organs. 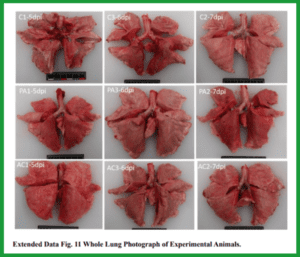 The Wuhan Lab rips three-day-old piglets away from their mom for cannibalism experiments. Without a mother’s care, the babies stop growing. Some don’t make it at all.

The “lucky” survivors are forced to eat the ground-up intestines of other coronavirus-infected baby pigs just to see what happens. Surprise: horrible deaths happen.

The Wuhan Lab also kills Chinese tree shrews (close relatives to primates). It cuts off their skin and conducts herpes experiments with “minced” samples removed from the shrews’ inner thighs and groins.

Oh. The Wuhan Lab poisons and slaughters beagle puppies, too. 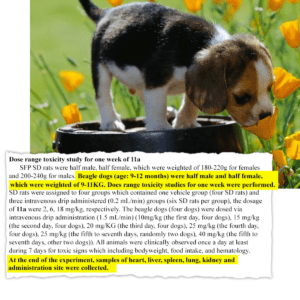 Exhibit F: we rest our case.

“Did taxpayer-funded animal experiments cause the worst catastrophe of our time? It’s increasingly plausible and we need to take steps to ensure it doesn’t happen again.”

Bottom line: even if the Wuhan Lab is innocent of starting the pandemic, it’s GUILTY of taxpayer-funded torture.

But is this how you want your money spent? We doubt it.

Appalling; so hard to wrap ur brain around. This virus that has killed almost a million people….came from Wuhan and this horrible torture is continuing. It seems that Wuhan lacks any kind of consciousness; soul or regard for life.

They’re cruelty must be exposed on a grand scale!!

They’re cruelty must be exposed on a grand scale!

Stop the cruelty! This is not science!

Awful. Fauci should be put down.

Horrible, inhumane. Nothing good coming out of this

So horrific that these torturous tests are still being allowed! This MUST stop NOW!!

I do not believe the Wuhan lab is innocent of perpetrating COVID19 and they certainly are not innocent of committing horrific crimes against thousands of animals. What they do is non-science nonsense. The fact that the NIH is pumping our tax dollars into this huge fraud is mind-boggling and entirely unacceptable. Every one of us who is appalled and offended by these useless atrocities would do well to hound your Congresspeople and demand action to cut off all $$$$$$ to this dangerous, evil lab.

Find willing humans. Leave animals out of it. They don’t deserve such horror. Sickening

HOW IS BARBARIC TREATMENT STILL HAPPENING??? THIS IS ABSOLUTELY HORRIFIC!!!

This cruel and insane Lab and all of its monster people MUST BE stopped dead in their shady tracks!! I don’t trust them!!

WHY ARE PUR DOLLARS USED TO FIND THIS? WHO AUTNORIZED THIS? NAMES ARE NEEDED.

We need to hold them accountable. Stop the animal testing and focus more on computational biology and data mining. We don’t want science at the expense of animal cruelty. Their methodology is barbaric, unnecessary, and condemnable.

SHUT THIS FILTHY COVID HELL HOLE DOWN!! THIS IS A HORRIFIC, TORTURING, DUNGEON!!! NO MORE OF THIS!!! YOU SCUMBAGS!! YOU IDIOTS MAKE ME SICK!!!

Disturbing in many ways. Disturbing that it happens. Disturbing that some people, which same said people can be found all over the world, enjoy inflicting pain. It’s illegal to inflicting pain on humans but a loop hole makes it legal to inflict pain on animals in RESEARCH LABS. If it’s illegal to inflict pain on animals in my home, animal abuse, then how come in RESEARCH LABS It’s legal????
It’s not even legit research. It’s pissing my tax dollars away, And the US knows it’s wrong in many ways, otherwise we wouldn’t be paying so called ‘labs’ in other countries to piss away my tax dollars.

I do not want my tax dollars used to inflict pain and kill innocent animals in the Wuhan lab for this futile research!

This heinous funding of animal torture with our money is deplorable, and you have been the force to stop
It! Thank you!

This is pure and evil animal torture. Until humans stop their negative relationship with animals and nature, things will continue to get worse and worse on this planet for all of us. No excuse for animal abuse!

I hope anyone who participated dies a painful death asap!!!!!

There’s no need for animal testing. This is animal cruelty. Stop the killing.

Awful. Stop this now! No reason for such a thing. Be ashamed of yourselves!

Why does the United States fund a lab aka torture chamber in China?

STOP all this pain

Horrid. Can’t believe this is happening in USA. Must stop now!!!

This horrific act must stop. When Human performs cruel experiments on animals , COVID happens. I wish these people goes through same what they are doing with animals . Law makers must pass a strict law against laboratory experiments on animals. In this modern world, we shouldn’t exploit animals to find cure of human pain. We will never be succeeded in our goal if we continue hurting other species. Human must understand that this planet belongs to animals and birds , we are just a visitors.