This is a WCW-backed bill that no one should oppose (and recent polling shows basically no one does). Following WCW’s campaign, the U.S Senate just reintroduced the AFTER Act, also known as Violet’s Law, to make lab animal adoption an option … across the entire federal government!

In animal news: There’s a new bipartisan effort to ensure that retired, healthy lab animals have a chance at being placed in a loving home rather than being killed. @SenatorCollins @GaryPeters @WhiteCoatWaste cc @darth pic.twitter.com/alUn3K7Z97

The AFTER Act was introduced to ensure that all federal agencies have policies in place to facilitate the relocation of healthy, retired lab animalshttps://t.co/Unni6mjZ2x

This is a B.F.D. You see, government white coats usually kill survivors—even healthy and adoptable ones—rather than let taxpayers adopt them, or retire them to sanctuaries. It’s just more convenient. 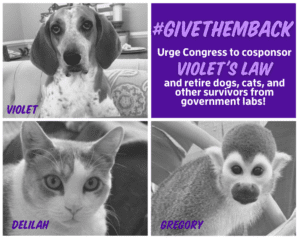 Survivors released from taxpayer-funded labs following WCW efforts (L-R): Violet was rescued from a lab by a WCW board member. Delilah was retired by the USDA when WCW shut down its Kitten Slaughterhouse. And Gregory is one of 26 monkeys who WCW got released from the FDA’s now-defunct nicotine lab.

Lab animals that are suitable for adoption or retirement should never be killed by federal agencies. @SenGaryPeters & I introduced a bill that provides the direction agencies need to help ensure these animals are placed in loving homes or sanctuaries.https://t.co/uNbqFOsf75

Happy #NationalKittenDay! I believe all animals deserve a happy, loving home. That’s why I’m a proud cosponsor of the AFTER Act, which would ensure kittens and other animals previously used for experiments in government labs have a chance at adoption.

There’s another name for the bill, too: Violet’s Law.  Named for the rescued ex-lab dog who inspired it, and who inspires us. 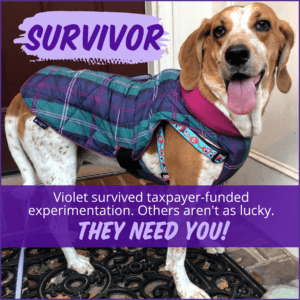 In January, we got the Environmental Protection Agency to commit to retiring rabbits who survive experimentation. We’ve saved 26 squirrel monkeys from the Food and Drug Administration’s $5.5 million nicotine addiction studies, who now live at a primate sanctuary in Florida, and the survivors of the USDA’s $22 million  “Kitten Slaughterhouse” lab, after we got that hellhole shut down.

Almost all of the animals who survive cruel lab experiments are killed, even when they are healthy enough to live happy lives in loving homes or sanctuaries. However, new legislation could help put an end to thishttps://t.co/f63m6mgJsE

We’ve also secured the first-ever agency-wide commitments to retire and release lab survivors at the:

But, as we wrote in our recent op-ed published in USA Today:

A supermajority of taxpayers want Violet’s Law to become the law of the land with 71 percent of Democrats and 72 of Republicans telling Lincoln Park Strategies they want retirement, not death, for animals who survive experiments in government labs.

We say animals who survive government labs deserve a second chance, but in a way that’s a misnomer. They haven’t really even gotten a first chance. At least not yet.

These cats, dogs, monkeys, and other animals deserve better than to survive a government lab only to be killed. They deserve retirement; they deserve sanctuaries and loving homes. Not a life of abuse, then a shot of pentobarbital.

“Violet’s Law is the most important public policy of its kind. It would make lab survivor retirement of cats, dogs, monkeys and other federally regulated animals standard across the whole federal government.” #GiveThemBack https://t.co/37uXlRrl2j

And you deserve better, too.

ABC7 investigative reporter Scott Taylor was instrumental in helping White Coat Waste Project expose and shut down the USDA’s kitten slaughterhouse. Along with Washington, DC’s ABC7 he helped spread the word about Violet’s Law (aka the AFTER Act), and why it’s needed to spare the lives of over 50,000 dogs, cats, primates, rabbits and other animals locked in government laboratories.

Watch ABC 7’s outstanding new investigation that featured Violet’s journey from a lab dog to a lap dog and how WCW is working with Congressman Brendan Boyle (D-PA) and other lawmakers to pass a common-sense bill that would open the doors to retirement for animals across government laboratories:

Taxpayers paid for these animals. We should have a say in their fates. We say those fates should be good.

Let’s get this done ! https://t.co/DoxlybUeJu

Please help us make the government give them back by urging your Congress members to cosponsor Violet’s Law to provide a second chance to animals abused in wasteful government experiments!

As far as i’m concern these people who do that to Animals are sick people , they are animals
Abusers with no hearts !