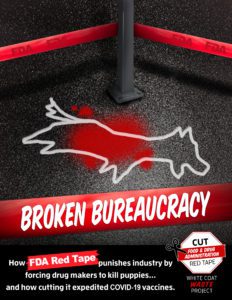 A beagle puppy’s mouth is taped shut to prevent her from spitting out an experimental drug. Chemicals are forced through a tube into her stomach or injected into her eyes. Some are only one week old. 20,000 dogs killed each year. No pain relief. No anesthesia.

Now here’s the real scandal: drug companies don’t want to do any of this. They prefer newer, cheaper, faster, and more accurate technology— but the Food and Drug Administration remains entrenched in regulations from nearly a century ago, and its heavy-handed bureaucrats punish industry for challenging its dog testing red tape.

White Coat Waste Project’s landmark new report, BROKEN BUREAUCRACY, is a first-of-its-kind analysis of how thousands of puppies are abused in wasteful, misleading, and expensive drug tests just to satisfy archaic FDA red tape… and how puppies, patients, in addition to drug makers’ own profits, are the victims.

As first reported by The Daily Caller, in this investigation, we analyzed some 200 new drug applications (NDAs) submitted to the FDA by pharmaceutical companies over the last 20 years.

These NDAs are important because they describe, in the industry’s own words, what FDA forces them to do for regulatory approval — whether they like it or not. 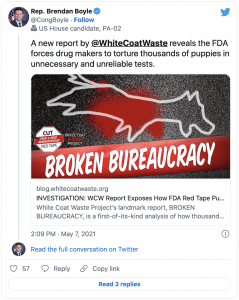 Here’s a small sample of what our investigation reveals:

These dog tests are stunningly expensive (up to $900,000 each!) and unreliable (even according to government scientists themselves), while more efficient, effective, and dog-friendly test methods exist—all this is detailed in our report, too.

And indeed, the proof’s in the pudding: Moderna and Pfizer’s COVID-19 vaccines were rapidly developed and fast-tracked through the FDA’s normal animal-testing mandate, to great success!

Polling shows a supermajority of taxpayers from both parties say the FDA should cut red tape. WCW has rallied Congress to push regulatory relief across party lines. 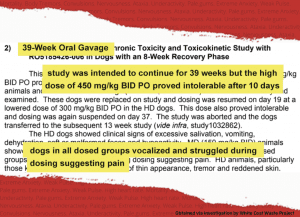 No voice. No choice. FDA red tape ties the industry’s hands and tapes puppies’ mouths shut.
To get treatments to market faster, cheaper, with fewer dead dogs, and without delay, we don’t just need to cut FDA red tape … we need to SLASH it!

The system is sick. We have the cure. Please read BROKEN BUREAUCRACY. Then lend your voice to help us cut FDA red tape by telling Congress to pass the AARF Act!

FDA is cruel & pathetic in using defenseless puppies for unnecessary experiments, they are mad scientist. Why don’t they volunteer instead. All FDA members will be accountable on Judgment day before Gods’ Throne of Grace.

This is horrible and has to be stopped ✋

These bastards at the FDA are antiquated fossils themselves stuck in a world that doesn’t exist anymore in their own bureaucracy of stupidity. Stop these cool experiments that do nothing but waste taxpayers money when it could be used so many other better places. I strongly suggest you submit these bureaucrats to the tests instead of the dogs and animals they truly punish. Let them have a taste of it permanently.

As a person with a college degree who passed several college level chemistry classes, I feel there is no need to continue these barbaric actions. Scientists already know what substances are poisonous, toxic, and even deadly therefore mixing and concocting several together doesn’t make the new substances healthy.

Please. Stop the atrocity and killing of these puppies.

All of this has to stop yesterday!!

People who torture and kill helpless animals are going to burn in hell.

This uneccessary torture of animals HAS TO STOP! There are better, more efficient ways to test drug safety. If an individual were to be caught treating an animal the way these poor animals are treated, they would be jailed. It is torture, plain and simple. Torture.

FDA has a horrible reputation and this all confirms that. Stop this insanity and leave animals out of your damned experiments. This is cruel and totally unacceptable. I hope they take you and your experiments to the cleaners
with animal cruelty lawsuits galore.

This is ridiculous. This is a waste of money and dogs. I can’t believe people could even be paid to do this.

This needs to change.

Unfund the archaic FDA. They’re Sick monsters, especially when it’s proven that the disgusting experiments don’t garner any results that can be used.

This is horrific and has to stop!!! Animals DO NOT DESERVE treatment like this!!! They are being held captive against their will. If you need studies pay volunteers because someone is stupid enough to do it for money!! Leave animals alone!! IMMEDIATELY!!

STOP…. STOP…. STOP This cruelty….use the new alternatives available that do NoT require animals!!!!!

Pls do NOT continue this horrible, inhumane practise !!!!!!!

Special place in HELL for those that do this

An horrified that bureaucrats are inhumane when still follow this GOD forsaken evil treatment
concerning these tiny, helpless puppies and for the asswipes who breed and supply these pups to these live animal labs, well they should get the needle as well. This cannot continue. STOP THESE BREEDERS and THE PERSON WHO REQUESTS TINY LIVE PUPPERS. STOP IT NOW.

How very cruel & just babies. They all suffer due to humans. There must be another way.

Such cruel, inhumane and unnecessary treatment of such sweet babies that do not deserve it!!!!

How horrible. Makes me cry to think of how dogs suffer for no reason

PLEASE stop this inhumane suffering NOW!!! We now all know animal testing is no longer necessary or wanted!! Continuing this practice when it’s no longer needed, just proves that there must be money involved and/or all of you are just heartless to keep doing this to innocent animals!!STOP this torture now! Please.

PLEASE, stop abusing innocent animals! They were NOT created to be used this way! They feel pain and have
emotions like people do and don’t want to hurt. If you have any heart at all for living beings, please stop this!

STOP THE CRUELTY. Animal testing is no longer necessary.

Please stop this inhuman treatment to animals. Their are other ways to test. STOP THE CRUELTY 😢

STORM THE USDA TELL THEM THIS MUST STOP

This needs to stop. This is nothing more than animal abuse. We learn absolutely NOTHING from these tests that cannot be found out through other means that do nothing involve animals. If these idiots feel this is so necessary then why don’t THEY take these drugs. Yeah. I didn’t think so. They just get off on torturing and killing these animals. It needs to STOP 🛑 NOW!!!