Unless you’ve been living under a rock, you know that for over a year—since we first exposed and cut secretive U.S. taxpayer funding for dangerous coronavirus animal experiments at the Wuhan Institute of Virology—WCW been working to permanently defund the Wuhan animal lab, where many experts believe COVID-19 may have leaked from.

“Did taxpayer-funded animal experiments cause the worst catastrophe of our time? It’s increasingly plausible and we need to take steps to ensure it doesn’t happen again.”

The U.S. Senate advanced legislation that would prohibit taxpayer funding for state-run labs in China as well as for gain-of-function experimentation in China. https://t.co/OES99Xlfcf

Last night, the Senate unanimously approved two measures for inclusion in the bipartisan Endless Frontier Act (aka the U. S. Innovation and Competition Act) that crack down on this crazy spending.

Today, the Senate unanimously agreed with me that not another dime of taxpayer dollars should be spent subsidizing Communist China’s state-run Wuhan Institute of Virology. 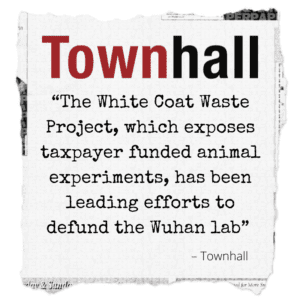 “No taxpayer money should have ever been used to fund gain-of-function research in Wuhan, and now we permanently have put it to a stop.” pic.twitter.com/dyHz24h3dN

Today, the U.S. Senate passed my amendment that would permanently ban all funding of gain-of-function research in China. https://t.co/DJaNqIrgDa

These are the risky experiments that were taking place in Wuhan in which coronaviruses and other pathogens are supercharged and injected into animals to make them deadlier and more contagious to humans. We’ve been calling for them to be defunded since early this year.

Capitol Hill, media & @GOP are abuzz now thx to the @RandPaul & Dr Fauci debate. But @JustinRGoodman from @WhiteCoatWaste told @kdkaradioamnews about this in April 2020. https://t.co/kHXGhD48hb

SENATE: The Senate chamber erupts into cheers after an amendment proposed by @RandPaul that bans US funding of gain-of-function research in China is passed by unanimous voice vote pic.twitter.com/8fQ6hAWpuW

We’ll keep you posted as this legislation works its way to the President’s desk.  In the meantime, urge your member of the House of Representatives to defund the Wuhan animal lab!

Waiting for a day where science no longer requires torture and violence! Stop wasting our tax dollars on torturing animals!

NOW….WE NEED TO GET TO WORK ON STOPPING THE BSL4 LAB BEING BUILT IN MANHATTAN KANSAS WHERE THEY WILL BE DOING THE SAME KIND OF DANGEROUS RESEARCH

Stop the torture…innocent and defenseless animals have suffered long enough…NO MORE!!! This is 2021 for goodness sake…WAKE UP…speciesism has no place in today’s society!!!!!!! Just stop…NOW!!!!

Foul-Chi is a Globalist and the key to the entire Globalist world wide Covid Coup Fraud. Why is he still in any position with such an appalling record in many negative areas of operations. Feels like the Globalist are already running the show and keeping him safe as the Big Guys right hand man.

This is horrific and must be stopped immediately! We have to fight for better laws to protect our animals and for real punishments for abusers!