Do you want your tax dollars spent on Frankenstein experiments that create hybrids of humans and other animals? HELL NO.

Ruthless white coats from the U.S., China and Spain recently created monkey-human hybrids (aka “chimeras”) in which human stem cells were injected into monkey embryos, which survived for as long as 19 days. Other disturbing hybrid experiments have merged cells from pigs and humans, cows and humans and rats and mice.

Vivisectors want to ramp up these sickening and wasteful studies and even attempt to bring these hybrid embryos to full term to see what happens.

We shouldn’t need to clarify in law that creating animal-human hybrids is ethically unthinkable, but sadly not all of my colleagues agree. Currently NIH does not do this research. It should be kept that way.

Since 2015, the National Institutes of Health (NIH) has rightfully defunded human-animal hybrid experiments on account of “ethical issues” and “animal welfare concerns.” Now, it appears that the NIH may lift its funding ban, and our friends in Congress are taking action to stop that from happening.

Last night my amendment with @SteveDaines and @SenatorLankford to ban animal-human hybrid “chimera” research received a vote on the Senate floor.

2020 Waste Warrior awardee Senator Mike Braun (R-IN) and Rep. Chris Smith (R-NJ) have just introduced a bill in the House and Senate to permanently prohibit taxpayer funding for human-animal hybrid experiments.  We’re proud to be among the groups endorsing this important legislation.

Braun and Smith also led a letter signed by 30 other lawmakers urging the NIH to keep its prohibition on taxpayer-funded hybrid animal experiments intact. 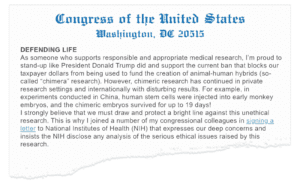 We’ll keep you posted on developments.  In the meantime, tell Congress to pass the Cost Openness and Spending Transparency Act—the COST Act—a law that would require putting a public price tag on all taxpayer-funded projects so you know how your money is being spent.