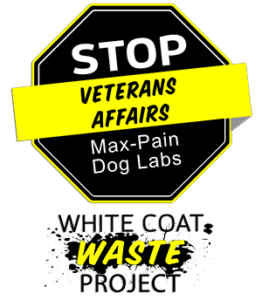 Since 2016, we’ve been working to find, expose and defund expensive, wasteful and painful taxpayer-funded experiments on puppies and kittens in labs run by the U.S. Department of Veterans Affairs. 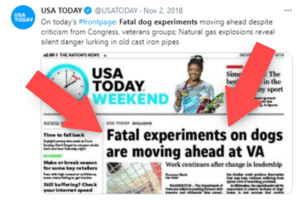 Thanks to our investigations, lobbying and advocacy from our 3 million members, we’ve successfully exposed and shut down cruel VA dog and cat labs—including the government’s last maximum pain experiments on puppies—across the country.

Now, as first reported by ABC News affiliate WRIC, a recently released report issued by the Department of Veterans Affairs following lobbying by WCW confirms the impact we’ve made and charts out a path to ending this waste and abuse for good.

The VA confirms that since our campaign launched, we’ve cut the use of dogs in painful VA experiments by 75 percent, to its lowest point in over a decade! The VA’s abuse of cats is also now 70 percent lower than it was in 2011. 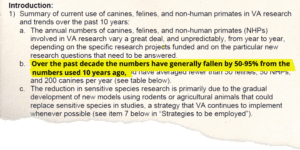 The report includes a detailed plan to strengthen oversight of these experiments and more aggressively promote and invest in alternatives to animal testing with a goal of phasing out the use of dogs, cats and primates by 2025.

This is the first time in history that a federal agency has committed to cutting testing on dogs, cats and primates. It’s a big deal, and an example for other agencies to follow.

The VA has used our taxpayer dollars to fund deadly and unnecessary experiments on dogs at facilities all across the United States. This is inhumane and needs to stop immediately. pic.twitter.com/UnClfu8Juf

We’ve been working to end to cruel & wasteful dog testing at the @DeptVetAffairs as it’s unnecessary & harmful to our beloved animals. Pleased the VA has submitted to Congress its plan to phase out the use of dogs & cats in these experiments. https://t.co/R7YkUnLssh

WRIC also confirmed that the Richmond VA has adopted out at least one dog who survived the laboratory, a move that follows the creation of an agency-wide lab animal retirement policy secured by WCW back in 2018.

None of this would be possible without the outstanding leadership of Waste Warriors Rep. Dina Titus (D-NV) and combat-wounded Army veteran Rep. Brian Mast (R-FL) who’ve led a bipartisan coalition of over 125 other lawmakers who cosponsored their PUPPERS Act, CATS Act and related legislation to end the VA’s wasteful animal testing.

We’re not resting on our laurels! VA labs in Richmond, St. Louis are still abusing puppies, and the last two VA cat labs are operating in Cleveland and Louisville.

Help us put the final nail in the coffin of these wasteful programs by urging your Congress members to support the CATS Act.

This cruelty/torture should end now! Not in 2025. 4 more years of
this is insane!

Dogs are companions, trackers and sniffers, police and military, therapy, sight dogs and most of all, companions. Cats are unpredictable, playful, serene. Rabbits are prolific and quiet. Mice and rats are rodents. So? Chimpanzees are our cousins. Monkeys are amazing if you have ever seen macaques leaping from a high place into water, for fun. Cows and calves, horses and foals, pigs and piglets, ducks, geese, turkey. Do not get me started on chickens. Calling a Human a chicken, as in coward, tells me that person as never seen a chicken slaughter line. Humans have been traitors to every animal we have know. The time to stop, to end the treachery, the abuse, pain and waste of life, is yesterday. Taking a baby animal from its mother hits most women. It is, once again, a violation against women, of a female of any species. Enough. Enough. Enough.

I have a rescued dog and kitty too. I feed outside cats in my community, and also feed the marine life by the bay. I have also taken it upon myself to clean parks, streets, beach, bay, and walkways of trash that humans throw on the grounds. I have also almost stopped meat/pork consumption. This experiments are totally unnecessary. Animals are sent by God to bring us humans joy and happiness. Animals are not here on earth for us humans to abuse, mistreat, hurt, experiment, disrespect, punch, kick, stab, stick with sharp objects, slaughter. Put yourself in those animals shoes for a change. God is watching your every move and you better believe that his wrath shall come upon those that hurt animals and humans. God bless our animals and humanity. Love is the answer. Love will conquer all. Amen!!! Stop this nonsense now. Thank you!!! Would you like for your kids to be abused in such horrible/horrific ways??? No, right!!! Then cease and desist all this nonsense now!!! You get what you put out!!!!!! Put out love and respect for all.

Is the actual said research available for us to review?
I’ve searched the internet for the research and it’s findings, but I don’t find it. All I’m really able to find is basically, a topic of research and the lame logic or reason they use dogs/cats. I wasn’t able to find any research objectives, data collection, survey or reporting methodologies. Where can I find the actual research data?

I have questions about the said research. To whom should I submit them?

STOP this. How would you like it if these things were done to you?