WCW Op-Ed: The Dangerous Animal Experiments At The Center Of The COVID Origins Debate

Originally published in the Daily Caller.

GOODMAN: The Dangerous Animal Experiments At The Center Of The COVID Origins Debate

As the lab leak hypothesis dominates the public conversation, and as the media, U.S. intelligence community and the Biden White House investigate the Wuhan lab, taxpayer-funded animal experimentation — which is opposed by most Americans — occupies center stage in the COVID-19 story.

In January 2020, White Coat Waste Project (WCW) met with the Trump White House to express our concerns about National Institutes of Health (NIH) funding being shipped to foreign countries for animal testing, including China and the Wuhan Institute of Virology (WIV) specifically. Maybe the White House was still digging in — we’re still learning more about the government’s early response to lab leak concerns — but we never heard back other than a cursory “thank you.” 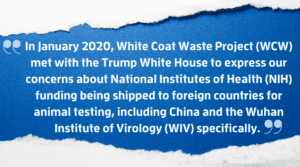 We eventually started contacting reporters and in April 2020, we were first to publicly connect the dots between the Wuhan lab and the NIH. Our exposé revealed how $600,000 in taxpayer funds in the form of NIH subgrants had been funneled to Wuhan by a shady New York-based non-profit for dangerous coronavirus experiments on animals.

It is unacceptable that the Wuhan virus lab that may have caused the pandemic remains eligible to receive US funds.

In particular, we found published papers documenting how WIV staff were spending U.S. taxpayer money to visit abandoned mines in southern China, collect coronavirus-infected bats, and transport them 1,000 miles back to WIV in downtown Wuhan. They then isolated the viruses, manipulated them to make them more transmissible and deadly, and injected them into “humanized mice” for dangerous and cruel “gain-of-function” experiments. The Washington Post Editorial Board explained, “This involves modifying viral genomes to give them new properties, including the ability to infect lung cells of laboratory mice that had been genetically changed to respond as human respiratory cells would.” This virus engineering in animal tests opens the door to direct infection of humans. 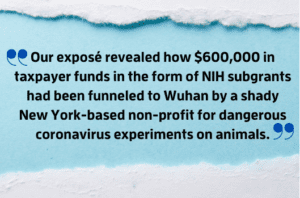 According to an archived version of its website, the Wuhan animal lab covers 1,216 square meters with “126 cages for Japanese white rabbits, 340 cages for…rats, 3268 cages for… genetically engineered mice, 12 cages for ferrets, 12 cages for bats… totaling 52 subspecies.”

Even if the Wuhan Animal Lab is innocent of starting the pandemic, it’s GUILTY of taxpayer-funded torture👇https://t.co/EJFgucS8xN

Former Food and Drug Administration commissioner Dr. Scott Gottlieb concisely explained, “by assembling a large repository of dangerous coronaviruses into a single lab in a densely populated city, and experimenting on animals, Chinese researchers greatly increased the risk of a lab leak.” 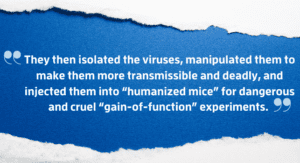 The State Department warned that the Wuhan animal lab posed safety risks in 2018 and later raised red flags that, “The WIV has engaged in classified research, including laboratory animal experiments, on behalf of the Chinese military since at least 2017.”

We now also know that in November 2019 — months before the outbreak — WIV staff members connected with these animal experiments were reportedly hospitalized with COVID-19 symptoms and the wife of one Wuhan lab staffer reportedly died of a COVID-like illness in December 2019. 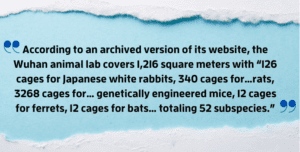 Last year, the Wuhan wet markets were prematurely implicated in causing the COVID-19 pandemic, prompting calls for their closure. Now, it’s time that dangerous animal labs get the scrutiny they deserve.

Did taxpayer-funded animal experiments cause the worst catastrophe of our time? It’s increasingly plausible and we need to take steps to ensure it doesn’t happen again.

I do not want my tax payer dollars to fund ANY animal experiments!

These ghoulish, cruel, heartless experiments MUST STOP!!!This message is from Janet Halatyn with email address rosemaryagusta@outlook.com

This is barbaric! I can only believe these horrendous undertakings continue because the public isn’t aware! They are now and this MUST stop!

This is pure and evil animal torture. Until humans stop their negative relationship with animals and nature, things will continue to get worse and worse on this planet for all of us. No excuse for animal abuse!

As a child growing up, I was told you can judge a society by the way it treats animals. If this continues, it will be the end of humanity and it will probably come out of CHINA. Those kinds of experiments and tortures should be done to those that perform them on other living species.

It is beyond the scope of indescribable pain that the NIH and other like governmental “laboratories “ inflict daily on animals; these experiments are a part of a well-oiled money machine that greases the palms of nearly all colleges and universities ; toxicology and vivisection produce no valid results that could not be more accurately obtained by utilizing non-animal alternative tests.