UPDATE (7/29/21): This legislation has been passed by the House of Representatives and now awaits action by the Senate.

In May, the U.S. Senate passed legislation that permanently defunds the Wuhan animal lab. Now, their counterparts in the House of Representatives are taking action.

Following over a year of advocacy by WCW, the bipartisan House Appropriations Committee just voted to prohibit National Institutes of Health funding for the Wuhan Institute of Virology in the agency’s 2022 funding bill. The amendment was led by Rep. Guy Reschenthaler (R-PA) and garnered bipartisan support.

I secured provisions into a committee-approved spending plan that will keep U.S. taxpayer dollars from going to the Wuhan lab & investigate why – at the direction of a Chinese researcher – critical COVID gene sequences were deleted from the National Institutes of Health.

The COVID-19 pandemic devastated millions of lives, impacted our economy, and changed life as we know it. While we have much to learn about the origins of this pandemic, one thing is certain-not a cent of American tax dollars should go towards the Wuhan Institute of Virology.

Taxpayer funds from the NIH, the State Department and the Pentagon supported WIV’s dangerous coronavirus experiments on animals that experts–and a growing majority of taxpayers–believe caused the pandemic.

But with yesterday’s vote, Congress has now taken action to prevent funding for the Wuhan animal lab from all of these agencies. In addition to the NIH defund, the Democrat-led House funding panel recently voted to cut off DOD and State Department funding for WIV.

Read my full statement below ⬇️https://t.co/Bf4mWJKkYI 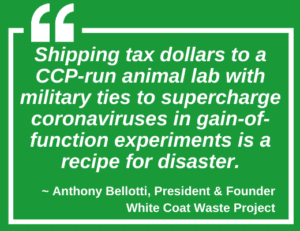 The bill now goes to the full House of Representatives for a vote, then to the Senate, then to the President for his signature! We are working our tails off to make sure it becomes law, and will keep you posted.

In the meantime, you can take action! Urge your Members of Congress to cosponsor the Defund the Wuhan Institute of Virology Act and permanently prohibit taxpayer funding for this dangerous and cruel lab!

DEFUND ALL ANIMAL TESTING ASAP. DEFUND THE WUHAN INSTITUTE OF VIROLIGY ACT. OUR TAX MONEY SHOULD NOT BE USED TO TORTURE THESE PRECIOUS AND INNOCENT ANIMALS. IT IS BARBARIC AND PURE EVIL THE WAY THESE PRECIOUS ANIMALS SUFFER. NEED TO STOP THIS EVIL PRACTICE ASAP. SHAME ON YOU