Our recent investigation of wasteful and barbaric taxpayer-funded experiments on beagles funded by Anthony Fauci’s NIH division set off a media firestorm. 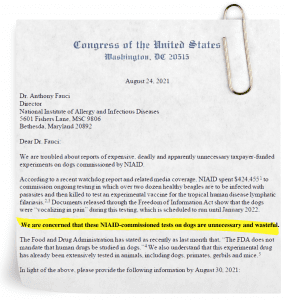 Click on the image of the letter above to read the letter in its entirety.

As first reported by the Daily Caller, in a new letter sent to Fauci, Congressman Scott Perry and 14 colleagues cite our new investigation and demand answers about the project, including has much money has been spent to date, how many dogs have been killed, and why the NIH commissioned the deadly dog testing when the Food and Drug Administration has said it’s not required. 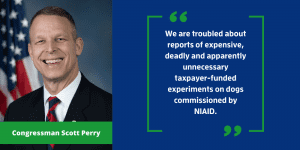 EXCLUSIVE: House Republicans are demanding answers from Anthony Fauci after the @DailyCaller and @WhiteCoatWaste reported on his agency’s funding of abusive drug testing on dogs: https://t.co/FbrqZFIais 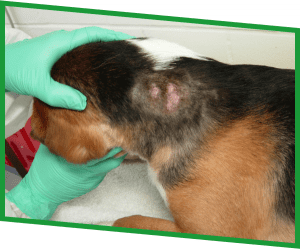 Beagle abused in painful experiments in an NIH lab run by Anthony Fauci. Photo obtained by WCW via FOIA.

Join the fight! Tell your Members of Congress that you don’t want your tax dollars wasted on abusing dogs and puppies in cruel and unnecessary experiments!

Frankenstein fauci you have finally done it.I’ve owned beagles for 40 years what I seen I threw up, it made me sick Frankenstein fauci what I want them to do to you is stick your head in a box and let them sand flies eat your face eat your skin and don’t even cut out your throat your vocal cords cuz we want to hear you scream bloody murder I want to hear you scream people go to prison what West did you done I want your head and a box with sand fleas. God bless those little beagles.