Originally published in The Washington Times on Aug. 26, 2021

In dog testing debacle, Fauci isn’t ‘following the science’
Beagles are being eaten alive because of Dr. Fauci’s wasteful spending

File under: Rules for thee, but not for me.

Last winter, in a lecture for medical students at George Washington University, Dr. Anthony Fauci remarked, “You follow the science. You stick with the science. You make decisions, policies, and recommendations based purely on the science.”

Case in point: Documents obtained by the White Coat Waste Project through the Freedom of Information Act show that Dr. Fauci’s division at the National Institutes of Health (NIH) recently wasted over $424,000 on deadly and unnecessary experiments on dozens of beagles.

In these ongoing taxpayer-funded experiments slated to run through January 2022, 28 healthy beagles are given an experimental drug and then intentionally infected with parasites by infesting them with flies. The dogs then are allowed to develop infections, have their blood drawn for several months, and are killed even though they could be adopted out.

Monthly reports from the NIH-funded lab state that the dogs were “vocalizing in pain” during the Fauci-funded experiments. 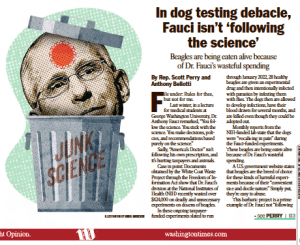 These beagles are being eaten alive because of Dr. Fauci’s wasteful spending.

A US government website states that beagles are the breed of choice for these kinds of harmful experiments because of their “convenient size and docile nature.” Simply put, they’re easy to abuse.

This barbaric project is a prime example of Dr. Fauci not “following the science” because the testing is redundant, wasteful, and unnecessary.

The Food and Drug Administration, which approves drugs for human use, has stated clearly as recently as last month: “The FDA does not mandate that human drugs be studied in dogs.”

The experimental drug in question “has been extensively tested and confirmed for its prophylactic potential and safety in different animal models such as mice… gerbils…and rhesus macaques.” It has also already been tested in dogs.

The NIH admits on its website that 90 percent of drugs that pass animal tests ultimately fail in humans because they’re dangerous or ineffective.

And, under President Donald J. Trump, and with bipartisan support in Congress, the Environmental Protection Agency, the Food and Drug Administration, and the Department of Veterans Affairs made various commitments to ending dog testing.

Yet, Dr. Fauci’s team at NIH just spent nearly half a million dollars to sentence dozens of dogs to death in wasteful experiments that most taxpayers oppose.

With a bloated $6 billion annual budget, we shouldn’t be surprised about this government waste and abuse. Lest we not forget that Dr. Fauci’s NIH division also funded the reckless gain-of-function animal experiments in Wuhan, China, that most taxpayers now believe caused the COVID-19 pandemic. Experts have warned for decades that these kinds of dangerous animal experiments could cause a pandemic, yet Dr. Fauci advocated for them to continue.

So much for “following the science.”