Dangerous “gain-of-function” animal experiments that supercharge viruses to make them deadlier and more contagious to humans are at the center of investigations into the COVID’s origins. Many experts in the scientific and intelligence communities—and a majority of Americans—believe that U.S. taxpayer-funded gain-of-function experiments on animals caused the pandemic through an accidental lab leak.

Since early 2021, we’ve been calling on decision-makers to take action to cut funding for this risky research, and now Congress is taking action.

Gain-of-function research has been directly linked to the spark of the coronavirus pandemic. The Pausing Enhanced Pandemic Pathogen Research Act is the best path forward to ensure that we avoid U.S. taxpayer funds from falling into the wrong hands.

@RepCuellar and I introduced bipartisan legislation to pause taxpayer funding for gain-of-function research over the next 5 years #ourfuturemattershttps://t.co/d4EYjn6Tak

Gain-of-function experiments were paused in 2014 by the Obama-Biden Administration because of safety concerns—including the possibility of causing a pandemic—but resumed in 2017 following lobbying by Anthony Fauci and others.

Rep. Gallagher, @RepBuddyCarter, and @RepCuellar introduced legislation that would pause all U.S. taxpayer funding for gain-of-function research for five years.

This Bipartisan Piece of Legislation Means We’re That Much Closer to Defunding Gain of Function Research
https://t.co/g5zuwyn25P

But taxpayers want change. An April 2021 poll by Lincoln Park Strategies found that 55% of Americans—59% of Republicans, 60% of Democrats and 49% of independents—want to defund gain-of-function research. 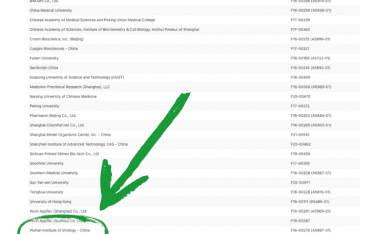 The Other Wuhan Animal Lab Funded by U.S. Taxpayers
In February, we exposed how Wuhan University is one of 27 labs in China—like the notorious Wuhan Institute of Virology—authorized to receive taxpayer funding from the U.S. National Institutes of...
1 LikesLeave a comment