Momentum keeps building to give animals in government labs a second chance.

Following WCW’s campaign and action by the U.S. Senate, the U.S House of Representatives just reintroduced the AFTER Act, also known as Violet’s Law, to make lab animal adoption an option … across the entire federal government!

This is a B.F.D. You see, government white coats usually kill survivors—even healthy and adoptable ones—rather than let taxpayers adopt them, or retire them to sanctuaries. It’s just more convenient.

Survivors released from taxpayer-funded labs following WCW efforts (L-R): Violet was rescued from a lab by a WCW board member. Delilah was retired by the USDA when WCW shut down its Kitten Slaughterhouse. And Gregory is one of 26 monkeys who WCW got released from the FDA’s now-defunct nicotine lab.

The AFTER Act’s full name is the Animal Freedom from Testing, Experiments and Research Act (HR 5244/S 1378). It’s bipartisan legislation led by Reps. Brendan Boyle (D-PA) and Nancy Mace (R-SC). The Senate version of the AFTER Act was introduced earlier this year by Sens. Susan Collins (R-ME) and Gary Peters (D-MI). 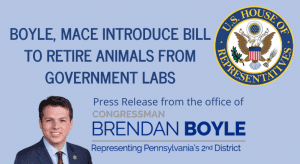 There’s another name for the bill, too: Violet’s Law.  Named for the rescued ex-lab dog who inspired it. 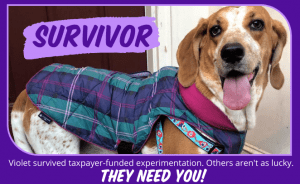 In January, we got the Environmental Protection Agency to commit to retiring rabbits who survive experimentation. We’ve saved 26 squirrel monkeys from the Food and Drug Administration’s $5.5 million nicotine addiction studies, who now live at a primate sanctuary, and the survivors of the USDA’s $22 million  “Kitten Slaughterhouse” lab, after we got that hellhole shut down.

Almost all of the animals who survive cruel lab experiments are killed, even when they are healthy enough to live happy lives in loving homes or sanctuaries. However, new legislation could help put an end to thishttps://t.co/f63m6mgJsE

We’ve also secured the first-ever agency-wide commitments to retire and release lab survivors at the:

But, as we wrote in our op-ed published in USA Today:

A supermajority of taxpayers want Violet’s Law to become the law of the land with 71 percent of Democrats and 72 of Republicans telling Lincoln Park Strategies they want retirement, not death, for animals who survive experiments in government labs.

“These animals deserve a second chance”https://t.co/WXK352UD3U 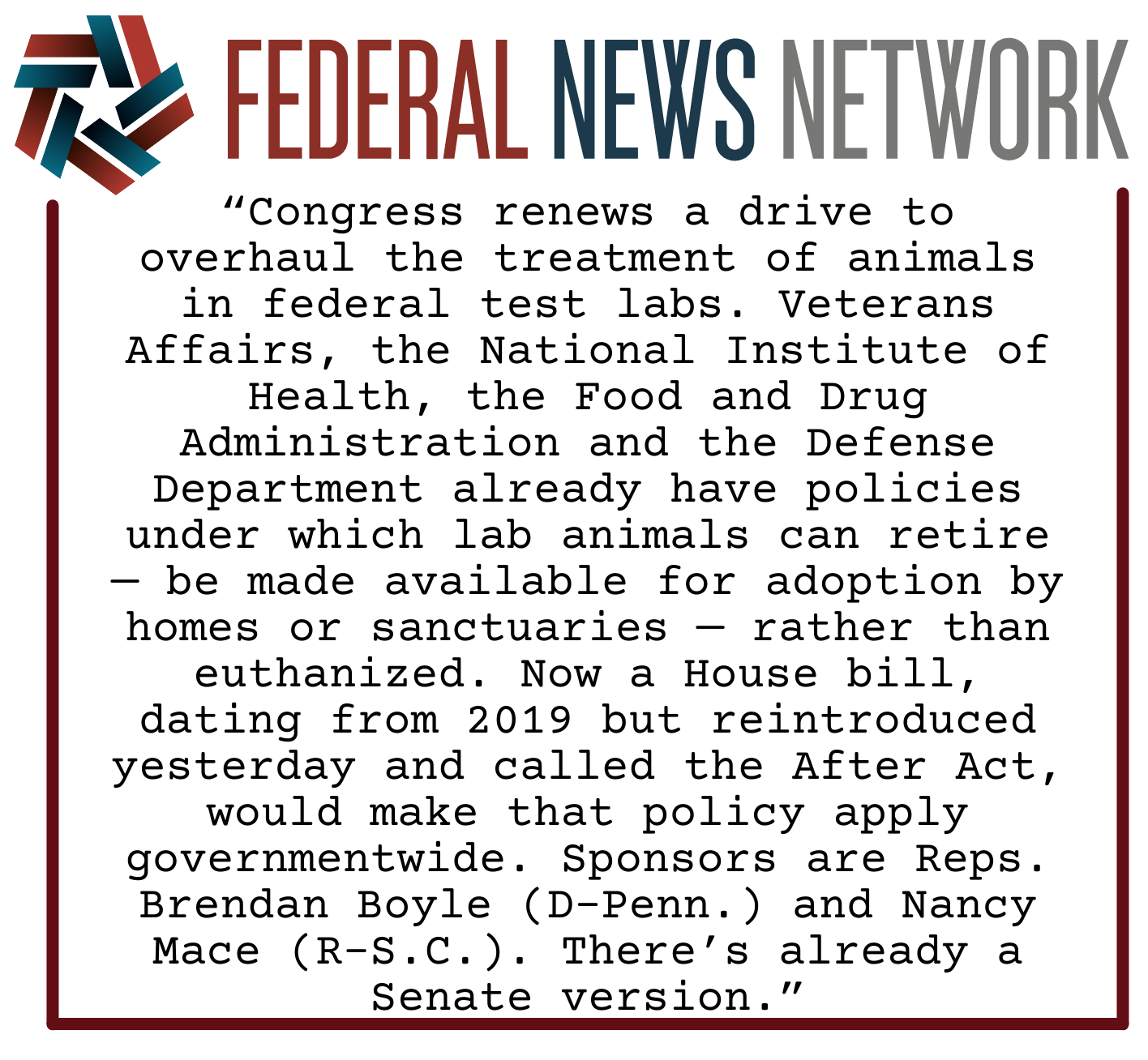 Please help us make the government give them back by urging your Congress members to cosponsor Violet’s Law to provide a second chance to animals abused in wasteful government experiments!

There should no longer be animal testing to start with. It is so barbaric and none of it serves a purpose for humans. Stop this needless spending and pain inflicted upon these innocent lives. All of it is so unnecessary. Injecting sand flies into Beagle puppies? Seriously? What purpose would that serve.

Please no more deadly experiments on animals! This day and age there’s a better way! And when they do survive please give them a chance to find a loving home. If you have a heart or a conscience it’s the only logical answer!

Stop using animals for testing in labs. Let the ones you have go up for adoption. No torture, No kill should be a policy.

Stop the suffering!!! Adopt them out

This is cruel and unjust,Please let these lab animals be adopted or sent to a safe sanctuary

This animal testing needs to end!!!!

Stop torturing the animals! Release them and adopt them out!

Have a heart, give them a new start!

Please allow these animals a second chance at life by placing them in rescues that can adopt them out! They deserve better after a lifetime of servitude and cruel treatment! Do the right thing!

Absolutely disgusting haven’t they used these poor innocent animals enough let them be adopted and have somewhat of a good life. Not impressed with fauci