Congress is continuing to crack down on funding for the entities responsible for dangerous coronavirus experiments on bats and humanized mice that may have caused the pandemic.

Earlier this year, the U.S. Senate and House of Representatives both passed legislation that defunds the Wuhan Animal Lab.

My amendment, which passed with bipartisan support, stops DOD funds from going to @PeterDaszak‘s EcoHealth Alliance, an org. that funneled taxpayer dollars to the CCP controlled WIV – the likely epicenter of COVID.

Now, following a WCW campaign, the House has voted to prohibit the Department of Defense from funding EcoHealth Alliance, the shady U.S. non-profit that funneled tax dollars to the Wuhan lab and has refused to answer questions from Congress about it. EcoHealth has received tens of millions of dollars from the DOD for risky virus experiments on animals. The effort was led by Rep. Guy Reschenthaler (R-PA) and garnered bipartisan support.

This is a huge win given EcoHealth’s role in funding gain of function research at a lab conducting secret biological studies for the PLA & following @PeterDaszak’s letter last year denying the possibility of COVID coming from a lab. 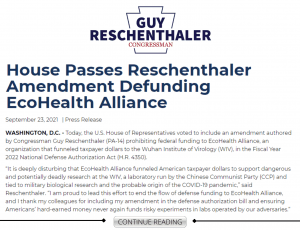 Take action! Urge your Members of Congress to cosponsor the Defund the Wuhan Institute of Virology Act and permanently prohibit taxpayer funding for this dangerous and cruel lab!

Time for America to sever any ties or subsidies to Wuhan Lab!