VIDEO: Dr. Fauci funds beagle experiments all around the world

If you do something once, it’s an accident.
Do it twice…it’s a coincidence.
Three times — it’s a habit.

We’ve already caught him three separate times — and we have the receipts.

Now, make it four — because this week, we caught him again.

What do you call it when you do something four times?

We call it BeagleGate. 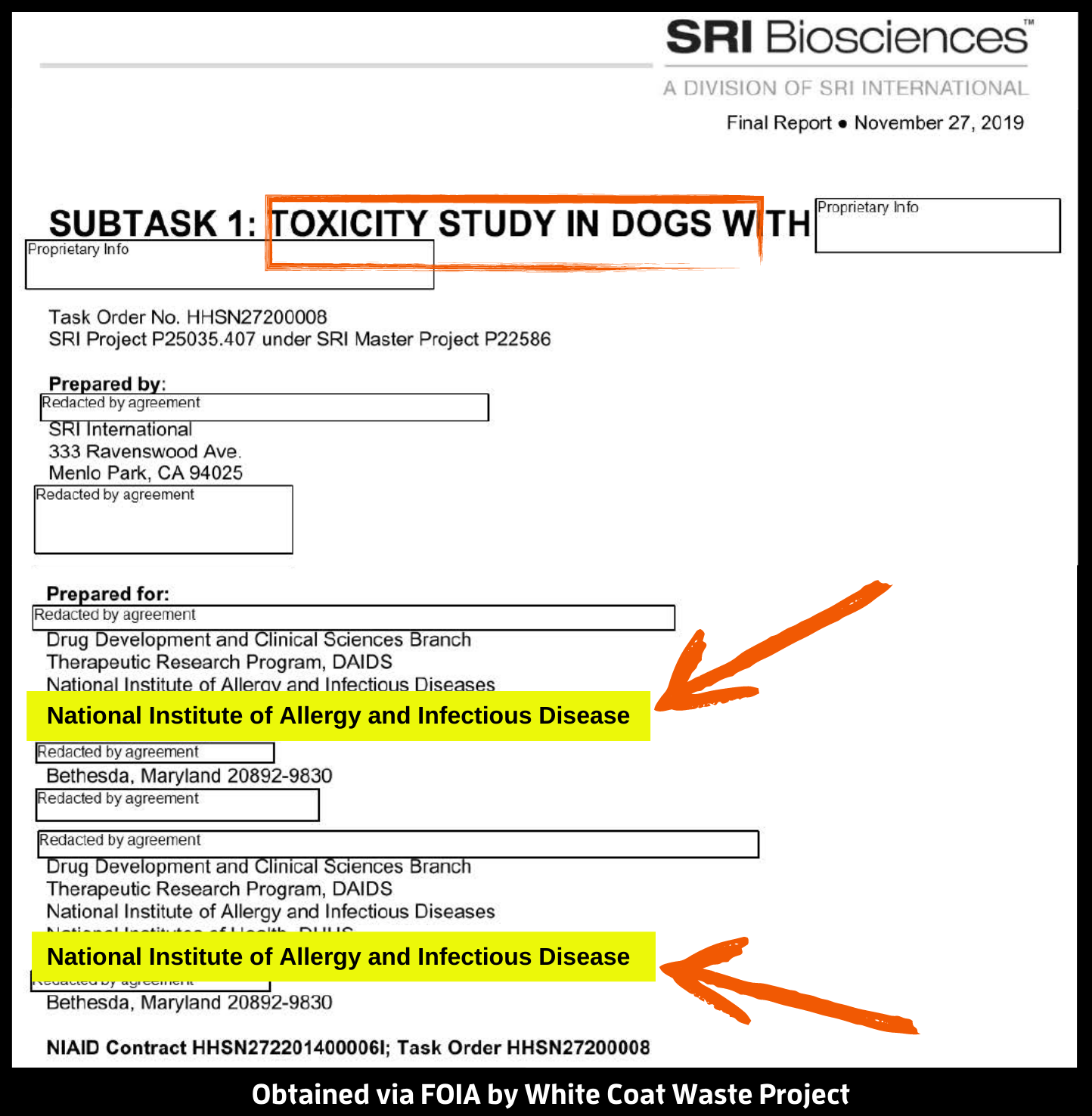 Fauci’s taxpayer-funded white coats injected and force-fed the puppies an experimental drug for several weeks, before killing and dissecting them.

These dogs were subject to some of the cruelest treatment imaginable. In a procedure called a “cordectomy,” sometimes called “de-barking,” the puppies’ vocal cords were slashed.

Why? So Fauci’s white coats wouldn’t have to hear them cry.

“De-barking” is painful and cruel, and opposed by the American Veterinary Medical Association. “Many veterinarians refuse to do the surgery on ethical grounds,” the New York Times reports, adding that the barbaric practice is rarely even taught in vet school. But NIAID is funding it — and you’re paying for it.

In 2016, WCW released Spending to Death. In the basement of NIAID’s lab in Bethesda, Maryland,  infectious sand flies were strapped to beagles, and fed on them for 22 months. The dogs developed infectious lesions, before  Fauci’s staff killed and dissected them. 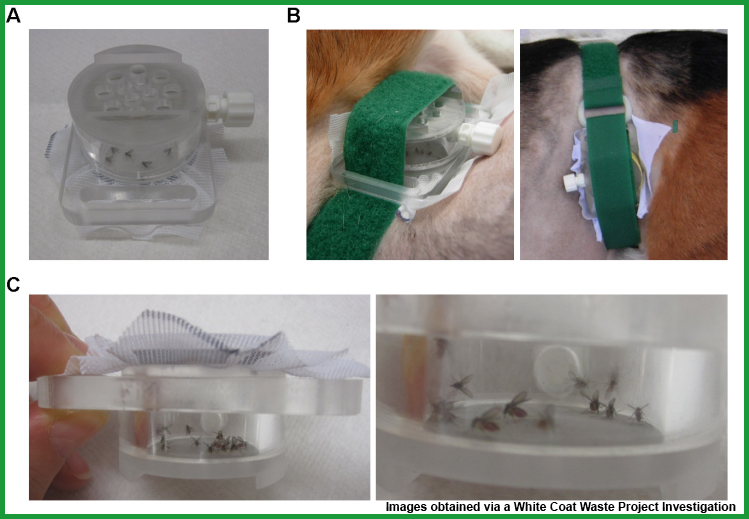 In September 2020, Fauci’s agency did it again. WCW discovered a $424,000 grant for animal experiments at the University of Georgia, where healthy beagles are drugged, then intentionally infested with parasite-carrying flies.

Records show the dogs were “vocalizing in pain” during the experiments, before being killed.

The worst part? The experiments were completely unnecessary. Experimenters admitted that the drug they were studying “has been extensively tested and confirmed…in different animal models such as mice…Mongolian gerbils…and rhesus macaques….”

You’d think that was enough for Dr. Fauci, right?

In August of 2021, WCW revealed that NIAID shipped part of a $375,800 grant to a lab in Tunisia (where the NIH has no oversight and there are no laws protecting animals used in experiments!).

Once again, helpless beagles are drugged, but this time, their heads were locked in mesh cages filled with hundreds of infected sand flies. 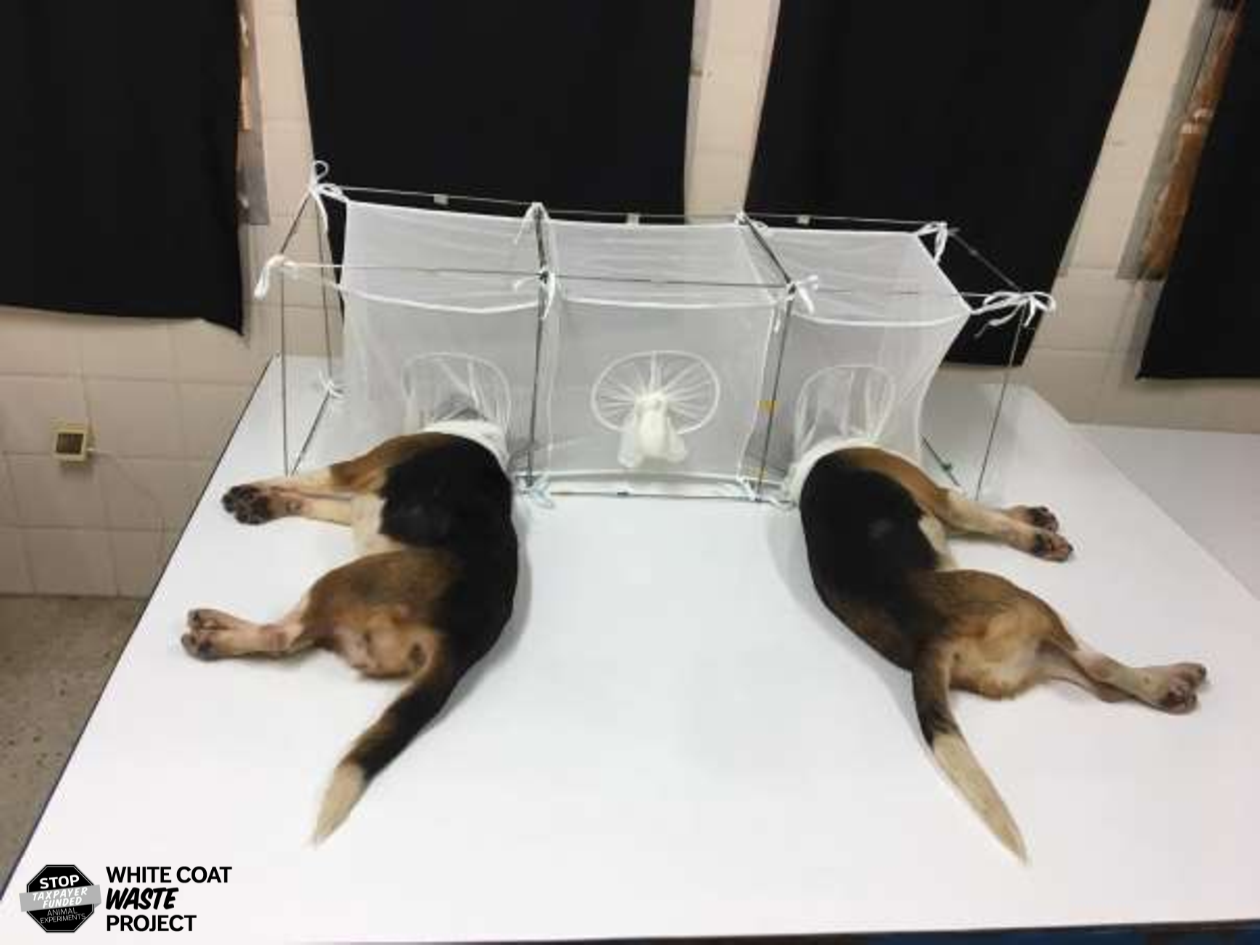 Of course, this isn’t Fauci’s first foray into foreign funding.

Way back in April 2020, WCW shocked the world when we revealed that American taxpayer dollars funded dangerous gain-of-function experiments in the Wuhan animal lab. To be precise, tax dollars went to Fauci’s NIAID, which gave a grant to the shady EcoHealth Alliance, who shipped the money straight into Wuhan and probably caused the pandemic..

I don’t know how you sleep at night you’re a heinous horrific horrible evil nasty I don’t care if it’s in the name of science that is wrong morally I don’t seriously there’s what is wrong with you and you people especially our president that would fund this wrong wrong you’ll meet your maker man you will meet your maker!!!!

How in the world could anyone in their right mind torture and murder these innocent little Beagles for nothing. These aren’t experiments, they are torture chambers for useless purposes. Don’t use
my tax money for these inhumane acts.

These experiments are barbaric and NEED TO STOP!! Defund these immediately!!

This knowledge is beyond heartbreaking to know about. ONLY Modern Better Resulting Tests need to be used today. NO MORE funding these vile experiments! These poor dogs, OMG! PLEASE= REHOME ALL SURVIVORS to good loving homes!!!! This MUST END NOW!~

These people are doing the devil’s work. Would they take their children in to see what kind of work they do.
Just look at Faucie’s face it looks like a evil & sickening human.
If I had one day with these worthless piece of ____
I would tie them to a chair & teach Gods word to them until they put good above evil. If you believe in the devil you have to believe there is a GOD. They go together. God is Supreme. We were given animals to love and to comfort us.
Please shut down your labs. v
Veteran labs,Wuhan labs, etc.stop their terror & using our tax dollars.

Leave our tax dollars & the innocent animals you torture ALONE.

This “research” is cruel and totally unnecessary. It is long past time for these experiments to cease. They must be defunded immediately. The animals currently being tortured (there is no other word to describe it) must be released, cared for, and loving forever-homes must be found for them. What is it about Dr. Fauci and those who work with him that prevents them from recognizing suffering? Who devised these experiments, and why are they not held accountable? This is a travesty, and the fact that taxpayer money funds this cruelty makes it all the more reprehensible.

Fauchi has commited the greatest evil, he must be fired and tried in the highest courts IMMEDIATELY.

This is so cruel I can’t imagine the agony these poor creatures go through. Stop it now.

This assclown and his partners should be charged with animal cruelty and crimes against humanity, I hope and pray this man is brought to justice , I never heard of him till this Corona virus bullshit came out and quickly realized this guy is a phoney and corrupt, follow the money, prosecute him along with all the others involved in this crap

No taxpayer money should pay for innocent animals to be put through this. It should be defunded immediately and the dogs should be found good homes- SHAME!!!

HORRIFIC! Stop this torture immediately! Stop these cruel and inhumane experiments on Man’s BEST FRIEND! Show some compassion and humanity to these UTTERLY LOYAL beings!

Fauci has given licensed sociopaths the financial means to torture animals..I would put every one of these people in a cage to suffer the same agony.

Please stop these cruel experiments. They are unnecessary and barbaric.

Very unsettling and disturbing to say the least. Beagles or any animal that has a beating heart should not be treated this way in any form or fashion. So barbaric and inhumane. How do you freaking sleep at night!

Why is our government paying to torture animals? Dr Death displays zero compassion for life.

I’m disgusted by the cruelty these innocent dogs went under this horrible human being! Stop animal testing. It’s the 21st century. We should be developing new techniques to conduct experiments. Animals should be left alone. DO NOT USE MY TAX MONEY TO FUND THIS CRUELTY. As an animal lover, I condemn such horrible acts.

Ok you’re done for Dr. Fauchi! Do you not know how many dog lovers there are in the world? Oh no, no, no. You will not get away with this.

Fauci is a lying, hypocrite murderer! He needs to be prosecuted

Undoubtedly, this needs to stop NOW! But targeting Dr. Fauci is pure political circus. Look at the list of laboratories that experiment on dogs – it is not only prevalent in the USA but worldwide. At this time there are 60,000 Beagles in labs – it has been this way for decades. If you truly care about the dogs and can forego your politics then work to end this horror.

I agree with you. This is where politics should end and both sides should work together to end this horrific barbaric practice. It’s disgusting and disturbing beyond all understanding.

This is sickening. WHERE are the beagles and monkeys coming from? Anyone knowingly breeding and supplying animals for such “experiments” should be prosecuted! Furthermore, everyone who slammed these animals around needs to be prosecuted and fired, all the way up the chain, for anyone who signed off on this.
WHO are these people? They should have their faces posted all over the web, public humiliation to the max, then they deserve to be caged and tortured- just saying.
We need answers- and accountability!!!… something the liberals just cannot seem to handle.

What kind of maniac tortures these innocent wonderful pets! Needs to stop!! Hell isn’t half full…👿

Only a monster-a mindless brute-a truly evil maniac could perform this torture on innocents. How has this been allowed to carry on all this long time? Heads should roll-people knew this was happening yet nothing was done! You are also guilty who condoned this maniac’s lunacy!

This is unconscionable, completely brutal and unnecessary animal experimentation. Fauci is a monster and I demand he be stopped NOW! I only wish he could be subjected to the same as fair punishment

They were flesh eating flies. SICK scientist playing being a demented GOD like complexes!! What they are doing with Rhesus mommies is deplorable. Folks wonder why folks in our society are so mean, cruel with mental health issues; yet these dysfunctional scientist with MD behind their names need to be held accountable in legal courtrooms for their cruelty, abuse, and inhumane studies on animals. Scientist do it to animals they are no different than criminals on death row that have no feelings or conscience on the hideous crimes they have committed on others. These scientist are no different yet they are being funded (thousands and millions or dollars to do these SICK-WARP experiments. Tax payers and the legal courts need to take a stand!!