Last year, we exposed how the Department of Veterans Affairs’ lab in Cleveland was abusing kittens in cruel and wasteful constipation experiments.

Now, following a WCW campaign and pressure from Congress, the VA has cut the crap and shut down this waste and abuse! 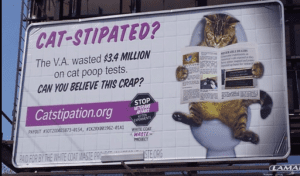 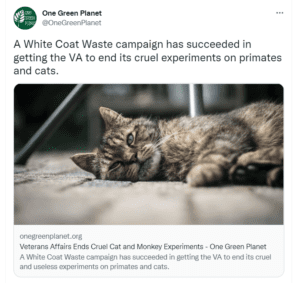 As we uncovered, the VA was purchasing healthy kittens, performing invasive surgeries to implant electrodes to remotely stimulate their colons. Some of the cats had artificial stool made from “bran, potato flour and saline” inserted into their anuses for the experiments. Records show the experimental procedures caused cats distress, seizures, bloody urine, and even depression. At the end of the experiments, the cats were killed and dissected.

The cost to taxpayers like you? $1,025,210 since 2017. But no more of your money will be wasted to abuse cats in these crude experiments.

This is just the latest victory in our effort to find, expose and defund all of the VA’s cat experimentation. Earlier this year, we shut down invasive and deadly brain experiments on kittens at the Los Angeles VA. 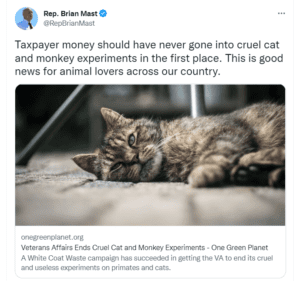 There are now just two active cat experiments left at the VA—the last two painful cat labs in the entire federal government—and Congress has directed the agency to phase them out by 2025. But you can help us cut them off sooner.

Urge Congress to take action and defund all experiments on cats at the VA!

These experiments serve no useful purpose and I don’t want my tax dollars spent on cruel experiments that torture animals and then murder them when done with them.

Stop the abuse! Animals are not ours to abuse, exploit gain profit, experiment on. Or consume. I love you all ! My heart and prayers are with you! Thank you for ending the abuse!

These last 2 cat experiments left at the VA must be stoped immediately not wait until 2025.There is no
need to experiment and kill these living beings . They were not put here on this earth for this purpose. All these animal experiments prove absolutely nothing, only wasting taxpayers money and innocent lives.

Stop the Labor experiments on the cats

THIS HAS TO STOP WHAT A WASTE OF MONEY AND SUFFERING FOR NOTHING!!!!!

I cannot believe a so-called civilized country such as the USA participates in these cruel, barbaric experiments on cats/kittens/beagles/monkeys …. It is disgraceful!!!!!!!

Stop all experiments on animals. They are not needed.

These cruel and horrific experiments are only serving as an even sicker fetish. STOP EXPERIMENTING ON FUR BABIES!!

This is wrong. I know it. You know it. Everybody knows it. STOP. Right now — STOP.

This is absolutely disgusting and I have been a voice for these innocent creatures for decades and will not stop until these senseless useless tax funded experiments end. I will post more of White Coat Waste until this stupid shit ends. These animals are without voice so I will be their’s and am studying animal law to take this crap down.

Unacceptable. As waste of lives and tax dollars. Stop all animal experimentation. The NIH and Anthiny Fauci torture and kill animals all year and have for decades. I call him dr. Death for this and his Covid flip flopping. He is science, he told us that and instructed us to follow the science. Think about that forvs moment