Rep. Nancy Mace’s October 21 letter to Dr. Fauci brought more attention to taxpayer-funded animal experimentation than we’ve ever seen. It prompted hundreds of articles and generated a huge public outcry, which continues to this day.

But the Congresswoman from South Carolina isn’t done fighting government waste—not by a longshot.

Citing our #BeagleGate campaign, on October 29, Rep. Mace was joined by eight additional Members of Congress on a letter to Rep. Carolyn Maloney (D-NY), Chairwoman of the Committee on Oversight and Reform, requesting a full committee hearing on taxpayer-funded animal experiments. 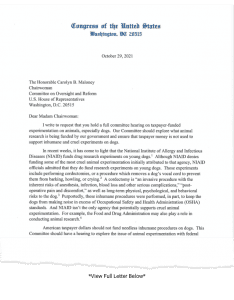 In a press release about the letter, Rep. Mace said, “As I’ve started to dig into this issue, the more I learn, the worse it gets.”

We completely agree—and we suspect that most people feel the same way.

We hope that Chairwoman Maloney will accede to Rep. Mace’s request, and hold a hearing on this critical topic.

Like we’ve said all along: taxpayers should not have to pay over $20 billion every year for wasteful and cruel experiments on dogs, cats, monkeys, and other animals.