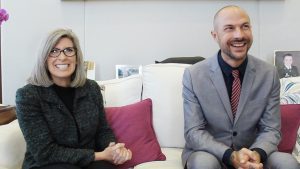 Senator Joni Ernst and WCW VP Justin Goodman are all smiles as they discuss the FAUCI Act.

There’s a lot to love about the FAUCI Act. The bill would:

Iowa taxpayers should never be funding dangerous experiments overseas, especially in one of the world’s most closed societies, ruled by a ruthless authoritarian regime with no tolerance for truth or transparency.

I’m working to put an end to that. https://t.co/VSi02HCYGk 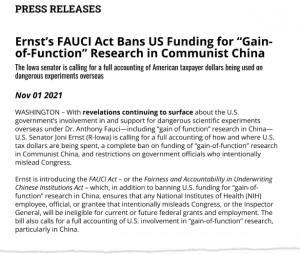 The Epoch Times also wrote about the FAUCI Act, which you can read here. The most telling line in the story? “A spokesman for EcoHealth Alliance had not responded by press time to The Epoch Times request for comment on Ernst’s proposal and remarks.”

We’re grateful for Senator Ernst’s tireless efforts to fight for transparency and against wasteful, dangerous spending. As Justin said: “Shipping U.S. tax dollars to a notorious Chinese Communist Party-run bioagent lab in Wuhan for treacherous gain-of-function animal experiments was a recipe for disaster. We applaud Senator Ernst for introducing the FAUCI Act to protect taxpayers and public health from dangerous and wasteful spending in China and to hold NIH officials and grantees accountable for not being forthright with Congress.”